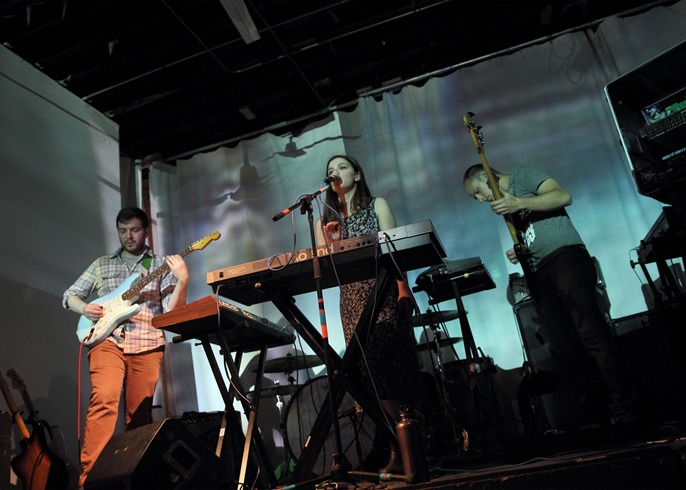 You know those horror movies that take place on mystical islands, where ghastly and peculiar horrors are inflicted upon their visitors? As I discovered last Friday evening, those places may actually exist.

After having been captivated by the intensely cinematic experimental pop group Tiny Hazard, I’m almost certain that somewhere … it might be in the South Pacific … or in the black hole into which Amelia Earhart was abducted … somewhere there is a demonic island paradise where the rules of nature are suspended and a horrific tribal force reigns supreme.

On this island, in a little house, on a hill, this is where Tiny Hazard was born. It is the only plausible origin story for the vividly otherworldly music of this Brooklyn quintet that, played with such determined musicality and conjuring such deliberate, eerie imagery, seems to almost certainly have been written under supernatural pretenses. 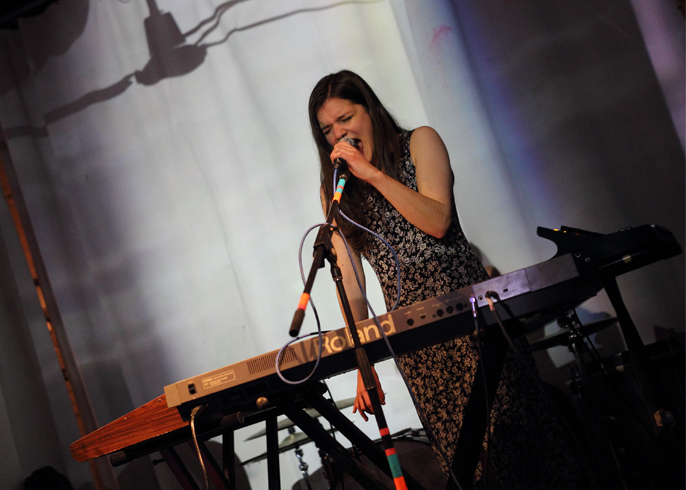 Immediately as the band opened their set at Secret Project Robot — a fitting venue for a band of such mysterious intrigue — I was overcome by a beautifully visceral sensation that was guided throughout the evening by the diverse sounds of Tiny Hazard. Every song the band played a commanded dark energy that took shape in two distinct sonic styling, the more distinctive of which channeled the aforementioned mystically demented qualities. This genre-bending, prog-noise-rock was showcased in numbers like “In A Little House” or “The Beast,” with choruses punctuated by breath-stealing paroxysms like sudden smashing guitar hits, stomping bass lines, and shrill synth effects. Verses were eerily sparse, populated by delicately dissonant and jazzy piano chords and bone chilling lyrics like, “with weeds tangled in her hair/she had a thistle crown/came down whispering her name/ho-ha-hee.” The lattermost phrase was one amongst many tribal chants laced in booming reverb that haunted a number of other songs.

Notwithstanding the tremendous power of the instrumentation that grounds them, easily the most breathtaking element of these thrashing songs are the vocals of chanteuse Alena Spanger who is also the lead songwriter for the band. Her ineffably emotive vocals are at once childlike, haunting, operatic, cooing, and terrifying, leading one to believe she was perhaps abandoned at birth by Bjork, only to be found and raised by Thom Yorke during his angsty days. One cannot help but be utterly mesmerized at every turn by her unique musical personality and heart-punching vocals, nevermind the dissonance of her booming voice paired with her seemingly innocent physicality, always hiding discreetly behind a sweet smile. This, of course, makes her that much more creepy, just like the small little orphaned girl who is secretly a torturous fiend or flesh-eating demon.

Spanger’s vocal charisma is equally as powerful in Tiny Hazard’s other defining sonic styling — the tenderly honest piano ballads of songs like “Don’t Take Me Home” and “Lynx.” As demonic as Spanger is at her angriest, she is also devastatingly vulnerable during these somber moments, consistently melancholy and longing in her approach to love. “I’m gonna fill you up … ever so slightly,” she sings on “Lynx,” as she plucks, sometimes sweetly, sometimes angrily, on her piano.

In these songs Tiny Hazard assumes a decisively different instrumentation, but broadcasts the same collective intensity. Guitarist Ryan Weiner eschews discreet melodies for vague noises and ambient effects that he nevertheless plays with gratifying emotional resonance. His passion is obvious, in his facial expressions and body language, symptomatic of the group’s widespread zeal (see: bassist Derek Leslie as he stomped and jumped wildly throughout the set). For fuck’s sake, they’ve even got a live engineer, Anthony Jillions, who sprinkles in sound effects, like chirping birds, to accentuate the tenderness of certain moments, and drowns Spanger’s angry chanting in harrowing vocal effects to amplify the intensity of others. Drummer Ronald Stockwell exhibits the same proclivity for nuance, strumming on an unknown object — some spiraling metal contraption with a wooden ball in it — with a string bow to create a terrifyingly creaky sound effect, or smashing on a marching tribal drum to create a powerful thumping when the mood calls for it. 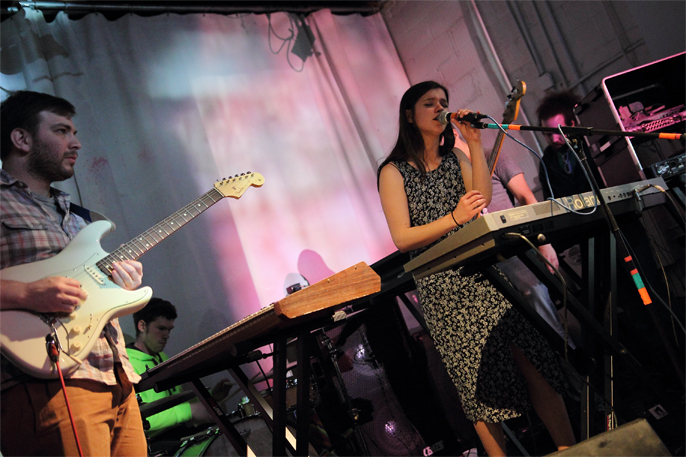 The band’s overt passion and delicious incorporation of small minutia overloads their music with so many of those “oh, fuck!” moments that are instantly recognizable when you hear something so raw, so unique, so true, and so rare. The source of such a powerful reaction to Tiny Hazard’s music is most attributable to their mastery of contradiction. Their songs are aggressive and tender. They rely on melody and they rely on ambient spacing. Spanger’s vocals are operatic and they are shy. Together, Tiny Hazard is loud but soft, fast but slow, angry but gentle. They are your enemy, but they are your friend.

I experienced a strange catharsis throughout Tiny Hazard’s set, reacting with equal intensity to the group’s two very different sounds, which was undoubtedly a byproduct of the overwhelming presence of contradiction. At so many points throughout the evening, I felt like something forbidden was hatching in my body, like something was trying to break free. Whether tender or aggressively scary, their music taps into your most secret emotional core, sending chills up your spine and inciting a knee-jerk “oh, fuck!” 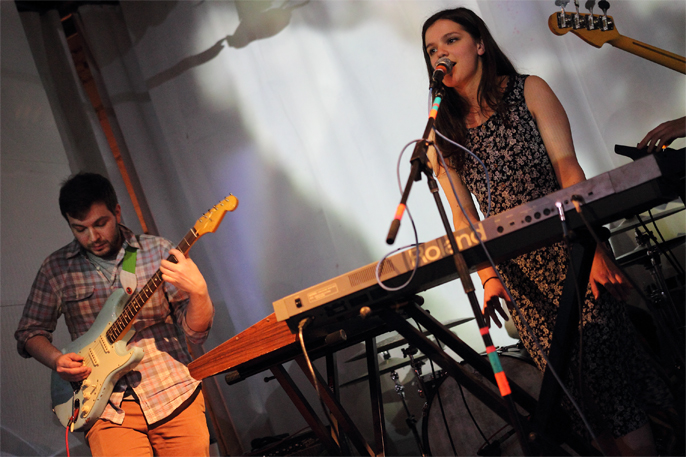 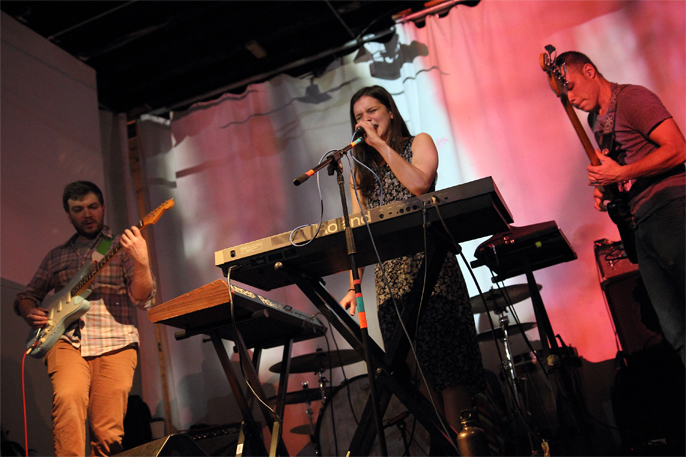 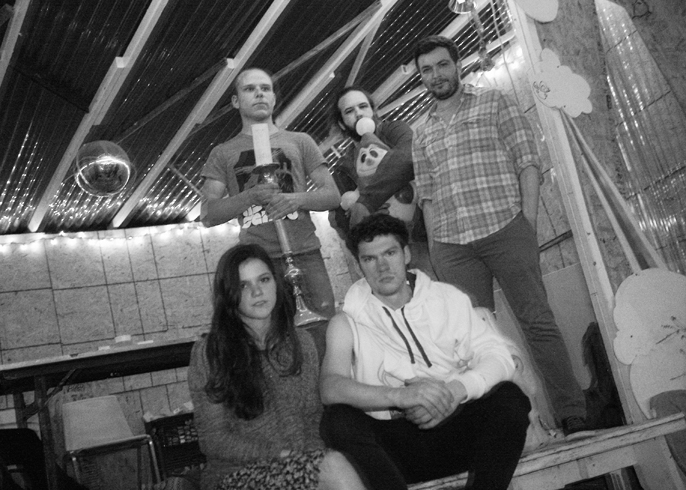