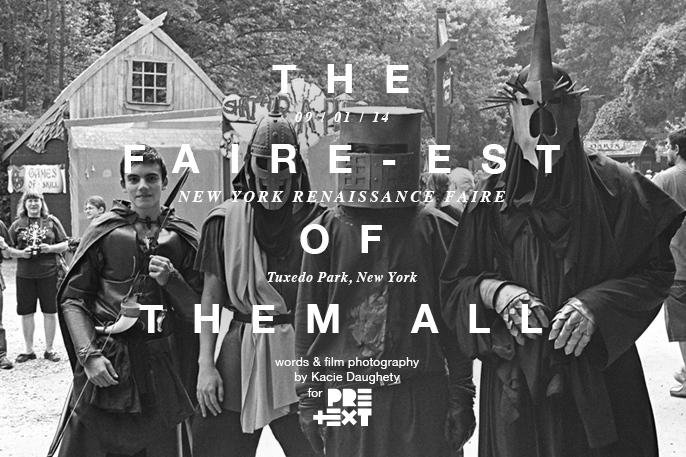 It was a hot, humid and cloudy Labor Day in Tuxedo Park, New York. The four of us languished in the hazy heat, contemplating how to entertain ourselves until we decided upon the most logical way possible: a trip to the Renaissance Faire, where an assortment of sensory delights awaited us.

Fun fact: Tuxedo Park is the origin of the tuxedo as we know it. Seriously, google it. However, this faire was no place for tuxedos; it was a place for lords and ladies, kings and queens, knights and fair maidens, wenches, minstrels, elves, fairies, wizards, and even the occasional steam punk. 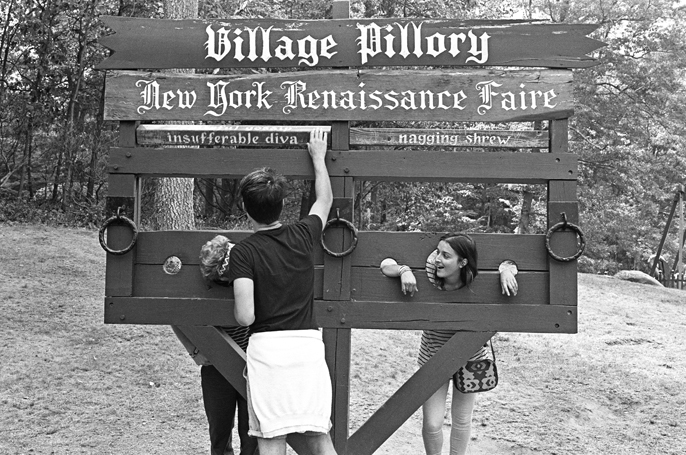 Upon entry, it seemed our fates had already been decided. The village pillory declared us insufferable divas, gutter snipes, spiteful gossips, and whey-faced loons. Our time in the stocks allowed us a quiet moment to contemplate our next move: the archery range. 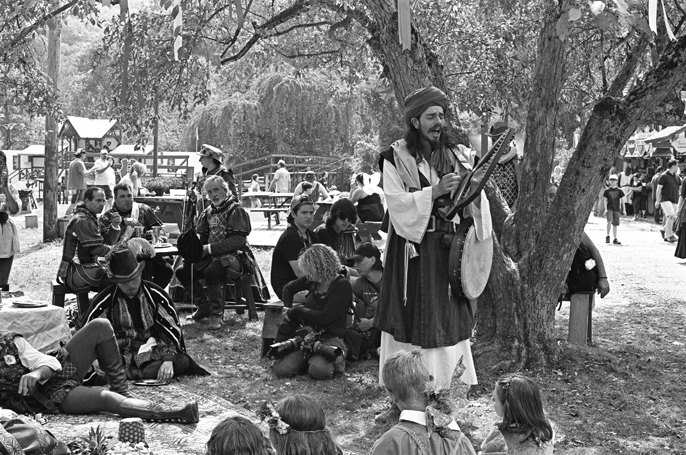 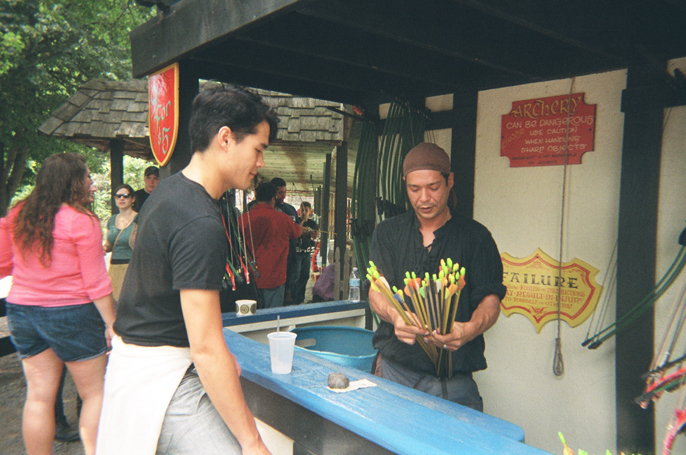 At the archery range, we tried our hand at shooting actual (i.e. sharp) arrows at wooden targets, and were all given shiny golden sticker badges that declared us “archery champions.” All of that archery left us parched, and champions gotta eat, so we moseyed over to sample the faire’s fare, which consisted mostly of turkey legs, goblets of meade (a fermented honey drink), and of course, ye olde ale. 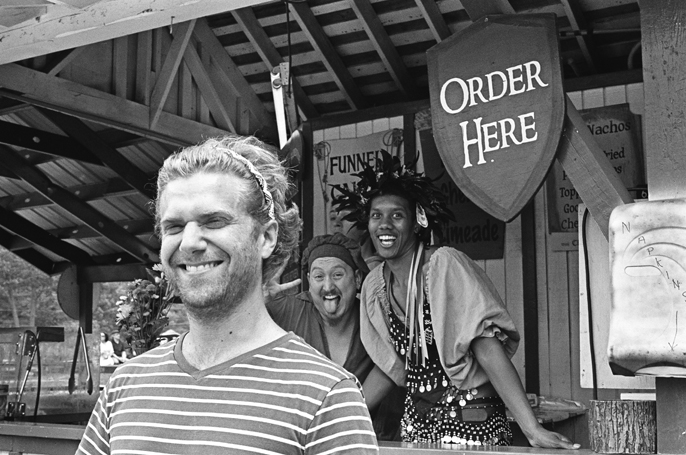 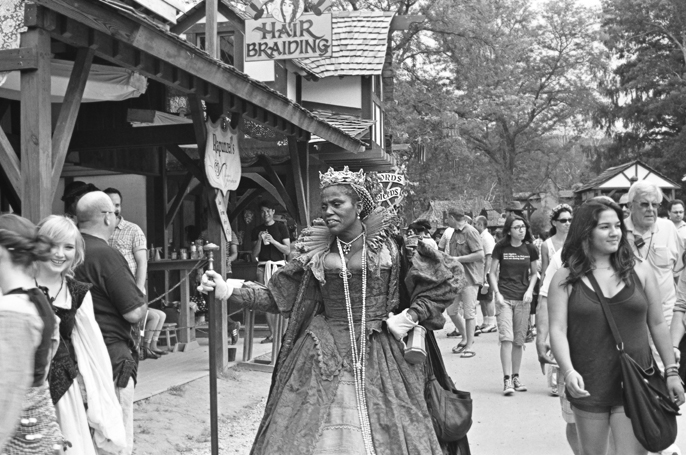 Fun fact: There are more breasts per square yard at the Ren-Faire than in any other place in the world. Have fun googling that while at work. BOOBS! 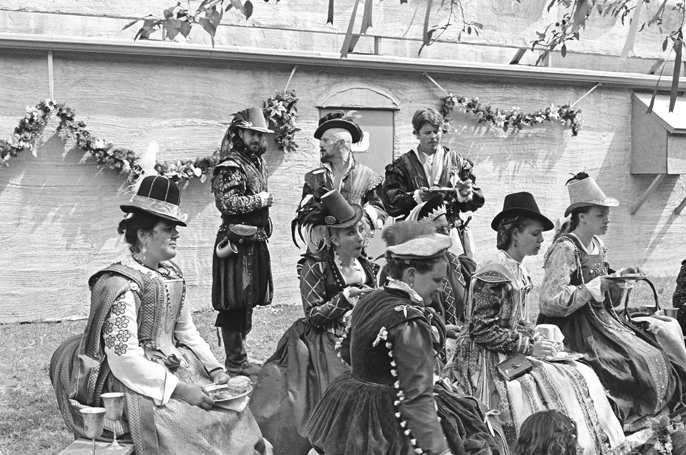 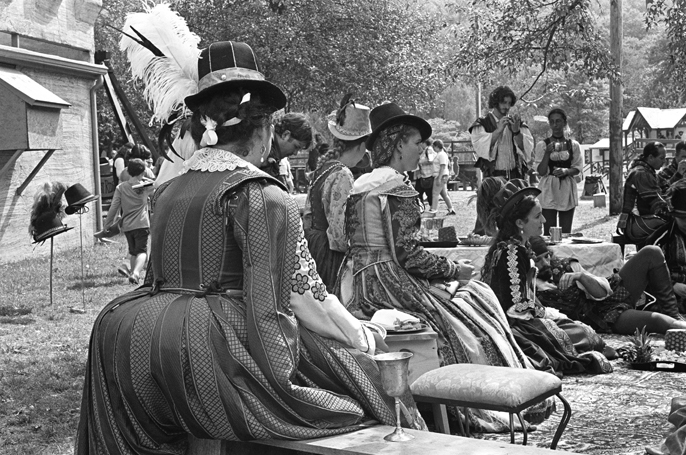 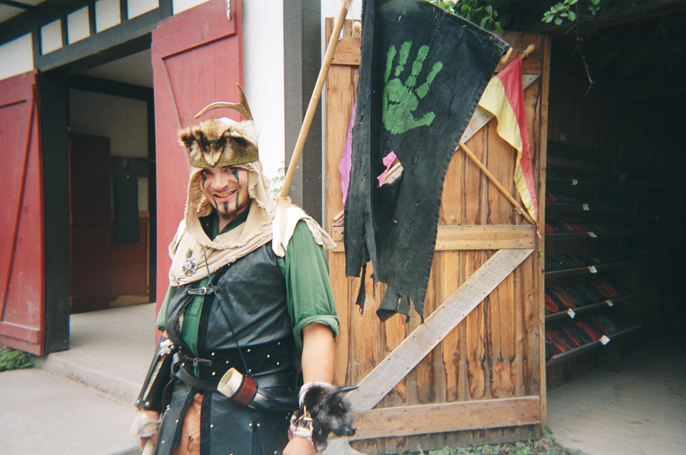 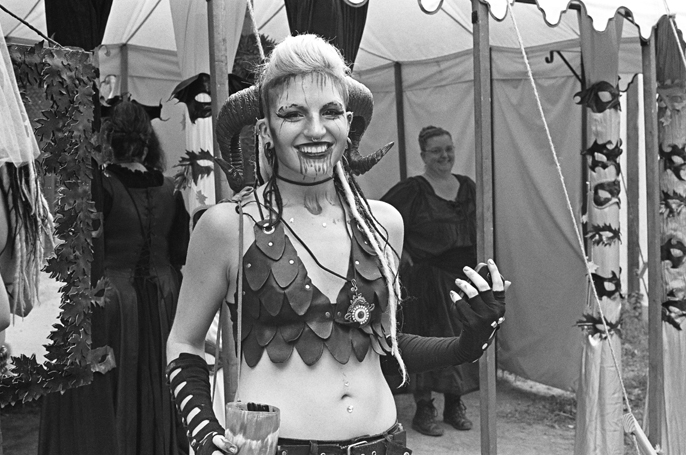 After feasting like Renaissance royalty, we made our way over to the jousting tournament, where a large crowd had gathered in the stands. Some of the spectators were theatrically costumed, others in jorts and flip flops, but all cheered enthusiastically while throwing flowers and waving pennants. A leather-clad young lady dressed as what only can be described as “Xena Warrior Princess with horns and face blood” stood beside me, and she began to boo one of the jousting knights furiously. “BOOOOO!” she shouted. “BOOOOOOOOOOO!” Noticing my confusion, she sheepishly explained, “He’s my ex-boyfriend.” 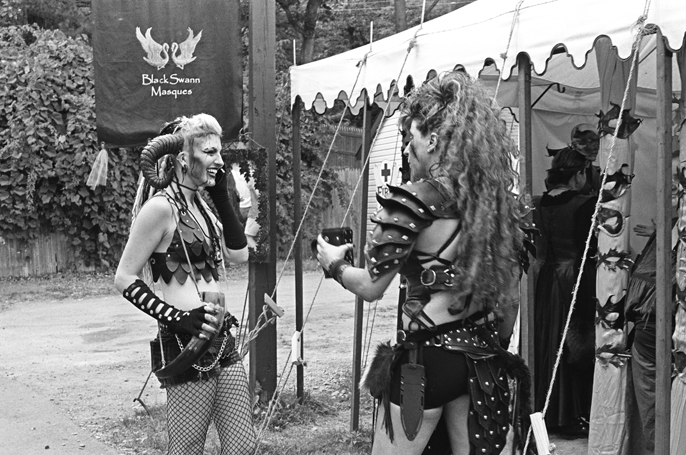 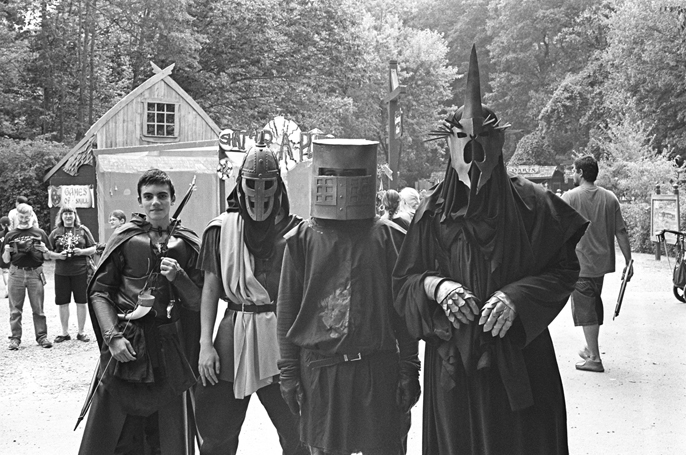 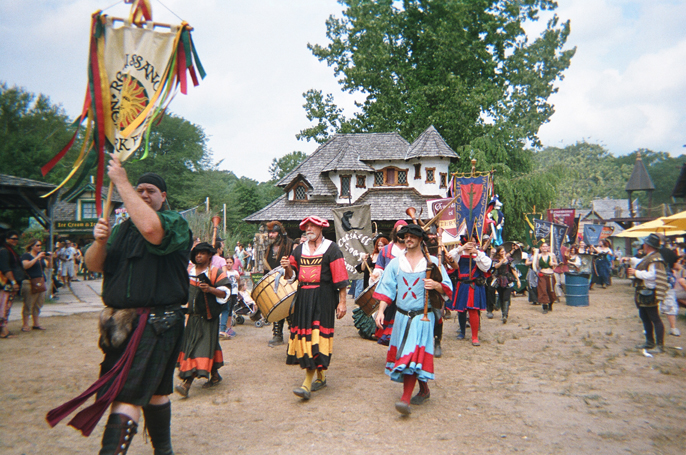 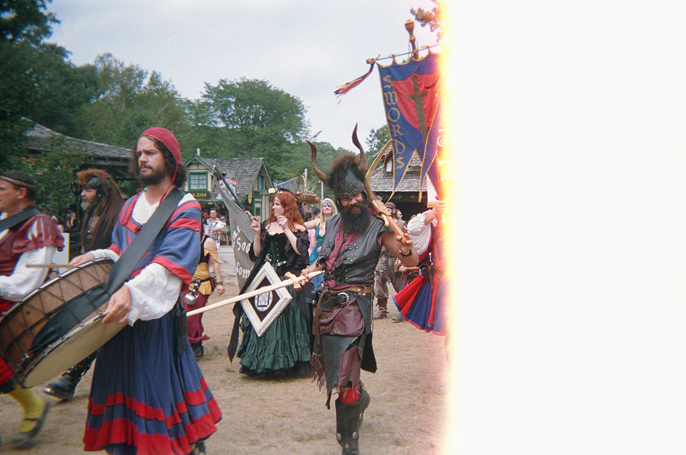 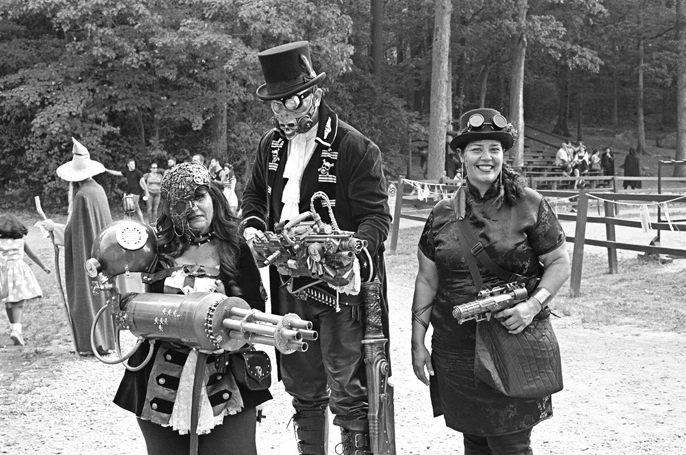 Fun fact: The New York Renaissance Festival offers a different theme each weekend. You know, on top of the regular “Renaissance” theme. This particular weekend’s theme was “Time Travel.” 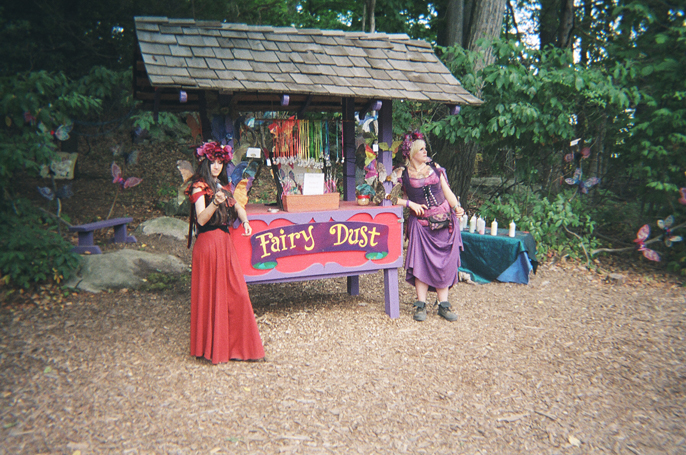 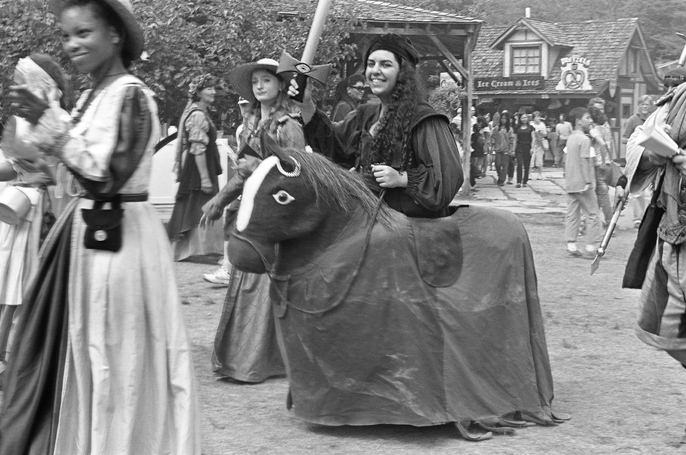 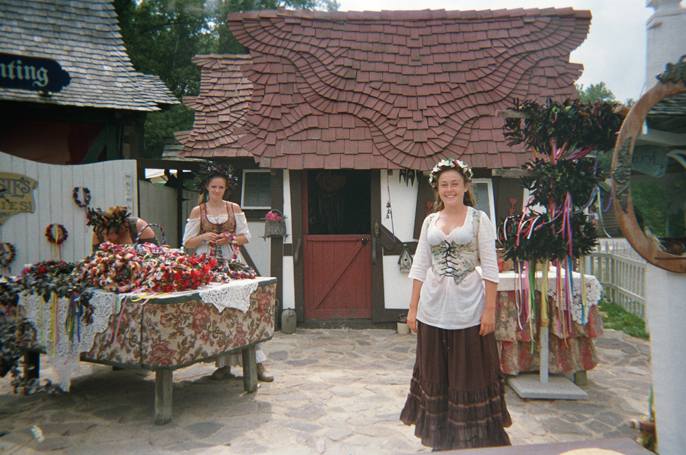 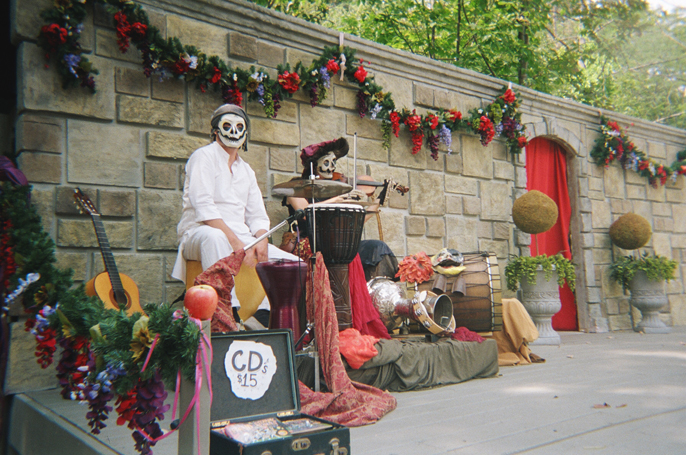 We continued to roam about the faire, purveying the wares. A fantasy photo booth drew us in with its promise of realistic Renaissance period photos, which seems dubious considering there were no cameras in the Renaissance. Rather than challenge the claim, we set about selecting outfits with the “photo wench.” The photographer offered an option to add a castle of our choosing to the photo for “some additional pence,” or $10.00. We opted for the budget-friendly velvet curtain option. After deliberating the options, we were ready to be dresssed in regal garments. The photo wench swathed us, one by one, in heavy velvet one can imagine was worn by hundreds of people before us. Finally, she set her sights upon my boyfriend with the intention to cross-dress him. “M’lady!” she exclaimed! Thou doth need thine BOOBS!” She draped some lace over him, placed some flowers on his head, and proceeded to mold two breasts under his pink velvet dress. “THINE BREASTS ART MARVELOUS!” she declared, and nudged us over to the backdrop. 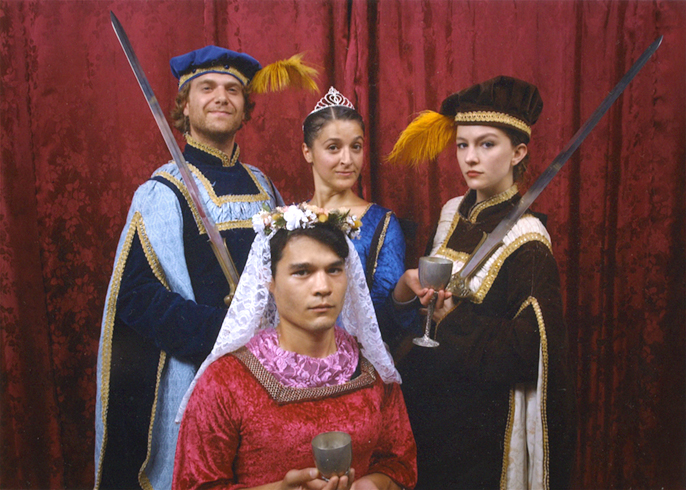 In the end, it began to rain. The faire, true to the Renaissance, did not offer umbrellas for sale, so we made our way to the car. We returned home damp, muddy, with braided fair maiden hair, bellies full of ale and the occasional stray bee in tow. Aye, it was a good day. 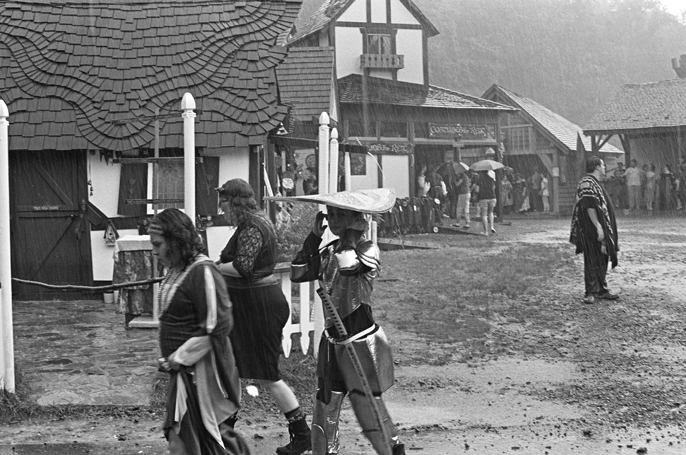 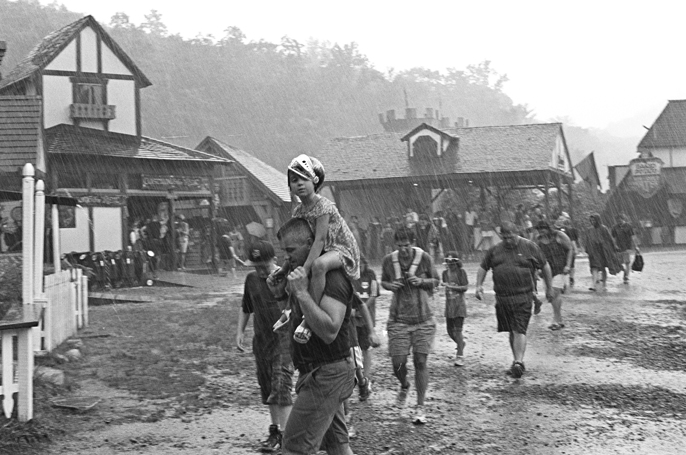