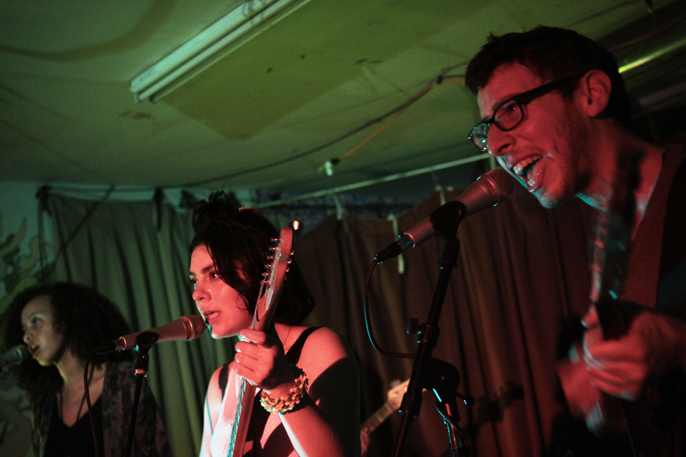 Ava Luna. Who is she? The Brooklyn band of the same name has been befuddling critics and listeners alike with an inventive and genre-transcendent sound that runs the gamut of punk, soul, funk, R&B, pop, and blues. The band themselves settles for the ethereal classification of “nervous soul.”

So intriguing is this music, though, that I’m certain it must be inspired by some muse, some mystical, sensual, mentally unstable enchantress. If I’m worth my weight in words as a critic, I believe the key lies in discovering the true identity of this Ava Luna character. Who is behind this nervous soul? I want definitive answers.

In pursuit of my quest I attended the sextet’s homecoming show at the Silent Barn in Bushwick. I was joined by a sold out crowd of family, friends, and true fans of the group. Between the setting, the band, and the familiar faces — I ran into friends who live all the way uptown in Manhattan, former employers, and tens of recognizable faces — it seemed like a Brooklynite version of “Friday Night Lights.” Only instead of football, we have Ava Luna.

I tried to gather some clues of her identity during the first few songs of the set. Boy, did I have my work cut out for me. 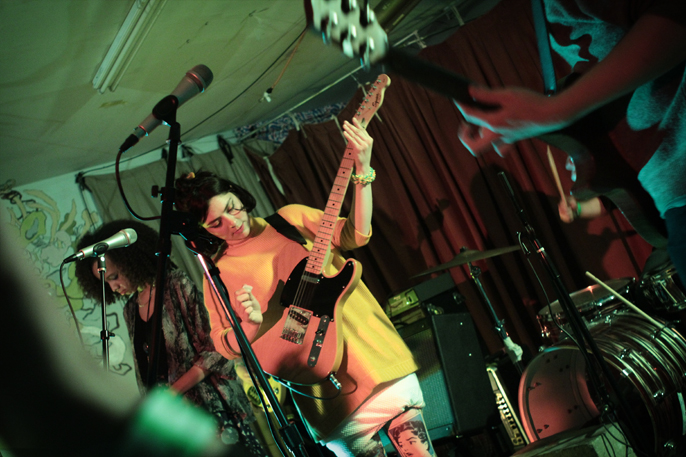 Whoever is responsible for the architecture of their musical composition has an unbelievable understanding of sound. Complementary rhythms swarmed from all sides of the stage from varying genres and instruments, all independently out of place but somehow coalescing to form an elegant mania that moved with the precision of an expertly crafted machine. Single melodies were delicate harmonies between guitar, bass, and keyboard, and the larger structure of songs varied wildly — a little funk here, a little dissonance there, some pauses, some pullbacks, some ups and some downs. Do you like catchy hooks? Well, here’s some reverby screams to go with that.

This singularly inventive composition is made more impressive considering that the predominant harmonies, chord progressions, and melodies are not especially unique. Instead, these performers instill their minimalistic instrumentation with intangible emotion and a timbre that waivers between desperately groovy and gravely desperate. Frontman Carlos Hernandez croons in a shaky, sultry falsetto over extremely rhythmic guitar melodies that occasionally erupted into fits of noise or disturbing solos. Other times he’d harmonize with his guitar using timeless chord changes that recall the golden highway harmonies of classic rock, supremely complemented by the smooth R&B licks of keyboardist Felicia Douglass. Becca Kaufmann chipped in with a wiry, strung out second guitar using repetition to great effect. She’d either bring them funkily to life or eerily ring ‘em out in a demonic cadence. Meanwhile, drummer Julian Fader brought the basic snare/bass/high-hat meat and potatoes, but played them aggressively loud creating a jarring effect.

“Nervous soul…” I thought to myself, stroking my beard. “Yess perhaps this is true…” Still, the question remains: who does the soul belong to?! Songwriting credits are given not to an individual band member but to “Ava Luna.” Until the fourth song, Hernandez served maestro duties, so maybe Ava Luna is his female alter ego? He does occasionally sing from a female perspective. So, there you have it. Mystery solved. 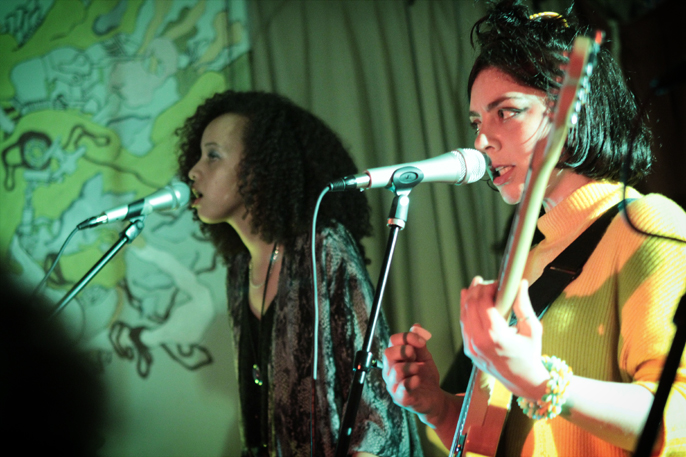 And then the band played “Sears Roebuck M&Ms,” an exquisite track off their new LP Electric Balloon. And Becca Kaufmann started to sing.

Already a charismatic on-stage presence without singing a single note, I was certain I must’ve found the single entity known as Ava Luna. Not only is she a more gender-appropriate pick than Hernandez, but clad in Cleopatra eyeliner and Debbie Harry digs she also has all the mysterious charisma I’d associate with an Ava Luna. Taking a page from Tina Waymouth in the Tom Tom Club hit “Genius of Love,” Kaufmann started to delicately pseudorap with animated charm: Everybody says we’re talkiiiin’, everybody says we’re talkin… about the new sweet thang! over delectably plucked funky guitar and bass and she’d coo and holler and shout in suggestive gibberish and… oh dear… excuse me… I need to catch my breath. I don’t know what the “new sweet thing” is, buuuut I think I like it. 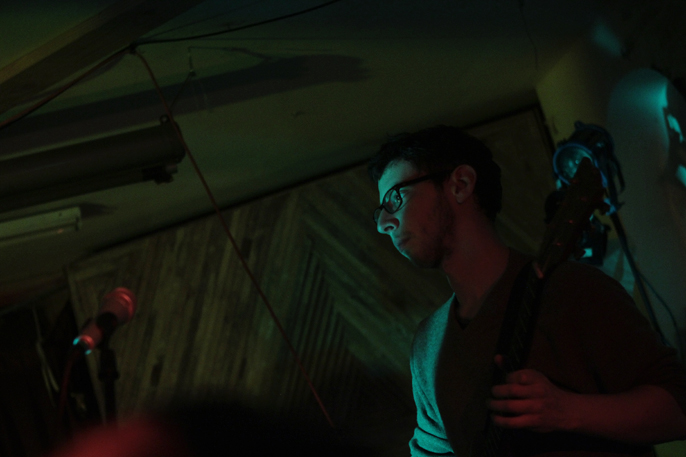 But, what’s this? Hernandez comes roaring back, warbling sensuously in “Crown:” yooooouuuuu’re just a little child. and IIIIIIIII need a man! Shit, wait, so Luna is Hernandez?! But then Douglass took over vocal duties for an old school slowjam and tore down the house. And now they’re all harmonizing at once? AH FUCK. I give up. 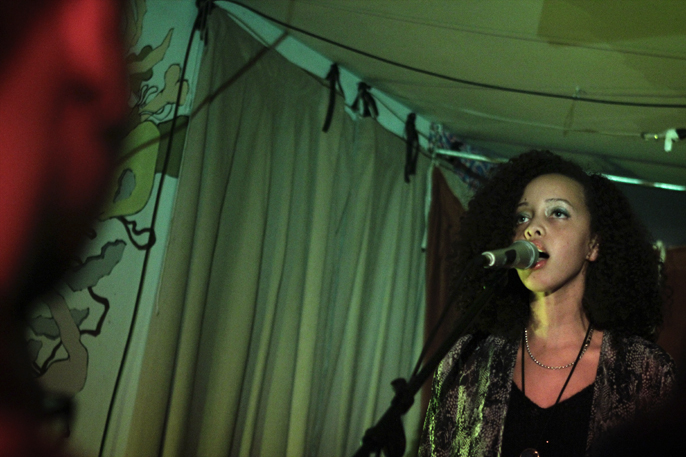 The final few songs of the set did not waiver in keeping with Ava Luna’s badassery, whoever she is. Whenever the band wasn’t playing, you could hear some sort of passionate exclamation from the crowd in response to just how otherworldly this music is, whether it be someone making an aside to their friend “this is seriously my favorite song!”, or a knee-jerk “FUCK!” response to hits so funky they answer James Brown’s famous pleas from “The Payback” — Gonna get some hits-ah! I need those hits-ah!

The band’s final respite was met with an astonished silence before one heroic audience member yelled “IS THAT HOW YOU ASK FOR AN ENCORE? JUST FUCKING HOPE THEY COME BACK ONSTAGE?” The crowd exploded in cheers and Ava Luna obliged. 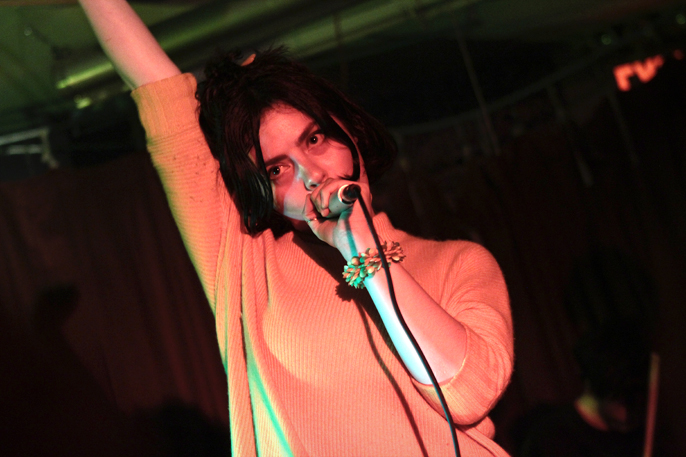 I’m still no closer to finding out the true identity of this mysterious woman, but I will continue my search. I was in such a damn state of euphoria by the time the show closed, I almost spent more than half of the $23 I have to survive on until this weekend on a new Ava Luna vinyl. Even since I started writing this review, I’ve purchased four of their songs online. And while I didn’t conclude my investigation, the news isn’t all bad. My next paycheck comes on Friday and I won’t be letting up any time soon.