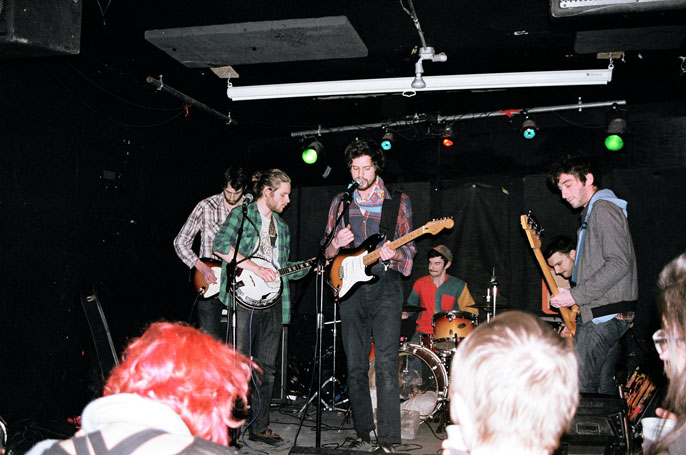 The second Saturday of March was one of the first days in the always anticipated uprising of balmy, concert-going weather. To ring in the new swell of endorphins that comes with this time of year, two local groups, The Tablets and The Adventures of the Silver Spaceman, played back to back at the Greenpoint party-down favorite venue, Bar Matchless. Both groups carry heavy auras of the coveted disease that infects Brooklyn-based musicians into their multifaceted spirals of work ethic, born from an environment in which the ulterior pressure is always there to keep up with the other thousand bands in this borough. However, The Tablets and The Adventures of the Silver Spaceman, seem to keep up (and ahead) of the curve without trying, and watching them live you can tell that they dig it tremendously. Most members of the bands can be recognized as having been key or backing members of numerous other Brooklyn groups, some defunct, some still together. Though their faces might be known to local-music lovers and soundmen around here, the sounds I heard were new and on par with the two groups respective habits of creative fervor–each is putting out new music soon. 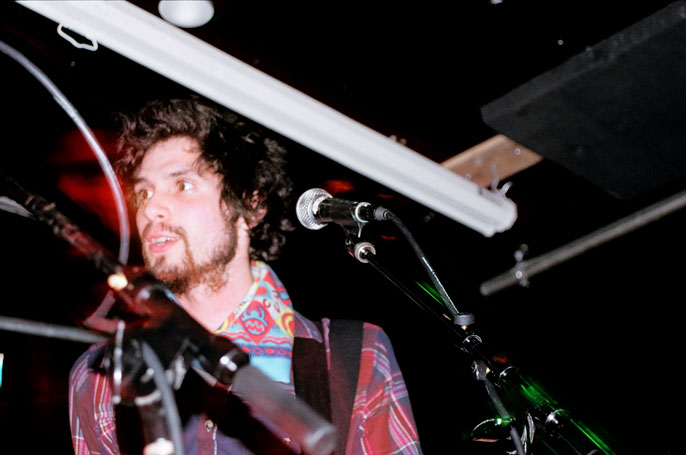 The Adventures of the Silver Spaceman is the brainchild of Zachary James Ellis, also a member of Brooklyn’s Haybaby and the currently dormant Steer. The Adventures Of The Silver Spaceman was the second band of four that night, and regardless of having an opening slot, and the cordoned-off layout of Matchless’ venue area (the room used to be the garage when Matchless was a vintage motorcycle shop), they drew a good crowd. Looking over those waiting while the newly vamped up The Adventures Of The Silver Spaceman set up, there were many smiling faces. At least half the crowd was girls–always a good sign for an entirely male band. (Kim Gordon always said that if half your fans weren’t girls, you were doing something wrong.) 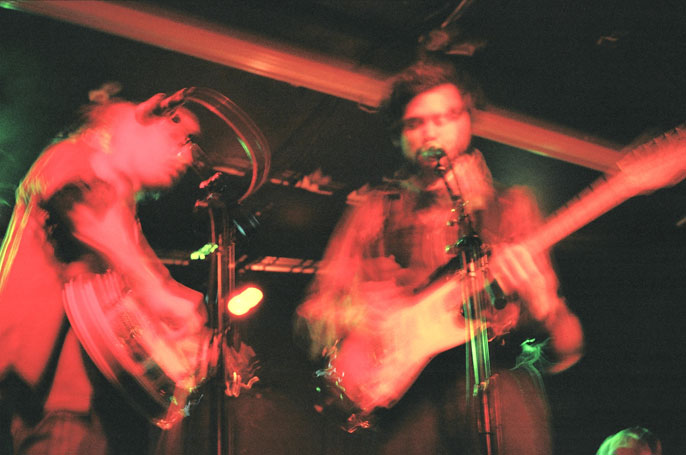 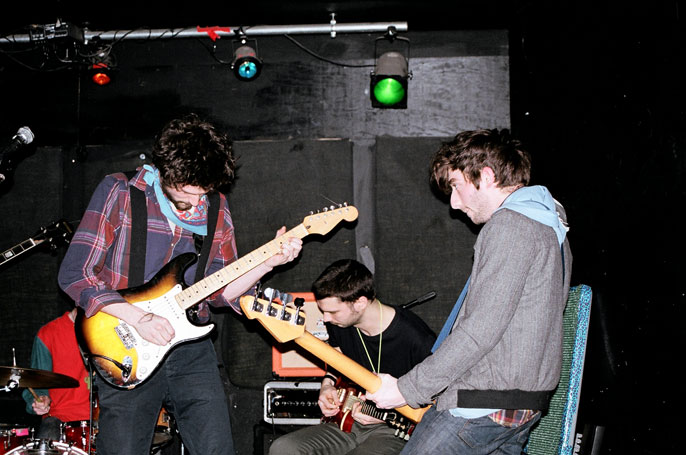 I refer to Silver Spaceman as ‘vamped up’ because since the last time I saw Zach play, the space vessel had added a few silvery strummers. My expectation was to see Zach by himself as I’d seen him before as the Spaceman; a solo troubadour, finger-picking an acoustic with some layered backing samples he controlled with foot pedals, plucking through his daydream of a Southern bayou set in space on LSD. Instead what I, and all attending, got was a six-piece band, and not a drop of it wasted. Zach was center-stage, in overalls and bandana, like the man who fell to earth trying to blend in with America so he can play his tunes incognito, with electric guitar. Two more guitarists,  Chris Abbadessa sitting half the time playing slide on his lap and Dave Susman playing lead licks, beefed things up considerably. The most interesting addition to the newly electrified lineup was a banjo (Nathan Oglesby), perhaps to instill the subtle twinge of folk that you need when your personae is an admitted storyteller. The bass guitar was taken up by Sam Yield (a bandmate of Zach’s in the slack-gaze trio Haybaby, of which Zach is the drummer) who would capably propel some song parts with simple root notes, only to surprise by flourishing accents and melody lines that only certain knowing, structure savvy bass players can write. The drums (which always make or break when you go from solo to group) were spot on played by Ryan Martin; good time, varied styles, and heavy hits whenever Spaceman cranked it, as they did often. 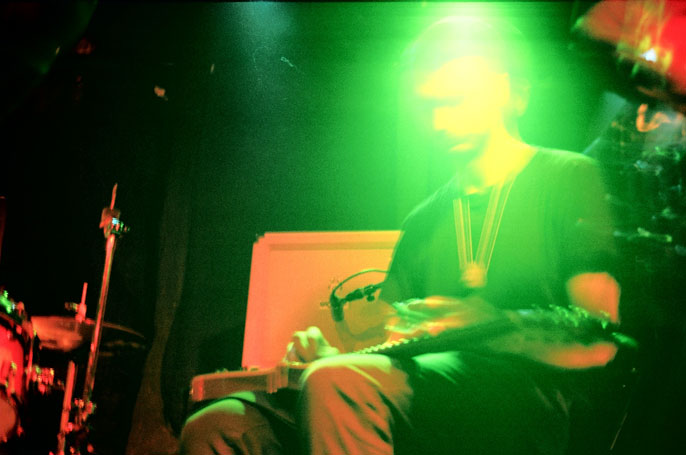 The solo Spaceman had Zach right at home in my mind as an early-60s Greenwich Village/ Cafe Wha? wonderful weirdo. But anyone who’s seen him hit his crash symbols in Haybaby or grind his guitar’s neck into his amplifier during a noise surge from Steer knows that the seed of rock is always within him, and the change to a group is intuitive to it. The first songs I found a good rhythm in. They were concise, quick tempo, and churned along. I got a feel of Crocodiles era Echo and the Bunnymen, or R.E.M. before they lost their punk and their hair. Things got exponentially more eclectic as the set went on. The first–and not last–time they went into 70s hard-rock Deep Purple mode was what really changed my head from just rocking to good music to sweepingly nodding in appreciation for the interesting changes they were laying down. While oftentimes silly and trying not to take woe and life too seriously, some songs did have touches of real emotion and angst in their lyrics and melody, as in “The Ill Poet” which seems to exhibit a sad frustration in its collective elements. The set was matched evenly with moments of the songwriter’s inherent levity, culminating in a song called “Free Jazz” that I hope to hear on The Adventures of the Silver Spaceman’s upcoming album Sun Songs. “Free Jazz” was a highly danceable nod to Talking Heads’ “Remain in Light,” that ended with a “Rapture” like rap when the banjo player let his axe swing down to take up the mic with both hands and put some rhyme in the air. It had me laughing with them. 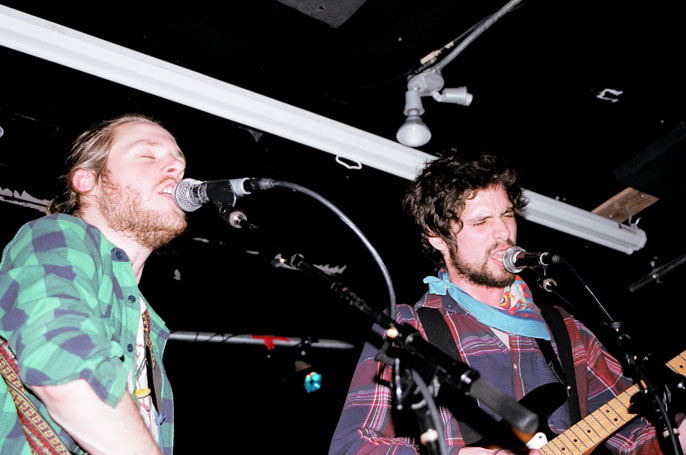 There aren’t many groups around that really have the feel of The Adventures of the Silver Spaceman. They seem to have found their sound by accident, because although Zach Ellis writes and arranges the songs and music, I believe that the individual musicians have near autonomy to write their own parts, making the current band a collection of good-natured friends bringing good ideas together to form a must-see trip into the pleasures of reflective rock n’ roll space-travel. Check out Spaceman’s three existing releases and do support their Pledge Music campaign (that launches next week with a promotional video) to help get the new The Adventures of the Silver Spaceman album Sun Songs off the ground either by donating or listening/ sharing/ downloading (for free!) their newest track “Zierra.”

The Tablets play a brand of what could most easily be called an homage to 60s pop, but they go about it in an appealingly weird, markedly lo-fi way. While they set up I stepped out for a moment and came back to find the stage aglow. The shadows of Gooby Herms (bass), Brenden Beu (guitar, co-producer of Tablets’ records), and Liz Godoy Nieto (songwriter, vocals, organ) were being thrown all over the backdrop as they finished their set-up. The bodies of the audience, with new people percolating in, obscured the source of the stark white light, coming from an old projector on the floor. For awhile now Liz’s sister Melissa Nieto has been accompanying The Tablets with unique live projections, and she knelt that night over the old machine sorting through colored gels, patterns, and what looked like doilies. 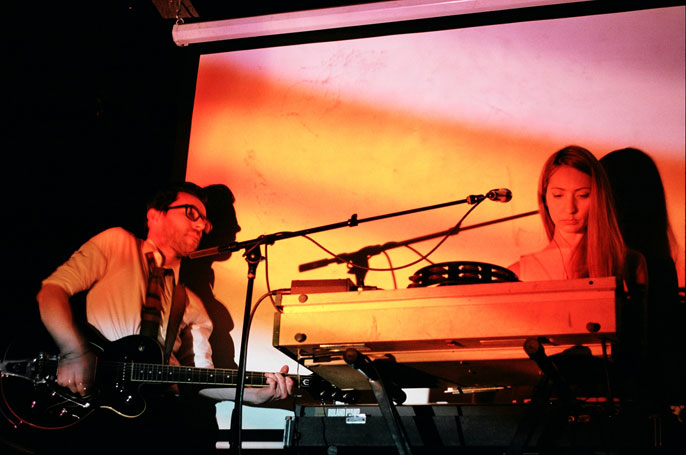 Liz and Brenden have been collaborating on music in Brooklyn since 2005, moving to town together with their successful joint project The Fearsome Sparrow. The companionship of the two give them a noticeable creative comfort which must help with such well-arranged songs, and Brenden’s trade experience as a producer/ sound engineer doesn’t hurt either. Soon the house music faded out and after a few moments of silence, was replaced with The Tablets’ token broken toy drum machine. The simple, aggressive beats got toes tapping before anyone even started playing–some people just respond to straight rhythm. When the band kicked in, whatever disco-goth or lazer-trance music people unfamiliar with the band might have been expecting from beats so dirty was quickly put to bed. 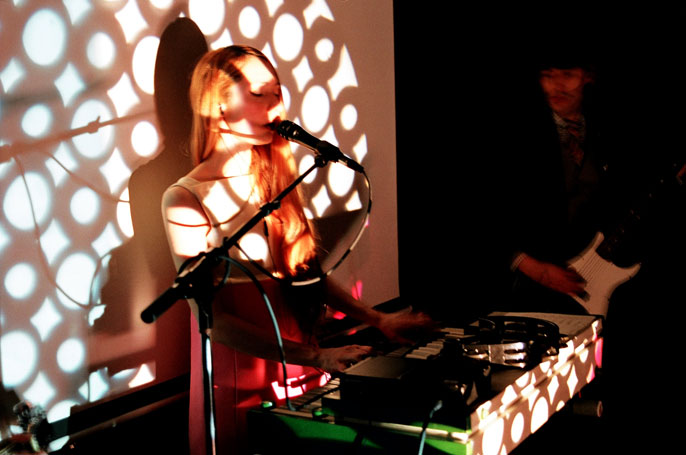 The band has admitted blending styles that don’t typically go together, but although the merge of fuzz and honey might sound odd to the clubby Top-40 set, to music nerds it’s all too clear where the evolution of influences line up, from girl group pop to shoegaze, like rings in a tree. However, The Tablets, represent this blend more bravely than any of their predecessors. The key is how cotton and dirt-drenched the guitars and backing parts can be while still keeping the pop structure. The organ and all the atmospherics spread around from the distortion creating a wonderful cathedral-like presence in The Tablets set. To me it gave it a religious feel–almost a religion of the 60s. Like three kids discovered Phil Spector after World War III and decided to worship him by recreating his music with broken radio and synthesizer parts they found in junkyards. 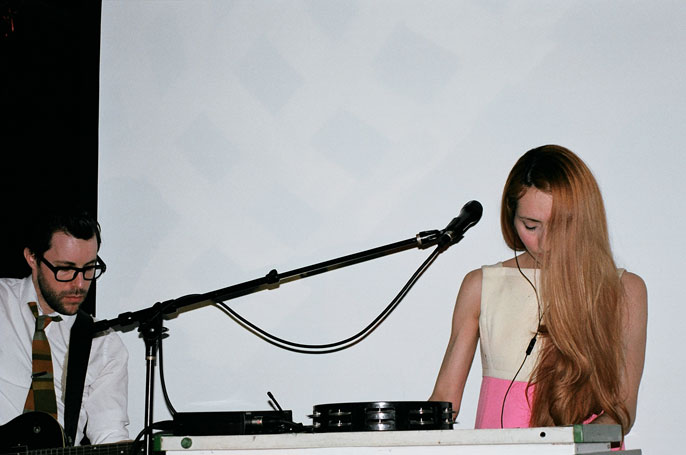 The girl group nod couldn’t be complete without a voice as suited to it as Liz’s. She sings her ivory bell notes so well with her prerecorded harmony parts that the long ones sound like dial tones. Listeners are tempted to close their eyes to Brenden’s entrancing slowed-down Link Wray and occasional 8-bit videogame explosion guitar washes, but they might get bumped into by kids hopping around to the ever-present dancing beats and the clean-pulsing, dependable bass. It’s also a good idea to keep your eyes open for the psychedelic projections; not to mention Liz’s hair, a long bright whip of red, which visually is pretty much a fourth member of the band. The Tablets have one album out and are recording an EP of new material to be released soon.

The Adventures of the Silver Spaceman at Bar Matchless March 8th, 2014 photographed by Gustavo Ponce 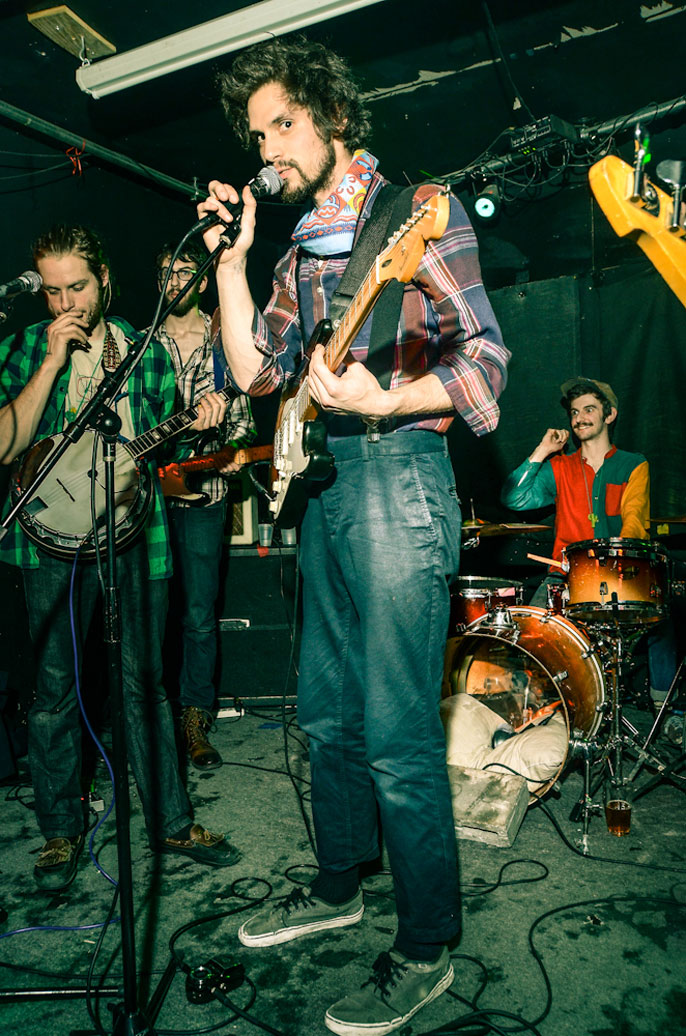 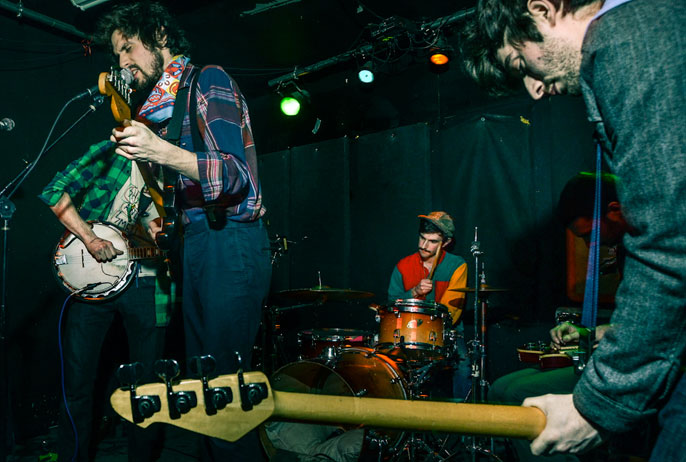 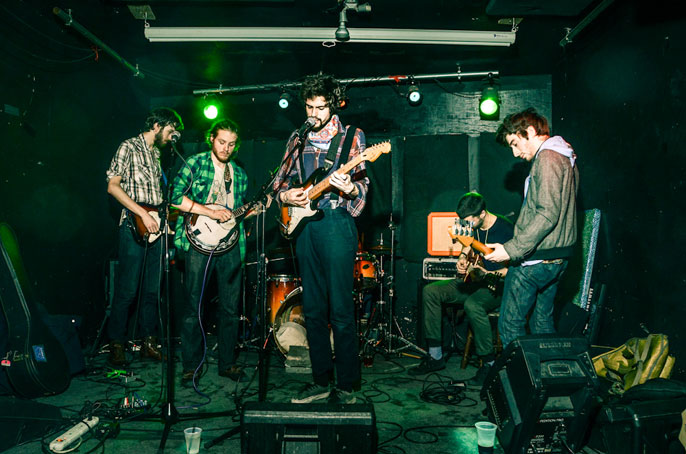 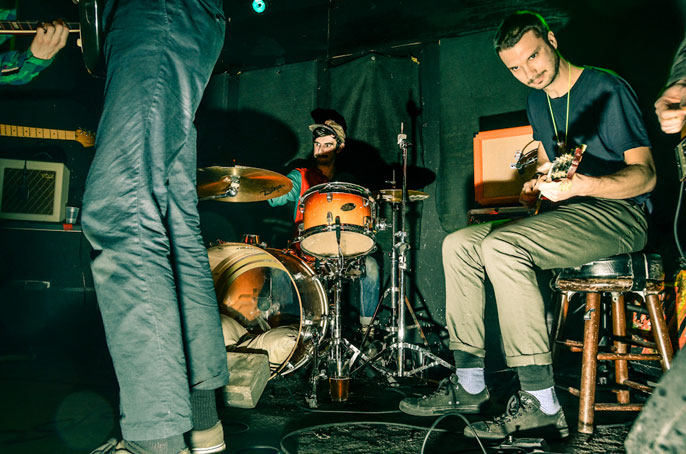 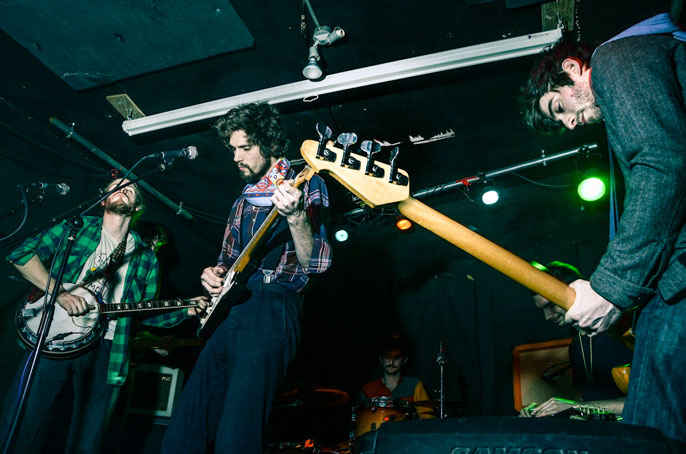 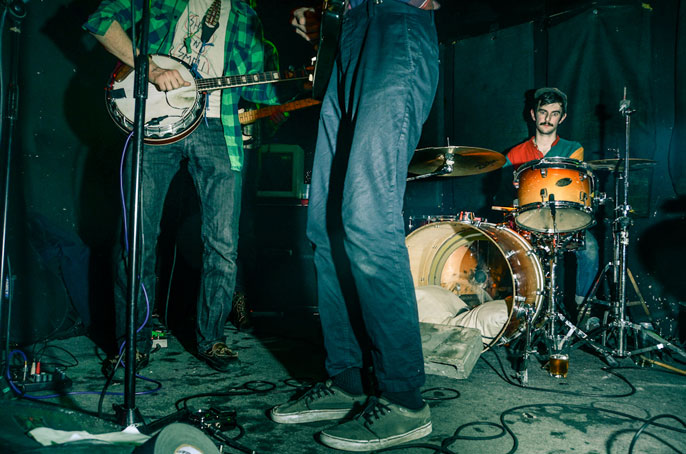 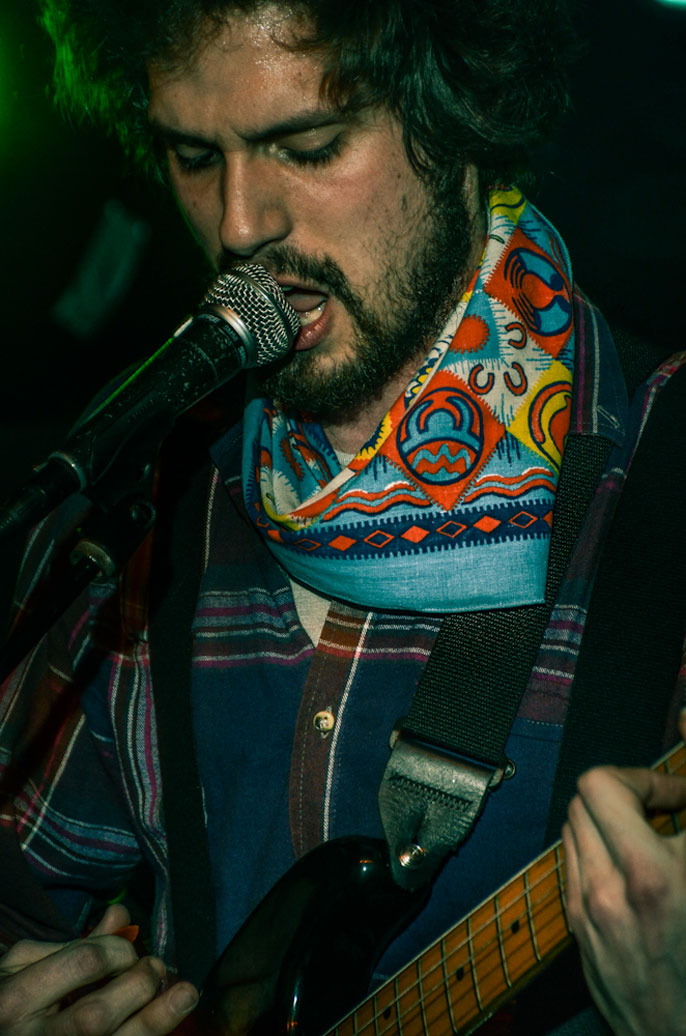 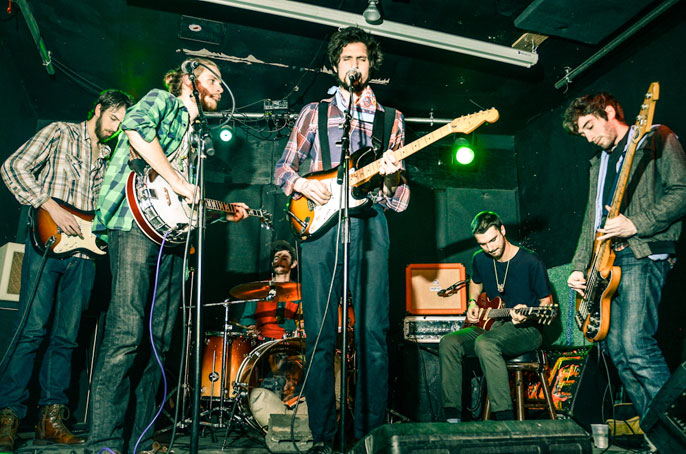 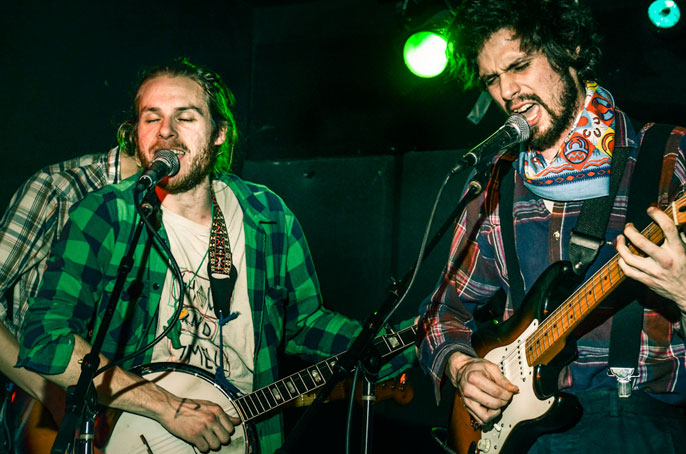 fuzz-pop , psych-folk , The Adventures Of The Silver Spaceman , The Tablets