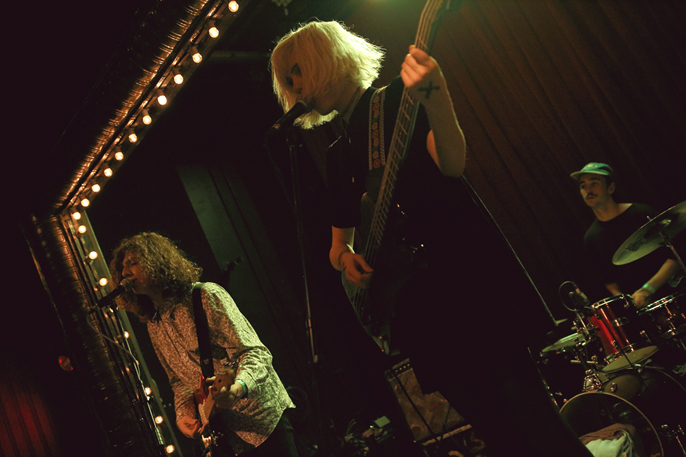 If you’ve been waiting for a defining moment in modern rock and roll, someone to bring it up to speed with the current “indie” ethos without meddling with its stripped down power, look no further. Sunflower Bean has arrived. If their recent releases and scarily entrancing set at Union Pool last Sunday are any indicators of what’s to come, they are rock icons in the making. Armed with an infectiously charming coolkid stage presence and an eclectic buffet of low-fi influences that spans the past five decades as well as the current one, the group has a striking sound that bridges the gritty musicianship of the old school and the sonic texture oriented, forward-looking-but-retro new school.

The trademark staples of the power trio’s sonic stylings were established most powerfully in their opening number, “Creation Myth,” and later again, in the delightfully cerebral “2013.” Both songs featured tag team vocals from guitarist Nick Kivlen, whose strained vox were filled with drony, emotive personality, and from bassist Julia Cumming, whose breathy, detached, and slightly eerie voice calls to minds such 60s sirens as Nico and Francoise Hardy. There were uptempo, desert rock drums from Jacob Faber, which primarily consisted of a controlled, chaotic beating of floor tom and crash cymbal. There was light funk from Cumming’s simple but charming basslines; and there was a wicked mastery of all things guitar–melody composition, shredding chops, and pedalwork–from Kivlen, who borrows heavily from the infectious summertime riffs of surf rock and the twangy blue effects of shoegaze.

And a whoooole lot of reverb. On everything. Reverb, reverb, reverb. Gootttta love the reverb. 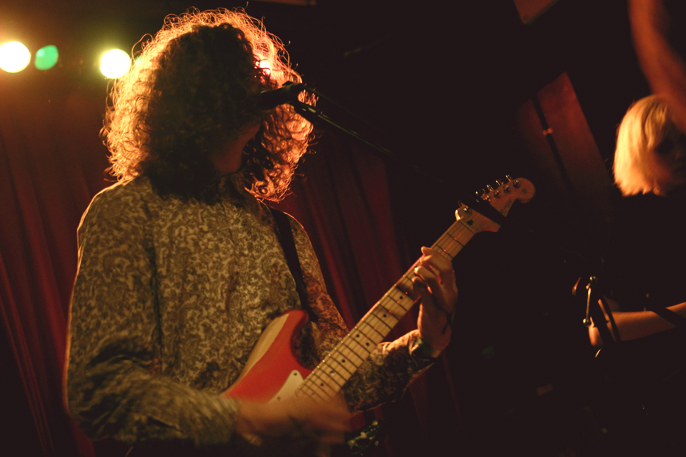 These moving pieces might sound messy on paper, but they are remarkably succinct in Sunflower Bean’s music, coalescing to form a tight gothic psychedelia. Even more remarkable than this cohesion, though, is that the band was able to employ wildly varying timbres and song structures while staying within the confines of their own idiosyncrasies. They played to a wide spectrum of moods, from sludgy to fuzzy to melancholy to ethereal to psychotic, and on several occasions, experimented with a variety of tempos within the same song.

Their diversity was sewn together by clever melodies, which, and I cannot stress this enough, were intelligently crafted but never to the point of getting in the way of rocking out. With the wealth of experimental bands in the NYC mix, it was very refreshing to hear a band that pulls from a similar well of influences, but whose main goal is to create cut and dry rock ’n’ roll music. Laced with reverb. On everything. Reverb, reverb, reverb. Gootttta love the reverb. 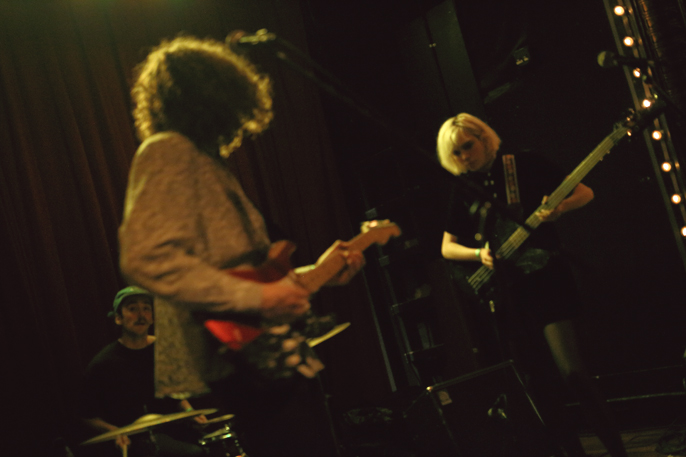 “Tame Impala,” for instance, utilizes the same basic elements as the songs that came before it, but it’s a ball breaking, mother fucking, dirty backstabbing rock epic, featuring wild screaming vocals from Cumming and Kivlen, and virtuoso solos from the latter. In addition to its ballsiness, the song contained a slew of highly intricate features: a long, slow, funky break down; a series of delicately crafted and distinct melodies; elaborate guitar effects; and pronounced shifts in pacing. The song was so fucking good that it forced me into a.) asking everyone around me if they knew–”HEY! DO YOU KNOW WHAT THE NAME OF THIS SONG IS?!” b.) letting my hair down out of a bun so I could watch it shake shake shake as I bang bang banged my head, and c.) completely reconceptualizing my understanding of the band’s image and sound.

Having the capacity to incorporate so many different sounds in one song and changing them up again from song to song–and not getting lost in the process–requires very strong, distinct personality. Indeed, the band’s striking but subtle poise is what perhaps impressed me most about the young trio. Cumming and Kivlen are like the same side of a posterchild coolkid coin. They share an understated vintage style, both are tall, lanky, and imposing in stature, and both project their charmingly distant musical personalities with an unassuming demeanor. Meanwhile, the mustachioed Faber eagerly backs them with bravado, a backwards hat, and a ponytail, punishing his poor drum kit until his high hat nearly gave out. In fact, it almost did amidst their 8-minute long closing jam.

The most enduring acts in rock, past and present, have achieved their iconic status in one of two major ways. The first is by creating an entirely new sonic world that leaves its imprint on your brain by virtue of its wild innovation. The Talking Heads, for instance, fusing worlds of art rock and old school funk for the first time. The second path relies not so much on a dramatically new musical creation, but rather, a musically transmittable personality that is alone substance enough to reinvigorate a more conventional source material. Mac DeMarco, for instance, channeling a hipster-goofball Jerry Garcia. 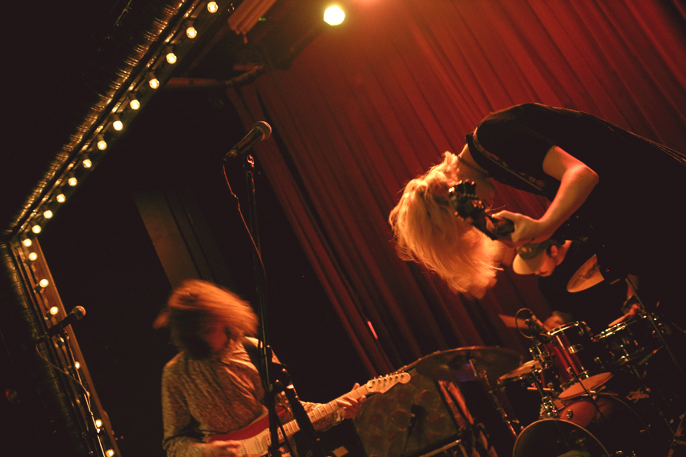 Sunflower Bean has the potential to follow both of these paths simultaneously. As I watched them all jam, the trio seemed engulfed in each other’s energy, a kind of perfect unawareness that signaled not ignorance, but a pure desire to create only the music they intended on creating and playing it the way they wanted it to be played. Such a rare combination of authenticity and passion has led to a very unique sound, which has led to a killer live show. It is a signal of the immense potential of this still very new band, that still has no official release to their name. It is a power that, when properly harnessed, cannot be drowned out. Not even by all the reverb in the world. 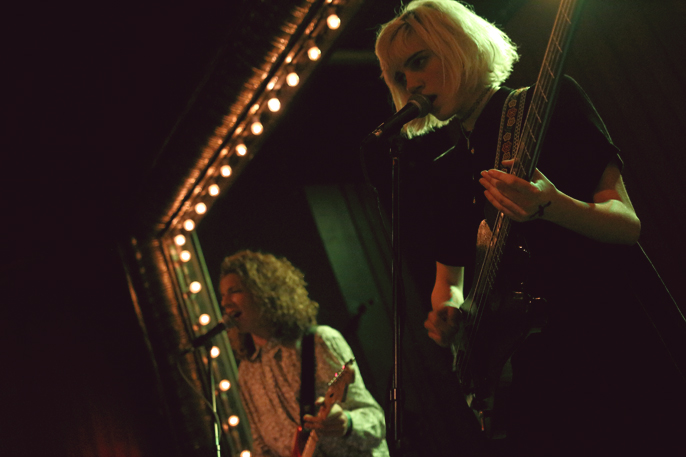