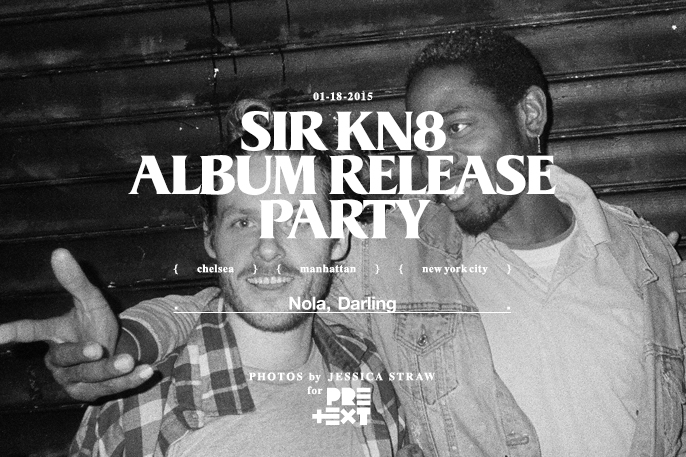 I love—mind you, I do not use the L word lightly—love that I can sincerely say that the positive vibes were flowing freely amidst the Sunday night party-goers at Nola, Darling on January 18th. The energy made for an ideal setting to host the release of Sir KN8’s album and book, Quantum Electro Flavor Dynamics (designed by Alicia Papanek, published by Papercut Press). The evening began organically and quickly developed into an interactive affair. The relaxed aura was due in part to the poetry reading that was curated by Papercut Press. The poets read to a warm and receptive audience who listened from their cozy seats on the floor. The authors included Morgan Parker, Tommy Pico, Natalie Eilbert, Paul Legault & Christina Pérez Díaz, and each of their selections exude a candor that balanced skillfully between funny and serious.

The bands joining Sir KN8 in celebration included Prince Harvey, Slop Wop, XHOSA, NAH, 0o0, and Hadassah. They ranged in sound from poetic rap to experimental techno, a characteristic that would be expected from an event co-curated by SHOW and SMELL Recordings and Slackgaze. Sir Kn8’s set was impressive, to say the least. Having seen him before, I wasn’t surprised to find the audience swaying in time to the 90s-throwback beats, mirroring Sir Kn8’s addictive motions. He often gestured his free hand in a circular manner as if to spin the words midair after they left his lips. His lyrics are not only poetic, but informative to become interactive. Sir KN8’s joyful examination of linguistics, philosophy and metaphysics taps into a magic making it catnip for the listener’s imagination.* 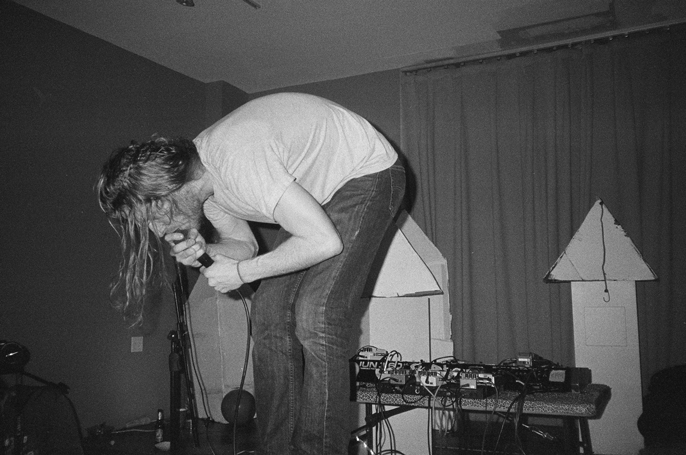 *On our way home, my friend and I recounted the evening’s notable moments. It was a bit like a conversation two people might have right after seeing a movie in the theater. “Did you see the guy with the fancy bag?” I asked my friend.

“No,” gaped my friend sarcastically, teasing the ridiculousness of my having asked a question with such an obvious answer. I was referring to the statuesque figure who appeared some time during Slop Wop’s set. The guy appeared from out of nowhere and stood in the front of the audience, motionless and transfixed. Audio waves were calmly filling the room until suddenly they were bubbling over the edge. This activated the audience into dance, or at least the first three row. Fancy Bag then slowly reanimated, moving his body as if to awake from a long, deep slumber. He began stretching, rotating through a few poses before landing on one resembling the Warrior Pose–his arms extended far from his sides like wings and his chin angled to face Slop Wop. It looked as if he was channeling all his energy into the performer. When the music began to fade and the audience could be heard, he laid down with his back on the ground, remaining there until… 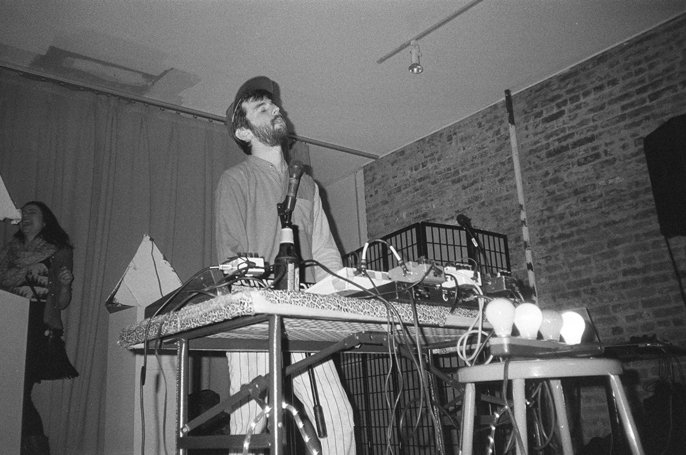 “I never saw him leave,” I realized out loud. “Did you?” My friend hadn’t either. Bewildered and a little concerned, I wondered who this magnetic individual was. His attire looked so new wave that it was timeless. Fashion trends being cyclical, he had somehow accurately hit the exact moment in the future when the style would once again be in vogue. Naturally, this observation made me think that perhaps he was a time traveler.

I’m not sure if it was me or my friend that started the next thread of conversation, but out of it arose a theory that—oh yes, I believe it may have been me—he was a ghost. Similar to superstitions surrounding Native American burial grounds, perhaps the building Nola, Darling now occupies was formerly a Warholianeque art collective–active sometime during the 1970s? Maybe Fancy Bag is a spirit stuck in purgatory, confined by the walls to endlessly roam Nola, Darling. This was all fine and dandy until my friend suggested we talk to Prof. Slackgaze about organizing a sleepover to see if Fancy Bag or any other ghosts might introduce themselves. “No no no no no no no no,” I quickly responded.

As we turned the corner, my pace quickened and I nearly ran to the front door of my building. There aren’t many things my brain is capable of ignoring, but as I explained to my friend, this is one thing I do not want to think about. I believe it’s very important to know when to say, “I don’t know.” It is our responsibility as individuals to make this habit the norm by fostering an environment that encourages rather than punishes those who are able to admit they don’t know something. It’s indicative of a willingness to learn and ultimately leads to personal growth. But for my own well-being, and despite my friend assuring me that Fancy Bag was a super-happy-awesome ghost, I am totally fine with putting my hands over my ears and singing “lala lala” like a stubborn idiot. The thing that scares me is logic; if that marvelous, benevolent ghost was real, wouldn’t his evil counterpart exist too? 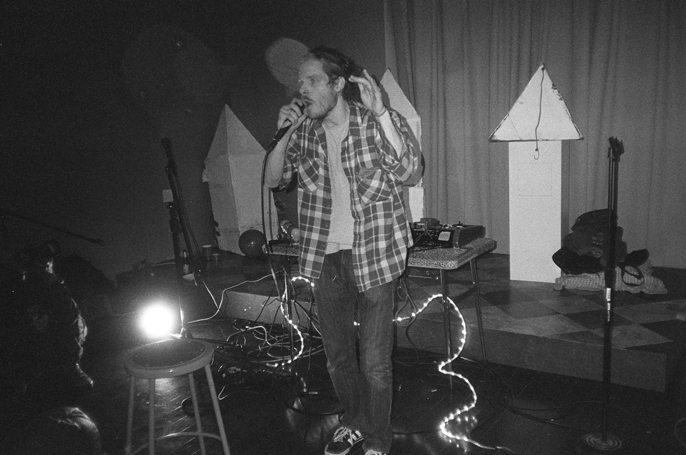 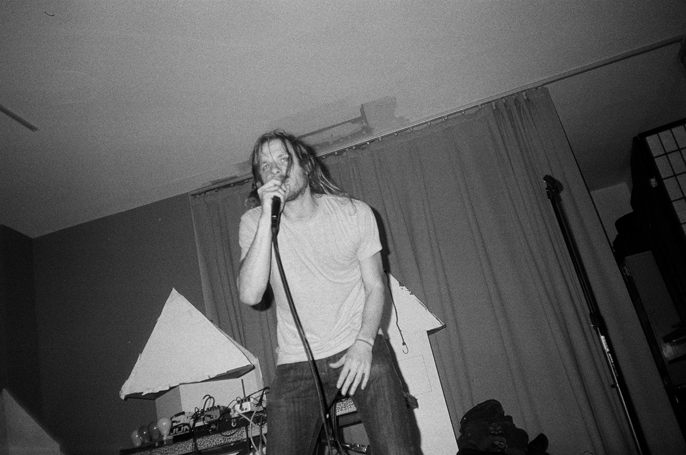 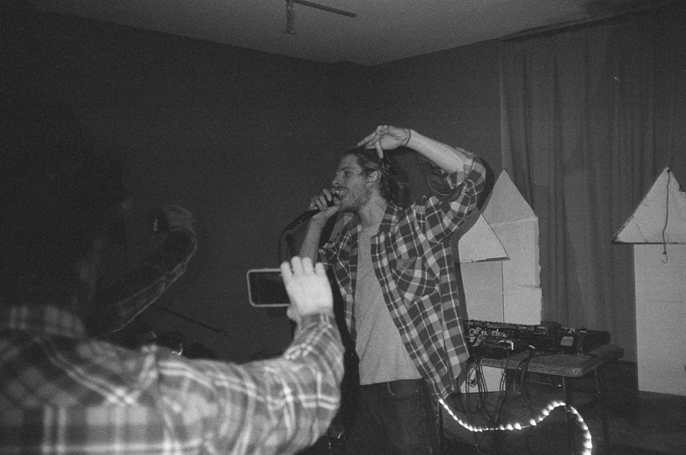 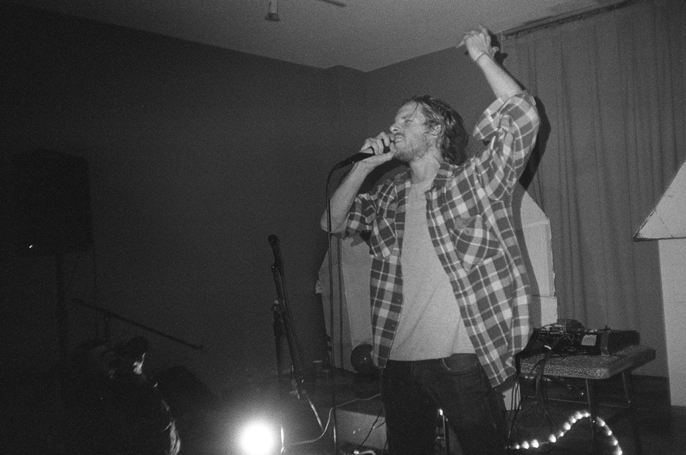 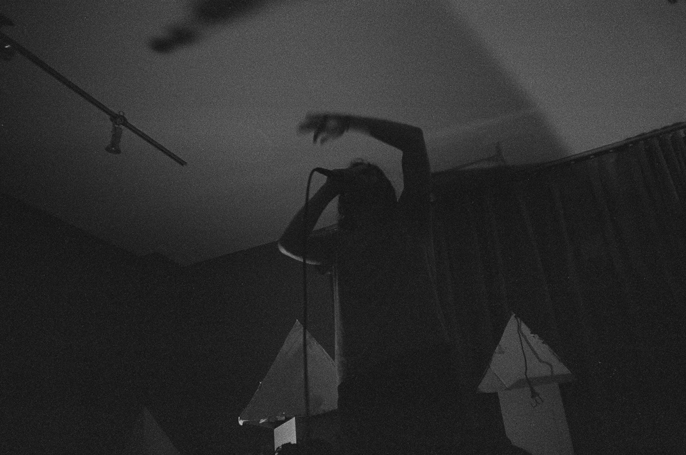 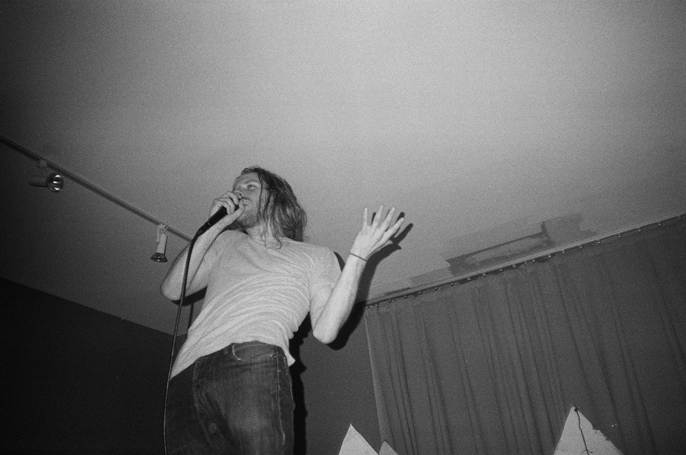 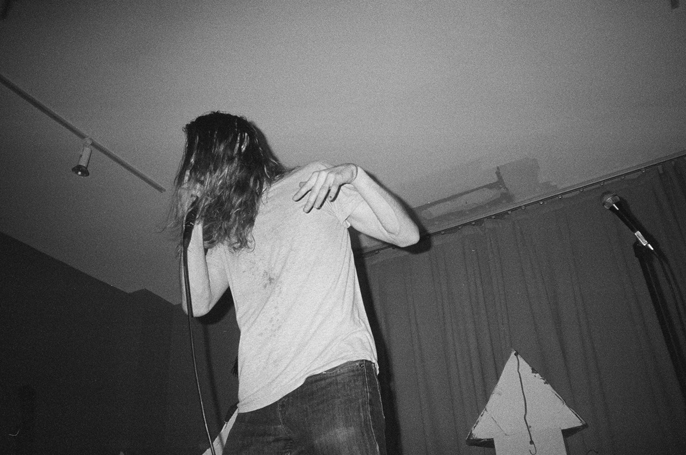 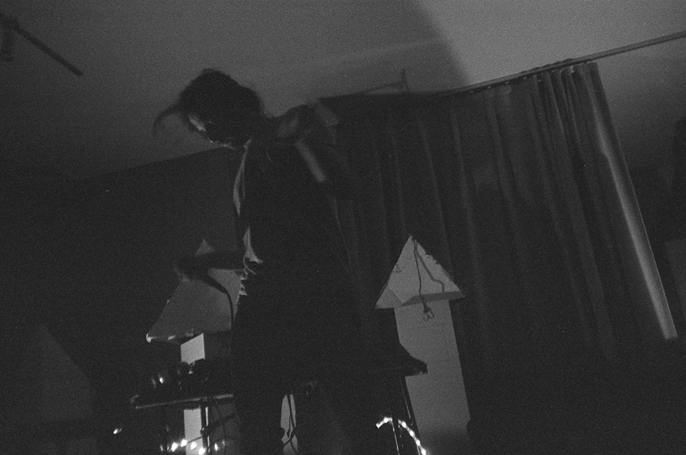 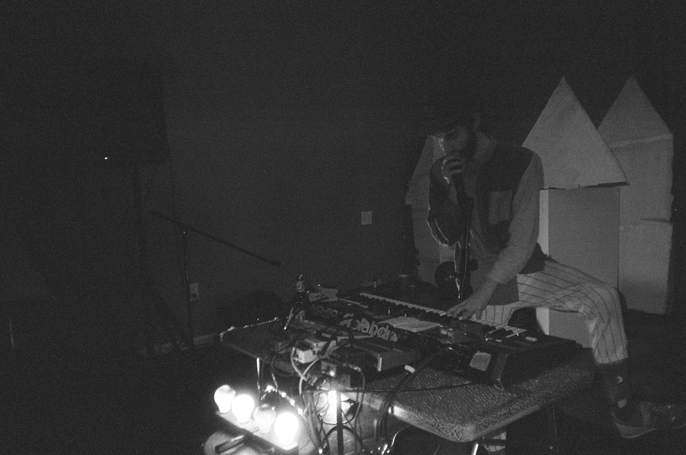 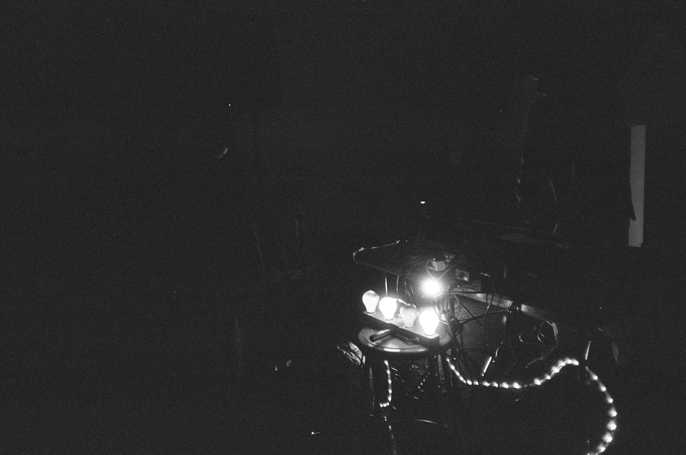 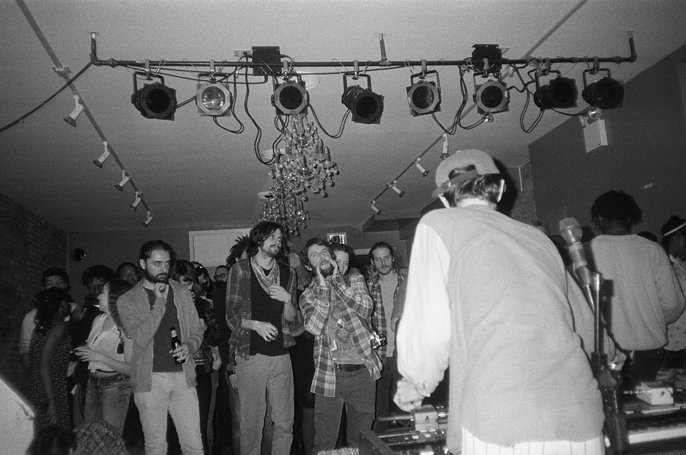 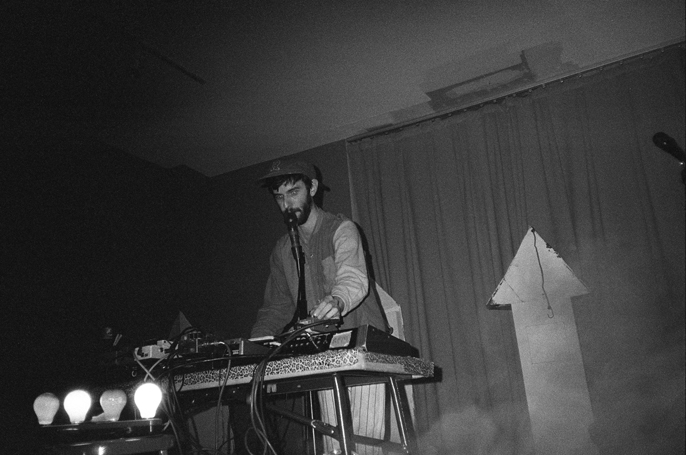 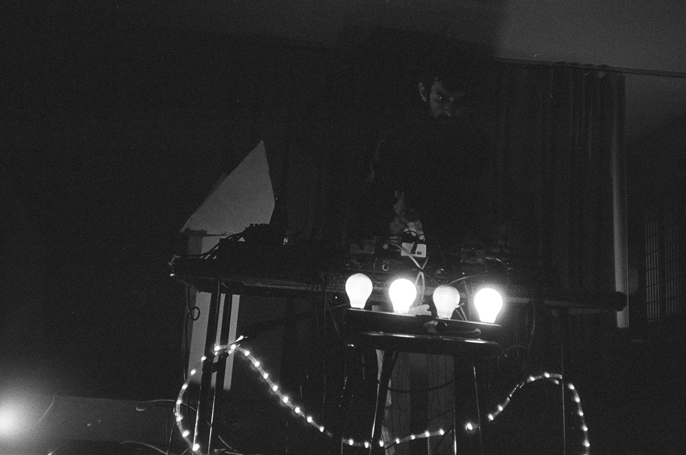 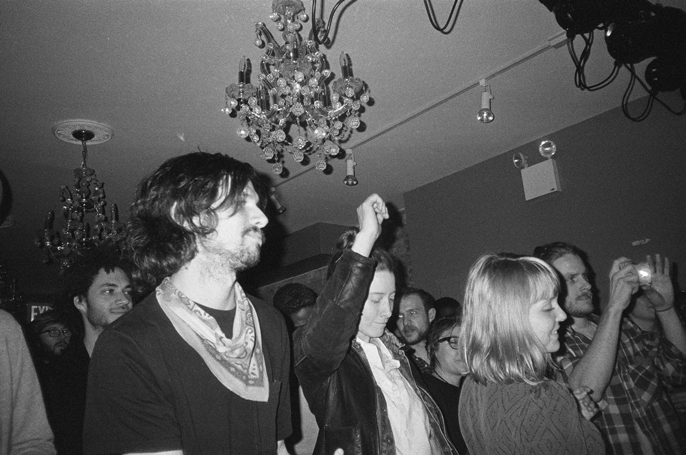 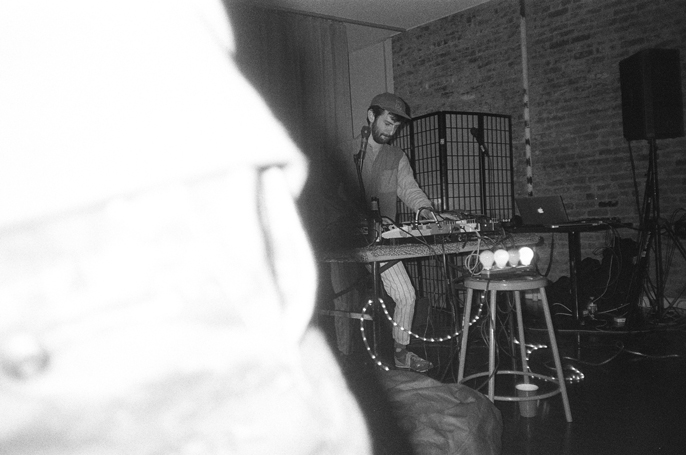 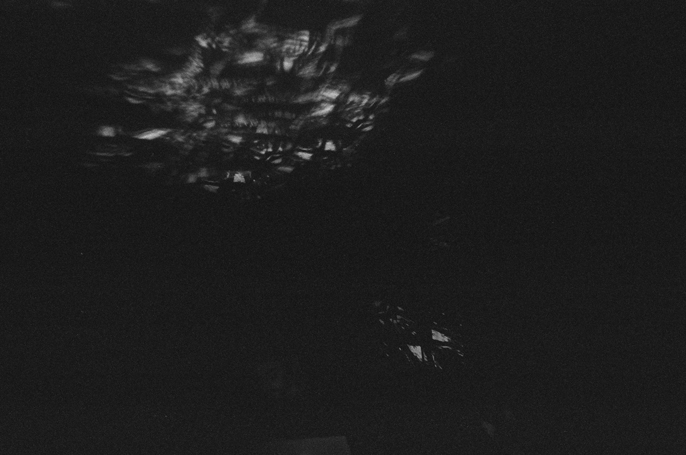 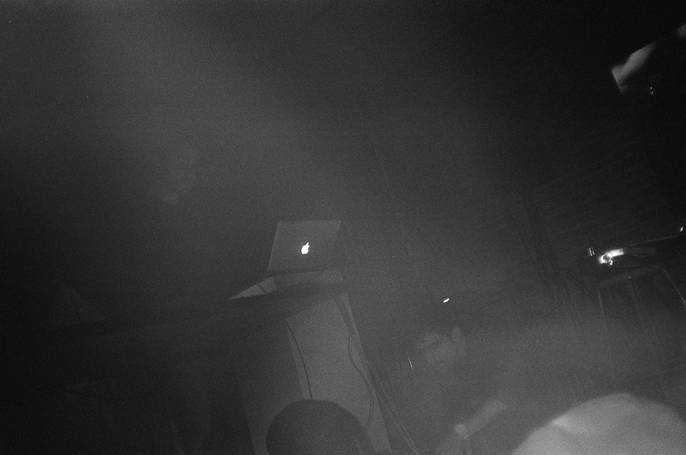 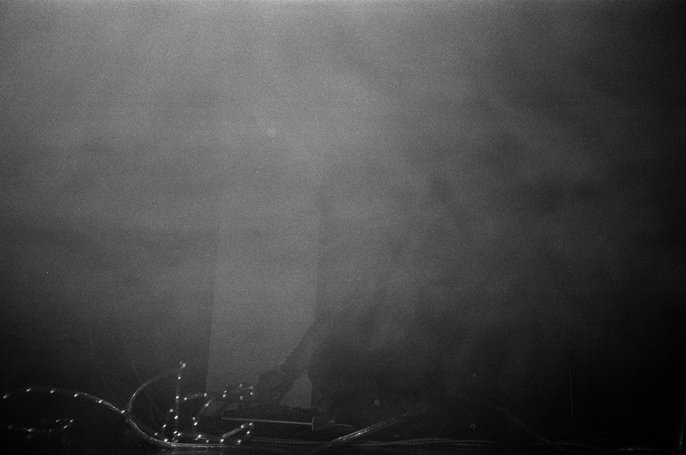 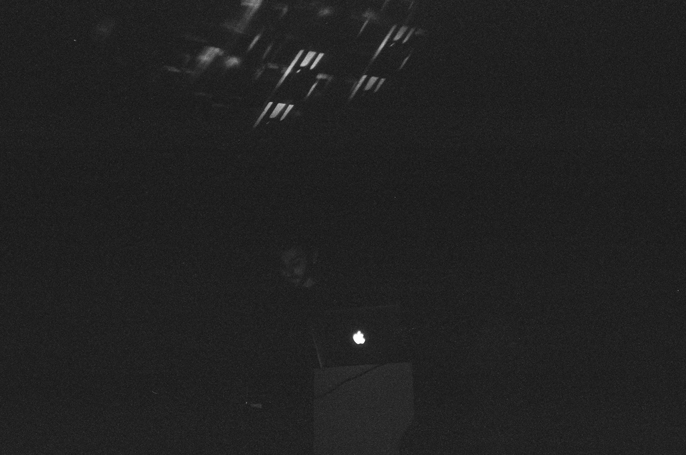 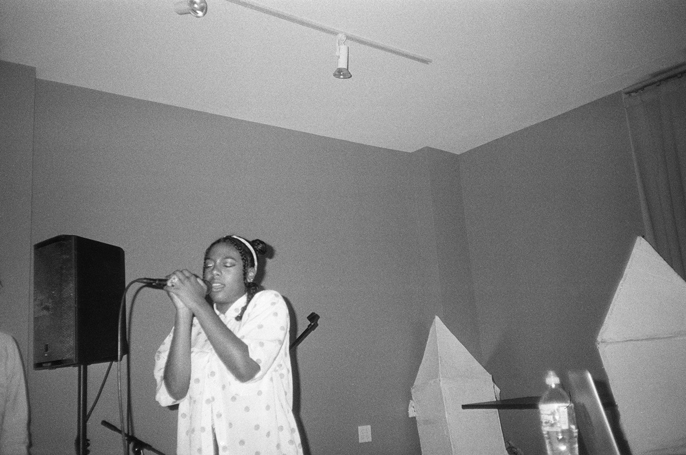 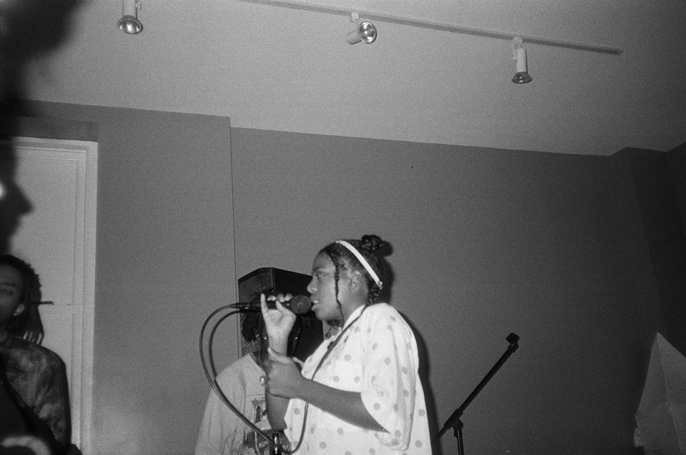 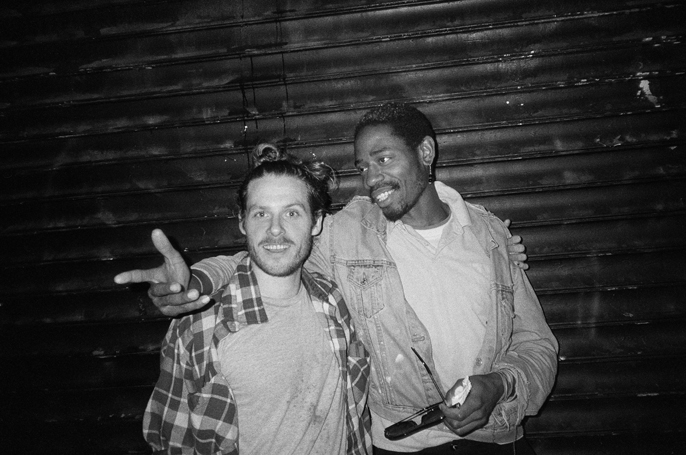 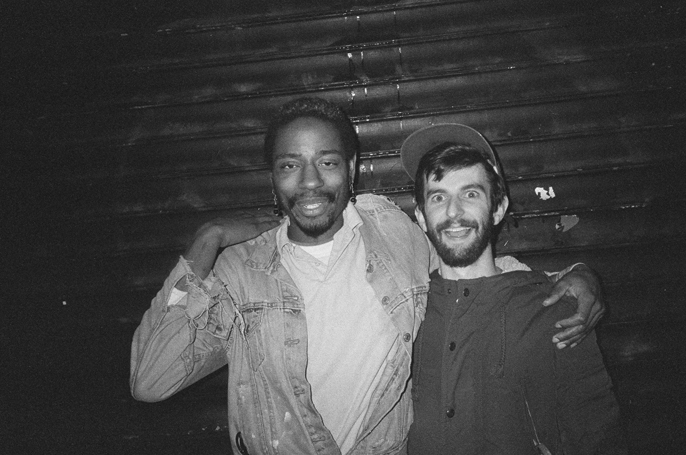