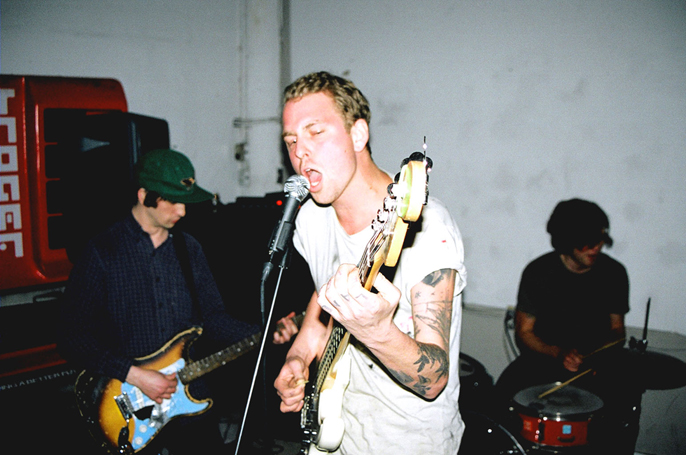 Retail brought their punk sensibilities, the scuz they project them with, and the pleasing while hidden liquids of melody that keep them from killing anyone listening to a fun-riot loft show a recent Saturday on Stewart Avenue in Bushwick. They followed a film clip fest, lasting only an hour, structuring a drinking regimen around the cut to each new clip. They called it the Power Hour.  I believe it was sixty film clips, so sixty units of whatever the loft full of kids on the floor were drinking. It seemed a good technique to get a good loose party started. Retail set up with no shade, in white loft-style flood light, with people packed in against each other up to the microphone stands. 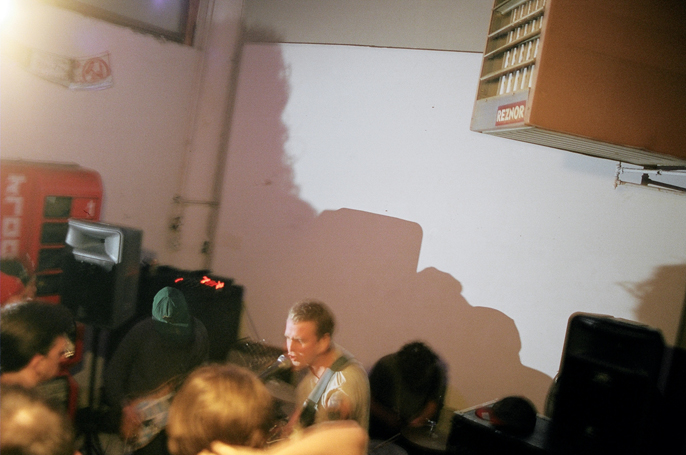 It was immediately apparent how well the band’s individual members filled their rolls sonically. The fewer members in a band the trickier arrangement gets, and as a three piece they hit nice and hard.  The tunes sounded predominantly bass driven to me. Retail’s bassist, Austin Jackson, also sings the songs, and with the way he sings outputting from his cortex going on at the same time it’s hard to see how the bass wouldn’t drive. The singing cut deep, Jackson’s voice was boiling gravel, somewhere in the middle of Darby Crash and the Witch King of Mordor. Half the lyrics were unintelligible, but that aspect fit well too. 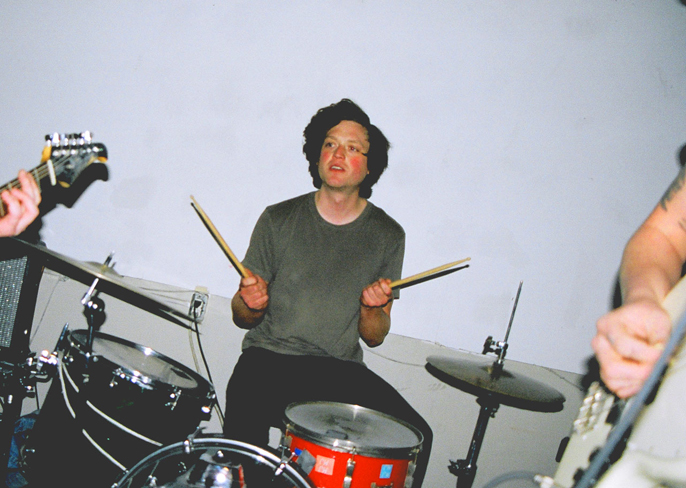 Ross Condon pled the drums accordingly, with a good sense of dynamics for the material. At times he played simple and heavy hitting Stephen Morris-like timekeeper beats, but layed well on the crash when things picked up, with some great machine gun snare fills in between. The guitar playing was a metallic assailant. Like dysfunctional machine parts hooked up to a fine artist’s brain, it carried the scuz along, with most of the melodic qualities of the music as well. It was this sure strumming on a sanded away old Silvertone strat that Troy Odell rounded out Retail’s sound with. The pummeling of the rhythm section and the hidden hooks in the distorted guitar gave Retail an attractive depth. It’s like the band has punk intentions but I walked away with a post-punk hangover. 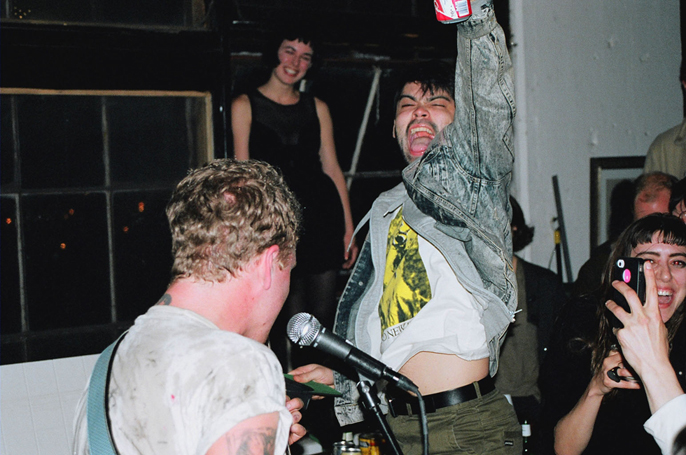 Three dollar beers were sprayed all over the place while the crowd of young people previously sprawled out like Romans on the floor blossomed into the selves they kept inside who were raised on sweaty basement punk shows. They were jumping and running all over each other, laughing most of the time. Retail had this effect for some reason. A lot of the feel seemed darkly contemporary, with protestation, yet with themes so seemingly grave people were smiling while they got knocked into. 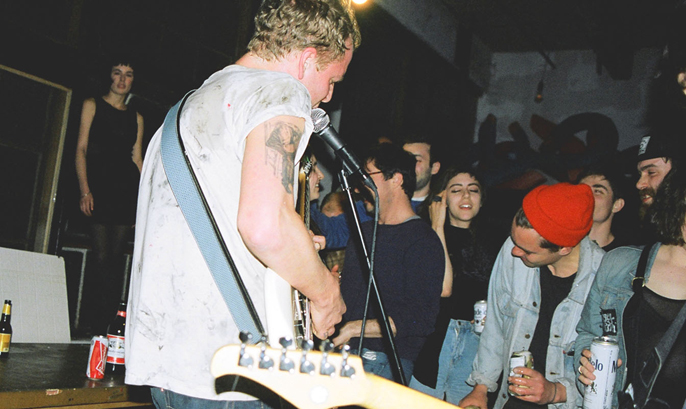 They’re recording in Bushwick currently and will have new material out soon. See them play  Pickthorn for Bushwick Open Studios this June 1st, year of our satan, 2014. 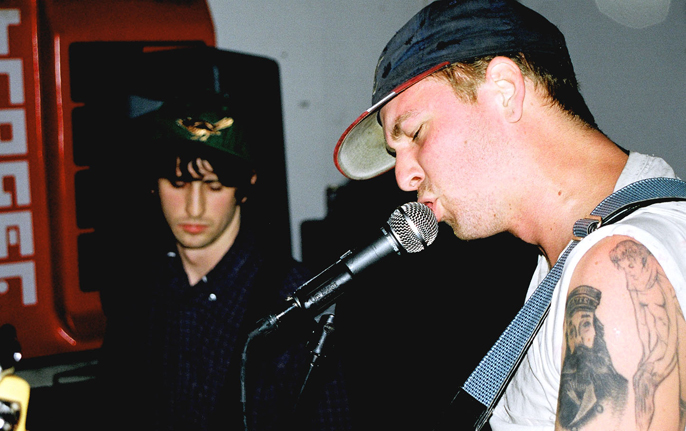 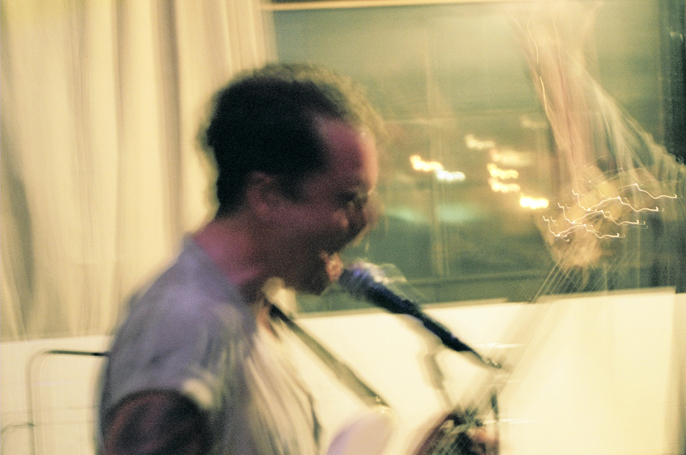 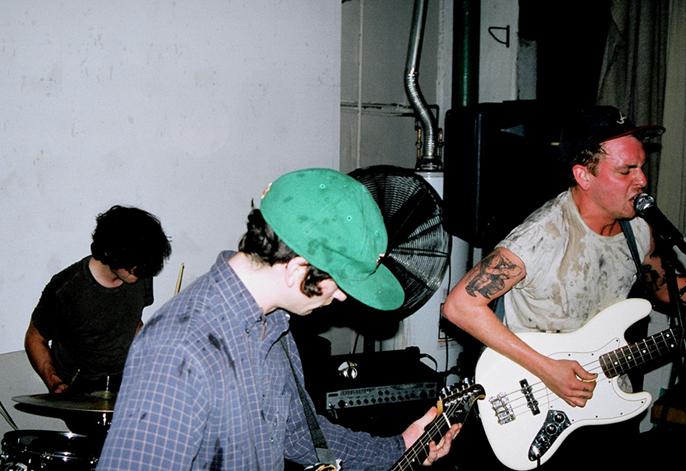