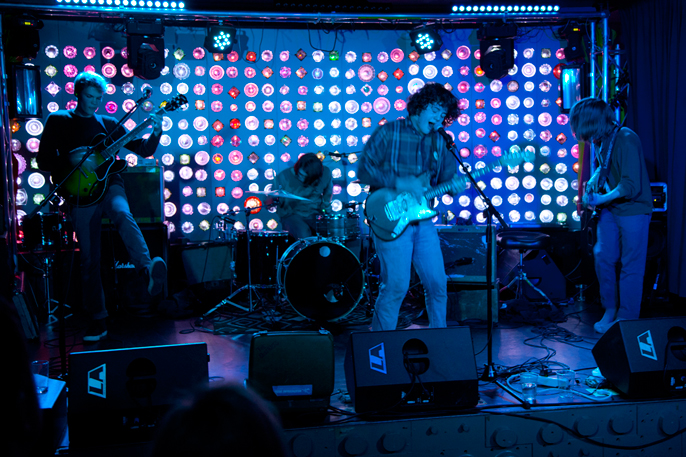 The music of The Districts is as emotive as it is inventive, a harrowing, grungy blues that sounds like a broken-hearted Neil Young in the midst of a killing spree. Their catalog makes stops in territories of vintage Americana, folk, and lo-fi ballad rock while lead vocalist Robby Grote explores the genres’ most poignant lyrical themes.

They put their own memorable stamp on these timeless genres by endowing each song with infectious passion. A moving EP release performance harnessed this power to give their repertoire new meaning and credence to my suspicions that they are making some of the best new music in the world right now.

A brief disclaimer before we proceed. When I see bands who inspire my passions, I often write with copious emotional metaphors. After several drafts of this review, I decided to curtail these tendencies so as not to encumber the power of The Districts’ performance. 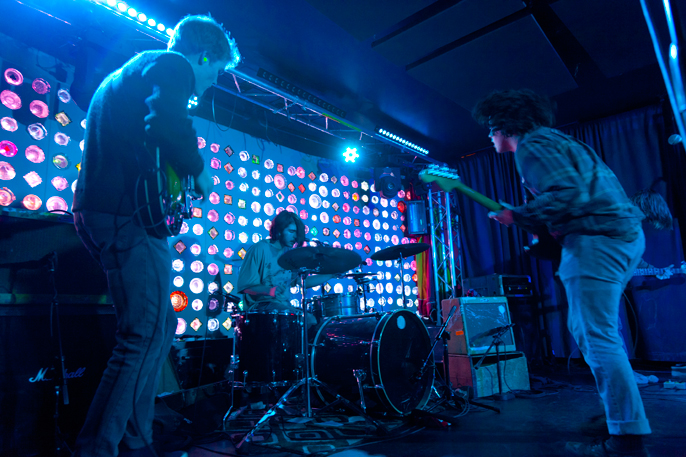 On to the show. Eager to turn the lights at Baby’s All Right, Grote provided no intro to “Rocking Chair,” a new track that opens the EP. Each musician played their lines with distinct, jagged emotion that somehow coalesced to form a tight wall of sound. Guitarist Mark Larson’s surprisingly sincere arena guitar hits were made more powerful when Grote pulled back for tender hooks. I went from clenching my fists to being lulled by gentle finger-picking and confessions: “I found the Devil inside me and I nail him back down…” then a group chanting of “WOO!” and they raged on with full force.

The next songs were carried by Grote’s bewitching charisma and vocals. I could fill an entire review just describing his voice,* the mere tonality of which made my entire body tingle. Like Joe Cocker and Tom Waits before him, he crackled and strained to convey a wider range of emotion than would a traditional vocalist. Overcome with passion, even his gesturing channeled superb range as he thrashed around bow-legged and snarling. His combined physical and sonic outpouring of emotion literally took up physical space as the front rows formed a perfect half-circle gap that bent furthest away in front of him. 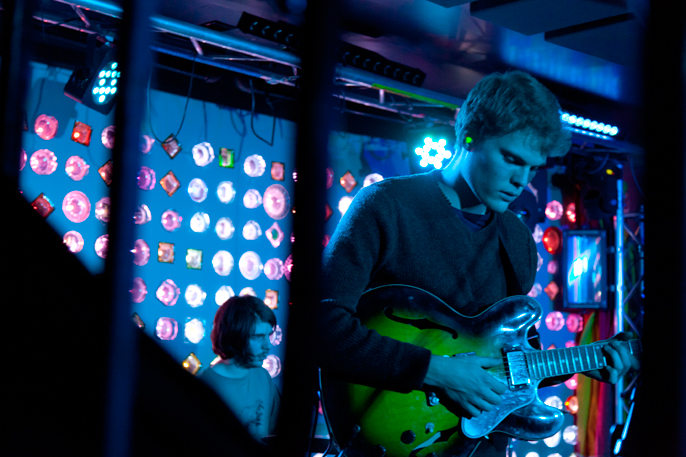 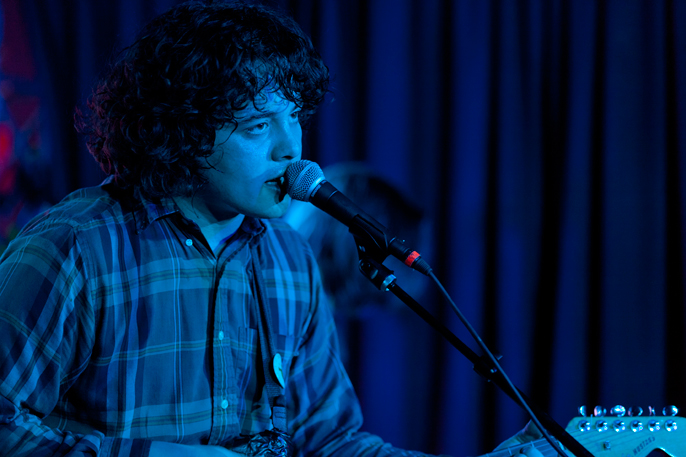 The remainder of their set showed deep emotional versatility that marks a higher level of talent. “Long Distance” led the pack, a compassionate list of troubles energized by the probing darker sides of the human condition. Grote is equally sweet–“I can see the face of the sun with your eyes closed” –as he is conflicted–“Ain’t it a shame we all become the things we never wanted to see at all?” — desperate — “Let me fill you up one more time” — confused — “Icky fears crawl up my mind” — and manic — “Reach around and pull away my spine.” In spite of its chaos, the song is immaculately crafted. It peaks with a tragically beautiful guitar solo that imitates Grote’s wailing vocals, and an ensuing refrain led by Braden Lawrence’s rhythmic drums that’s equal parts catchy and devastating.

“Stay Open” follows their trademark loud/soft/loud pattern but with quicker staccato. It also features harmonies from Larson that sound like disgraced angels repenting in attempt to curry favor with the gods. It brought me to the brink of tears. “Lyla” is a more tender offering, an intimate ballad sweetened by Larson’s slide guitar as Grote provided melody to the terrors we’ve all experienced in loving someone too much and not enough: “Makes me feel like I’m fighting to breathe, it’s only then I’m scared of dying/It’s only when I see you turn to go, I know I need your love to stay.” The most tender song was “Silver Couplets,” where Grote lamented innocence and love lost. 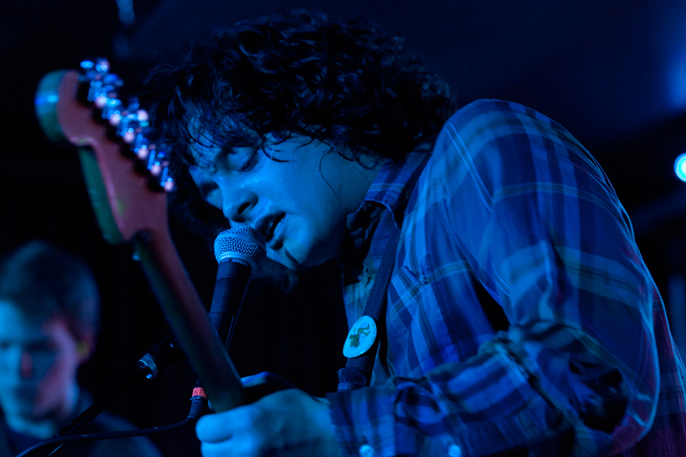 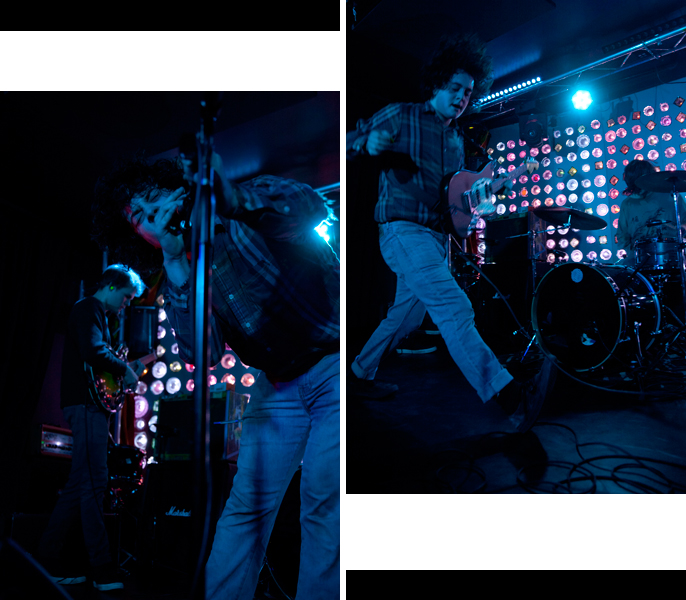 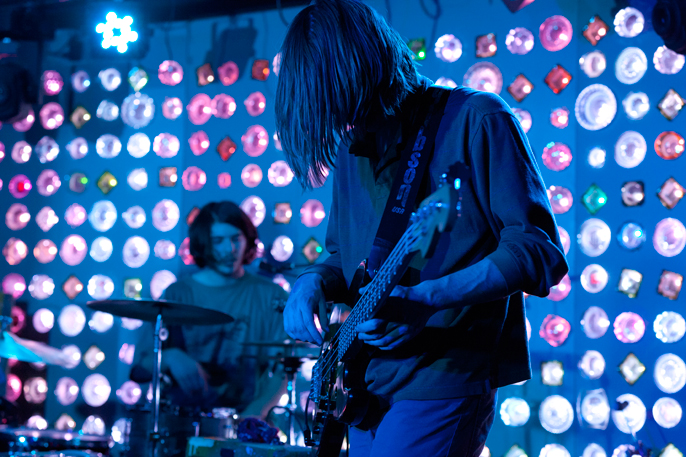 Even in painting with gentler colors, The Districts continued trucking along with consistent force and I started to worry that they wouldn’t be able to give a meaningful ending to their set. Continuing at this pace would be anti-climactic but any increase in intensity would be overblown. They did both and neither in “Young Blood,” a still unreleased, ten-minute epic that easily trumps their previous songwriting efforts. Verses dripped with trippy classic rock guitar, fastened together by an addictive R&B bass, until Jacobus’ bass solo segued into a jam that sounded so demonic it’d make the Devil blush. They played a slow build up of identical progressions with magically altered intensity at the same volume every time, each one more chilling than the next.

As the sonic war waged on, Grote stumbled around drunk off emotion and bumped into everything on stage. Normally when musicians abuse their instruments I roll my eyes, but when Grote did it, I was enraptured. He smashed his guitar into an amp with such emotion it looked like he was beating his wife. He threw it into the cymbals, then onto the ground as we all went fucking nuts. And it all became clear.

For the entire night I couldn’t figure out what inhuman force made me feel like I was rolling down the top of a giant roller coaster. But as their harrowing sound reached a pinnacle, I came to an epiphany. The angelic harmonies and demonic guitar outbursts, Grote’s entrancing vocals and “finding the Devil inside”–The Districts isn’t a band at all! It’s a literal monster of sonic energy that takes life when four energetic musicians peel back layers of rough skin to take their demons for a walk. 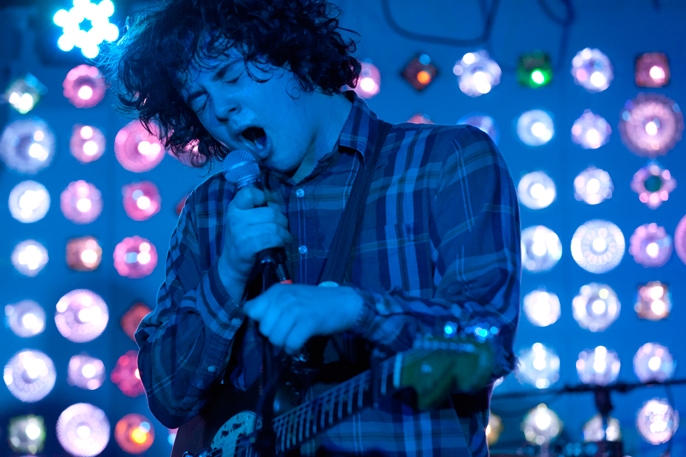 Where once raged whirlpools of sorrow, angst, and love sickness, there was now an empty stage. Feeling hollow, I thought maybe the Districts really were nothing more than a couple of ordinary Pennsylvania-born teenagers. Maybe. But I find it hard to believe that four mere mortals were capable of exploring Mariana Trench depths of the human soul with such emotional inventiveness, while conjuring such supernatural force. I tried to avoid emotional narratives, but to refrain from extravagant metaphor would be simply inaccurate as it would betray the unshakeable feeling that I had experienced something otherworldly. So until someone conducts infrasound readings on their EP release, or until the world produces a group as talented and musically precocious as these four musicians, The Districts will reign king.

*If you would like a review of just Robby Grote’s voice, write me at my Pretext e-mail or leave your address in the comments section and I will happily write one for you.