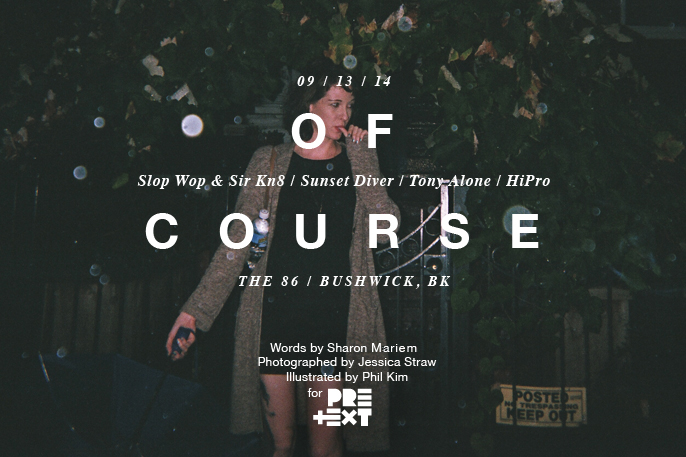 17 things that occurred prior to, during, and after the events held at The 86 on Saturday, September the 13th, in the year of our lord two-thousand and fourteen.

One.
Our transformation began to take hold on a rooftop somewhere near Kosciusko Station as the J train rolled by in great rattling waves every 10 minutes or so. Amidst the drizzle, three of us humans waited impatiently perched atop three matching black milk crates loosely arranged in a circle that bent beneath our weight. We spoke sporadically, soaking up the atmosphere in our quickly moistening clothes.

Two.
I begin to suspect we’re on our way when the damp, soggy roof starts to breathe a little beneath my feet.

Three.
We retreat downstairs, spending an hour drawing on huge swaths of tracing paper laid out on the coffee table. My brain takes a turn for the weird. I start to worry that drawing more will ruin what’s already been created. It doesn’t. This fact seems simple in retrospect, but at the time managed to launch me into a manic euphoria poised on the simple beauty of creating something from nothing, the beauty of growth and experience. 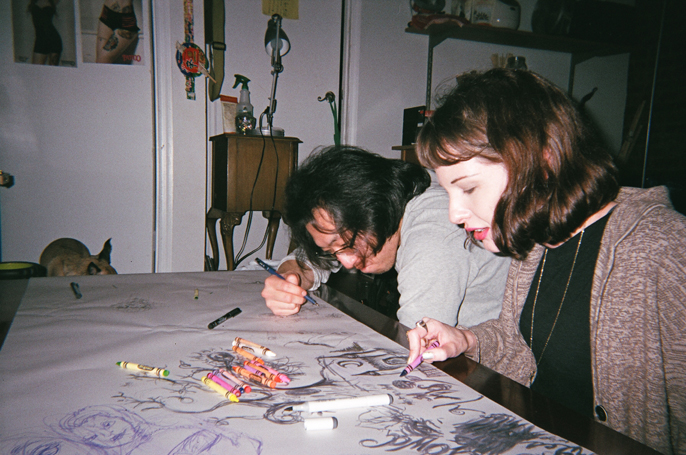 I come to believe that, in regard to daily minutiae, no wrong can be done in the world, no mistakes can be made; every touch of pen to paper served only to enhance what came before, serving as a testament to the beauty of creation, of making our mark on the world, of growing, of changing, of time passing and lessons learned. I begin to feel infallible. I begin to feel very sure in my decisions. This is a dangerous way to feel. 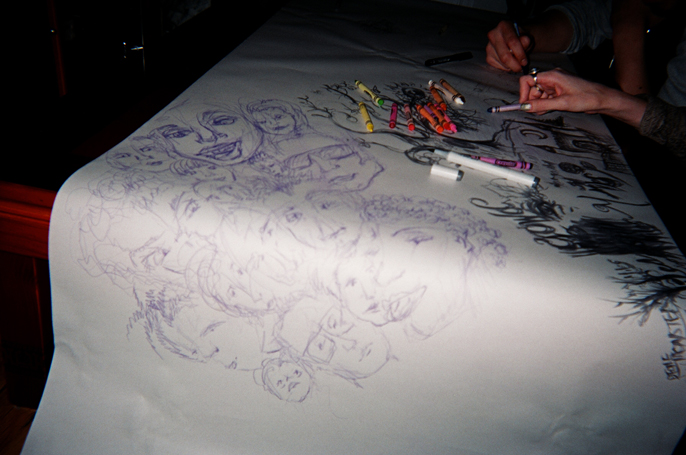 Four.
To a small extent, we doubt our capacity for facing the outside world. We begin to feel overly content inside, huddled together. Slowly, timidly we venture down the stairs and out the front door, deposited unceremoniously onto the dirty sidewalk in the rain. We check our vitals. We smoke more cigarettes. Everything seems fine. A collective feeling of “success!” permeates. 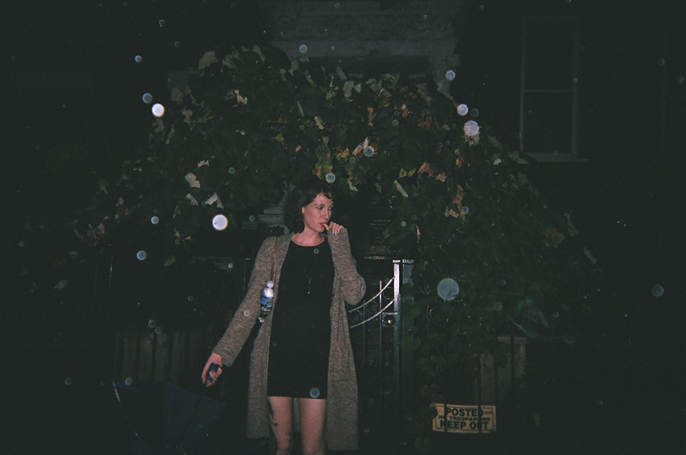 Five.
We walk in the direction of the show. Life feels cinematic. We float beneath the soft cascade of raindrops, light ricochets around us. We feel encased in a movie-set bubble. Feel invincible. Feel right. Feel okay. Everything feels good, feels preordained, feels like we’re being pulled by fate through the night and the rain and the light-rays to exactly where we’re supposed to be. 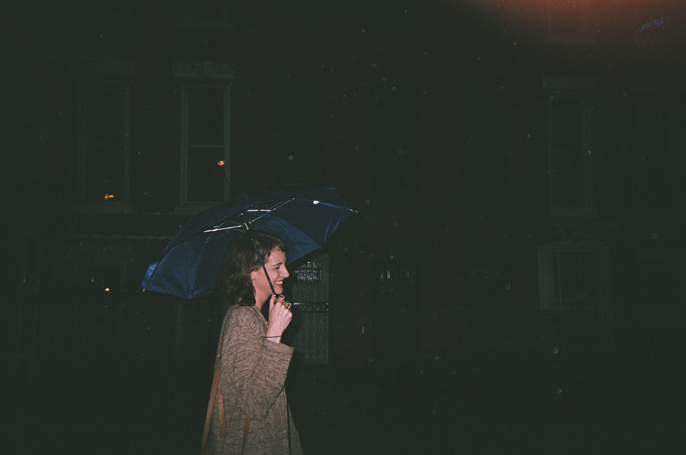 Six.
We arrive. We walk down stairs and the lights are red. They fade to green. Then back to red. It feels like “of course.” HiPro is playing music that also feels like “of course.” The electronic gurgles feel made for this moment. The walls breathe a little at us. We think we see roots in the concrete. People are strewn about on a small smattering of chairs and on the floor. Lolling about like some present-day opium den. I say, “of course.” We write “of course” on a piece of paper and hand it to someone. Her eyes widen. She yells, “don’t predict the future!” and runs away. 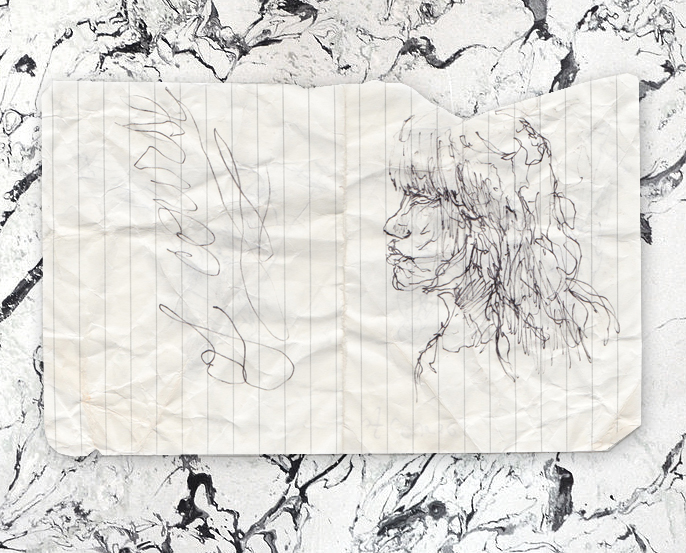 Seven.
I borrow sips off my friend’s beer, zone out to HiPro. It feels good. A handsome man in a sweater knitted with the stylings of a varsity jacket moves into the stage-area and launches into a karaoke-esque performance of what someone later tells me is part of a one-man musical by Tony Alone. Without context, though, I’m sent into a downward spiral contemplating sincerity. Sincerity in art. Sincerity in life. This internal crisis about what constitutes sincerity feels compounded by the high per capita percentage of mustaches in the room. I feel warm and happy. I feel confused. I feel like Tony Alone broke my brain a little. I forgive him because it felt nice. 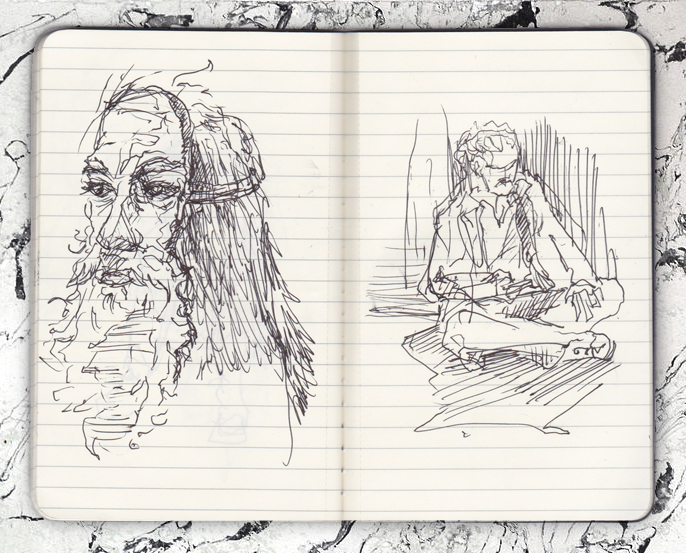 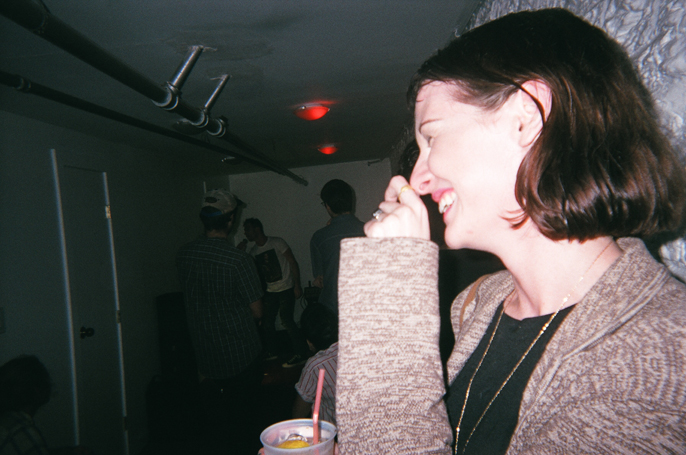 Eight.
I remember I’m supposed to write words about this night. I start to worry about the impermanence of a moment and the unreliability of memory. I begin to write things down frantically. Feel panic. Feel certain that this entire night will fade into the ether upon waking. End up writing mostly unintelligible things about the futility of recollection, the pointlessness of it, and the importance of people rather than things. Write some words about how beautiful it is that this particular collection of people should end up in this particular room at the same moment. Write nothing of use to anyone. 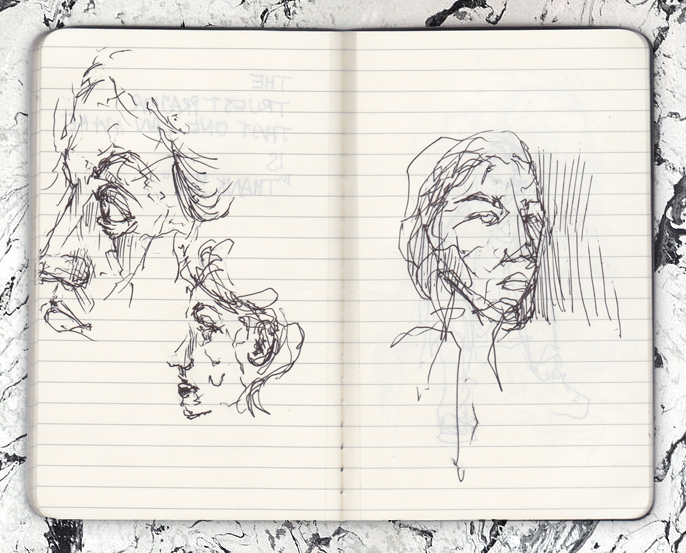 Nine.
A stranger takes my notebook and begins to draw in it. When he hands it back I see he’s found a fortune cookie slip I had tucked into the book weeks prior. The fortune reads “a new romance is in your future”. He has drawn squiggly lines around it. I feel hopeful to an unreasonable degree. 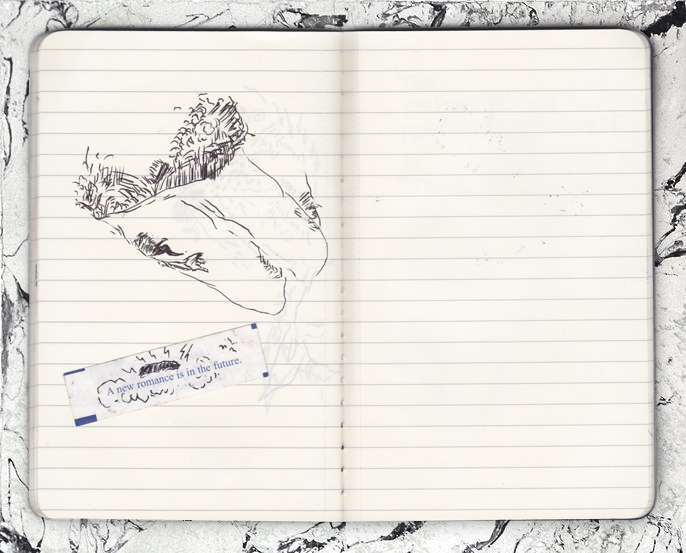 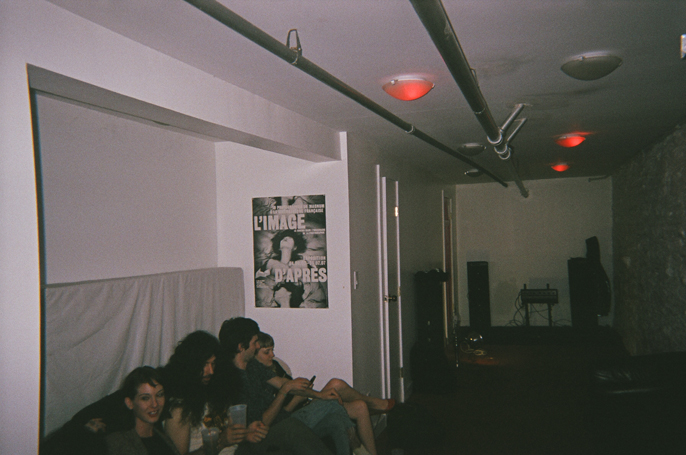 Ten.
In the corner, a man is concocting some kind of green drink. He says it’s a drug. I don’t believe him. I take some and drink it while he explains the myriad of mysteries contained within it. I worry that he’s insincere. I drink it and back in the stage area Sunset Diver makes a series of psychedelic sounds that also sound like “of course.” Movies project over his body as he makes sounds. Everyone seems languid in a satisfied sort of way. I think everyone probably feels good. I feel good. Until I don’t. 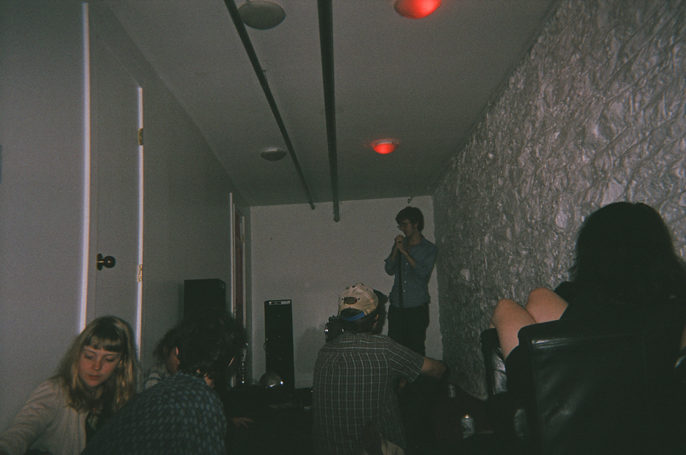 Eleven.
I go upstairs under the pretense of wanting to smoke. At the top of the stairs I glance left, to the back patio where people are actually smoking. My legs take me out the front door instead. I proceed to projectile vomit green drink in powerful neon streams on the front steps. And again on the sidewalk. And again in the street. 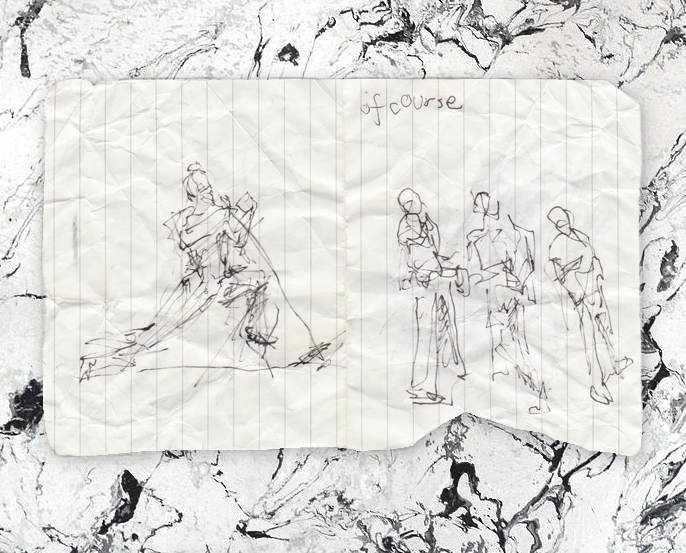 Twelve.
I begin to have feelings like, “I’ve escaped!” and walk in the direction I think I live in. I end up making a circle. My friend calls me, asks me where I went. I buy two decades-old granola bars, a bottle of water, a can of coconut water, and some crackers from the bodega. I return to the show, where I stand by the front steps thinking “of course, of course.”

Thirteen.
My friends retrieve me from the steps and shepherd me back down into the little basement. I sit on a small chair still thinking downward spiral thoughts around sincerity and authenticity and neon green vomit. Slop Wop & Sir kN8 begin to play, and suddenly I don’t worry at all about sincerity or authenticity at all, because somewhere in the midst of their bleepy bloops and dirty squelching and Slop Wop’s strained, distinctive voice, and Sir kN8’s dope ass flow, I feel warm and good and incapable of worry. 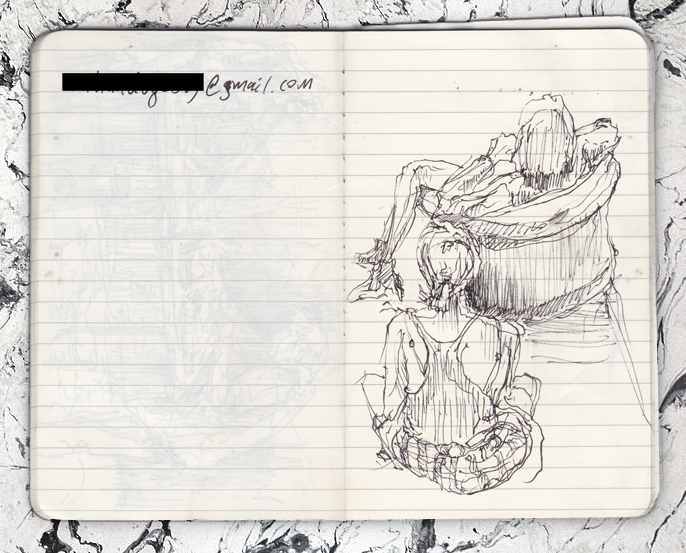 Fourteen.
In summary, I highly recommend going to watch HiPro, Tony Alone and Sunset Diver at the height of cerebral ecstasy, and Slop Wop & Sir kN8 toward the tail end of your existential trip, when perhaps your thoughts have taken a turn for the worst and perhaps you’ve just spewed neon green barf in great streams upon a sidewalk or into the street; when perhaps unease begins to sink its sharp teeth into your subconscious, because if there is a better sound than theirs to alleviate the kind of deep-seated soul despair that had begun to creep in between the grey folds of my brain at that moment, I couldn’t begin to venture to tell you what that might be. 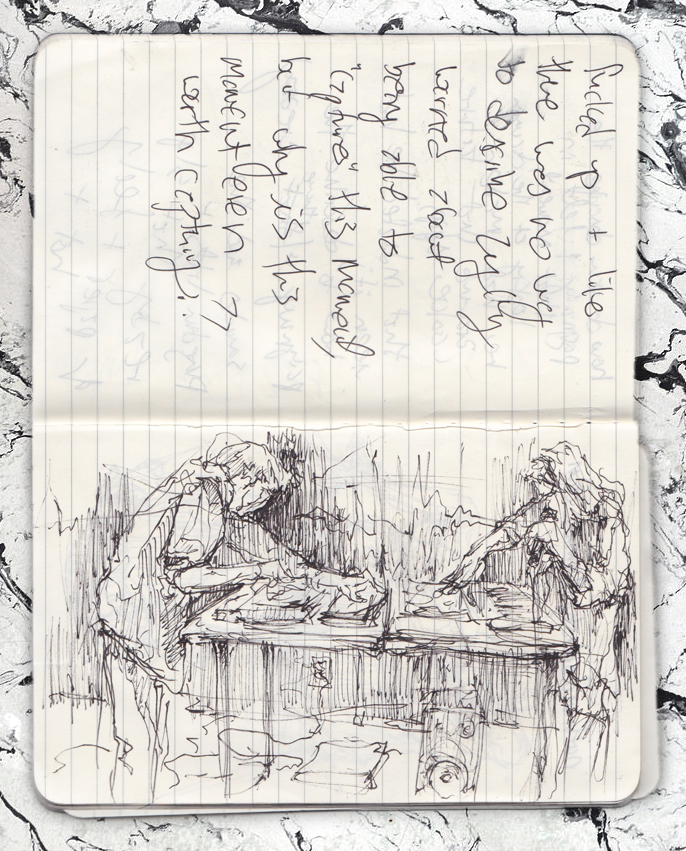 Fifteen.
As the evening ends, I feel like I’ve taken a trip of fantastic lengths. I feel all Gimli and Legolas and Frodo traversing to Mordor and back. I feel warm and good again. Feel all Robert Browning, like God’s in his heaven and all’s right with the world. I feel I have HiPro, Tony Alone, Sunset Diver and Slop Wop & Sir kN8 to thank. 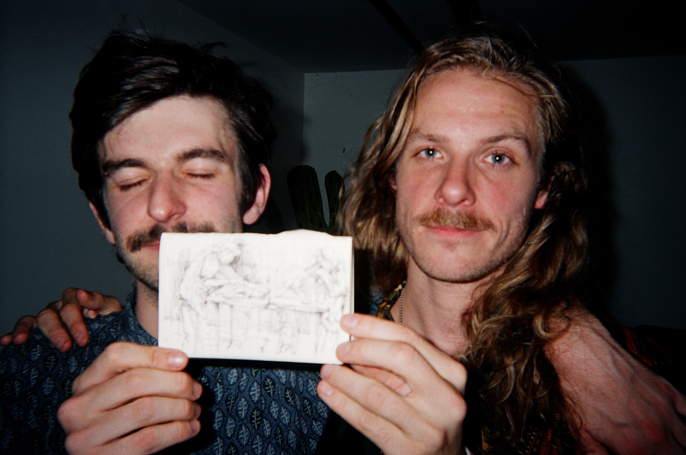 Sixteen.
I wander back to the proverbial Shire and proceed to watch Twin Peaks until the sun comes up. 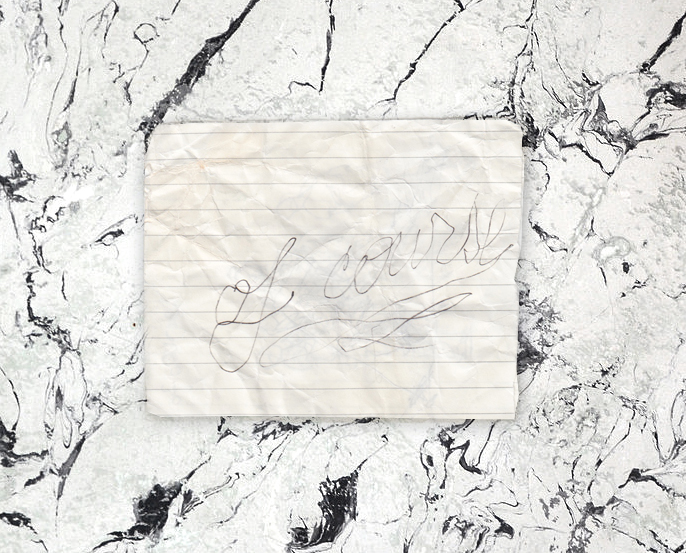