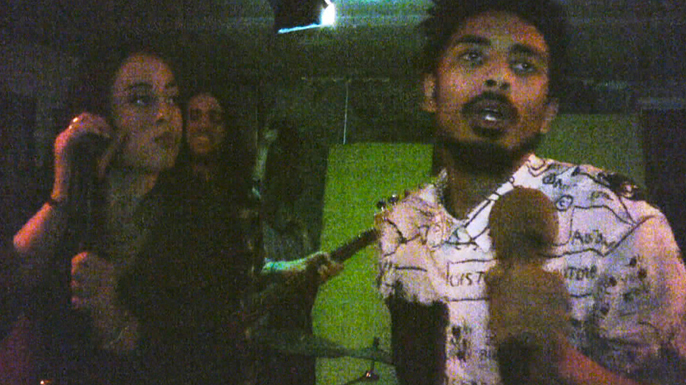 In the ever-diminishing world of soul music, there’s funky, and then there’s fonaky. Then there’s slap-Sly-Stone-cross-the-face-with-a-chicken-coop-and-ride-a-donkey-off-a-cliff funky.

And then there’s King Holiday.

A ten-piece outfit from Bedstuy, Brooklyn with a sound self-described as astro soul, their music draws from Jimi Hendrix, James Brown, the Talking Heads, and Lee “Scratch” Perry alike. It’s the kind of music that would have James Brown and Michael Jackson rolling in their graves — so they can co-host a subterranean dance party from their tombs.

Gearing for an upcoming single release, the band’s multi-talented frontman Les Kujo curated an über hip gathering at the band’s Brooklyn loft this past Saturday, slapped with the moniker “Soíree: An Evening of Music and Merriment.” The main floor of their lair-du-funk had food, drink, ambient lighting and various other accouterments, which complemented several billed hours of basement musical entertainment: the band’s electrifying grooves sandwiched between two DJ sets.

My anticipation grew as time crept past the advertised ten o’clock showtime. A band of such high caliber playing in their own basement with an undetermined amount of guests amidst a snowstorm that had delayed their arrival and had me guessing as to what the night would hold.

At 10:40 we were shepherded downstairs and treated to a lengthy free-form jam. Just as the crowd started dancing as a unit, Kujo swooped in to lead the band in their trademark opening number, a seven-and-a-half-minute long epic funk jam entitled “Breathe.” A diatribe against the ennui of modern working life, the song is tight as hell, delicately balancing catchy hooks with breakdowns that grab you by the gut. Cue the womp womping horns, brain shattering drum fills, and…HOLD UP! HOMEBOY CAN DANCE. And I mean fuckin’ dance. 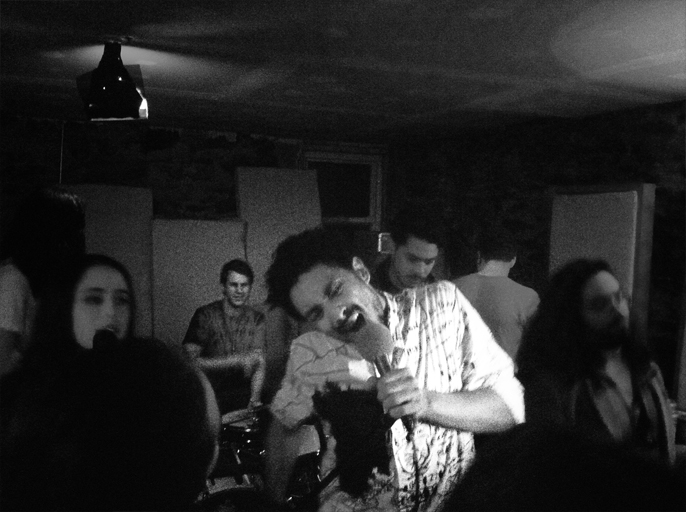 There’s dancing and there’s run-and-tell-yo-mama-you-need-a-new-pair-of-drawers dancing. And then there’s Les Kujo. My dude, did you secretly slather the stage in Crisco oil before we got here? The man was everywhere at once — shuffling from one side of the room to the other on an invisible tightrope, balancing on a drum kit, collapsing to his knees and full out lying on the ground — dude’s got the stage presence of Black Elvis meets new-age James Brown.
One song into the set, and my mind, spirit, and body were already all shook up. A unique combination of a visceral reaction to the group’s deeply sensual sound, a full band Wailing — that’s wailing with a capital “W” — with intense musicality, and Kujo’s mesmerizing tightrope act.

King Holiday then busted out “Bus Driver,” a jankier, cowbell heavier iteration of their trademark sound. The crowd started to pack in closer. The energy was rising.

It continued to rise as the band concluded their third song, “Snowman.” How appropriate — even the snow-blanketed streets of the NYC Metro Area were tame in comparison to what was about to go down in here.

I could feel the roomgeist thicken, like pre-storm humidity that would inevitably break into a hurricane of sexy. Indeed, it was at this point in the set that the tension started to burst. “Soîree” my ass — with all the bumping and grinding going on, the event might as well have been a [very tasteful and fully clothed] orgy. Drum wizard Miles Spillane got up from behind his kit mid-song to suck face with his girlfriend. There was literally an entire row of girls dropping it low in unison, on command. Even the chemistry between Kujo and back-up vocalist Chesney Polis exploded at several points. I looked to my left and saw my brother dancing on his lady friend. Sure enough, I looked down to find that whatever funky demons Mr. Kujo had summoned out of that cowbell had thrown my jacket to the side, removed my sweater, and unbuttoned my shirt. Bigger forces of energy were clearly at play, and who was I supposed to protest? 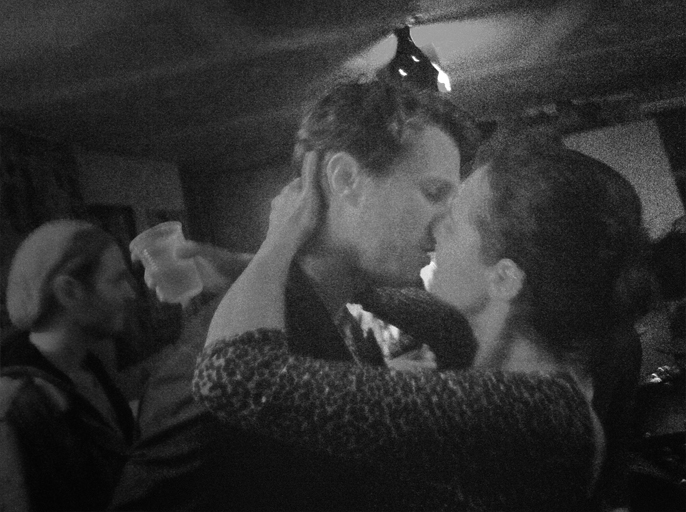 Nine, ten songs in, and hurricane sexy raged on. In introducing one song, Kujo cried, “This is why we’re here!” It was unclear, however, if he was referring to doing the nasty or the new song they were about to premiere. Explicitly it was the latter, but implicitly… who knows. Either of the two were cause for celebration, and we all rejoiced collectively.

“Dub of Love,” the ostensible final song of the evening, was easily the most powerful showcasing of King Holiday’s unique and sensual sound. Double entendres abound, Kujo coos and croons to his love, Mary Jane, such lines as, “I just wanna break you off, and pull on your hair.” A devastating horn section dictates the groove’s intensity, coming and going as it pleases, each time leaving you longing for its return. The crowning achievement, however, is a solo courtesy of guitarist Ben Lieberman. 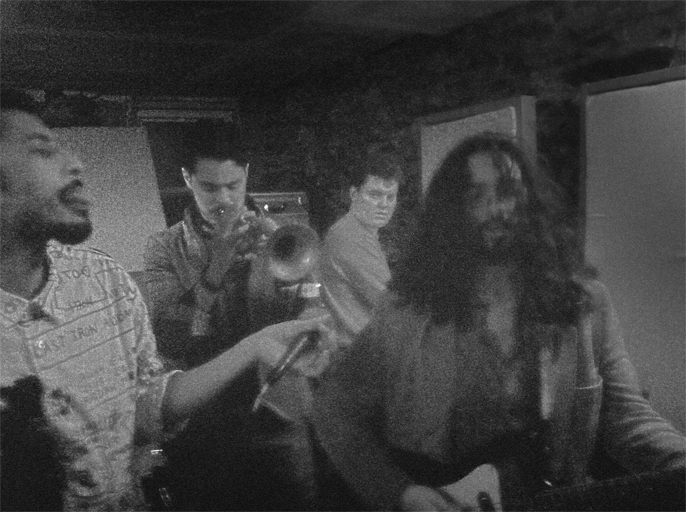 I must emphasize that beneath the alluring, sensual fog that enshrouds this live show are scarily talented musicians and intelligently crafted music that never comes close to broaching pretentious. Amidst a Brooklyn scene consisting largely of disappointingly derivative musical acts, King Holiday stands alone on a pedestal by the grace of their soul, passion, and charisma in creating a truly innovative and exciting sound. This is done with peak musicianship, each instrumentalist outdoing the other with ease. As an amateur drummer, however, I must single out the remarkable talent of Spillane as being truly extraordinary. 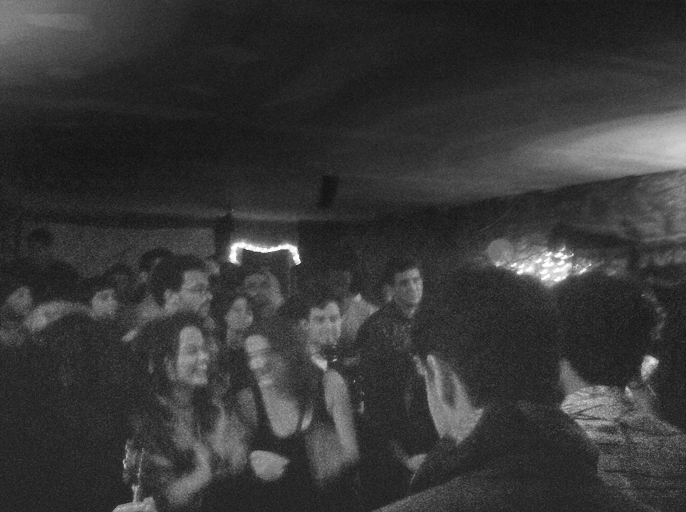 But I digress. Hurricane Sexy rages on. Upon “Dub” ’s conclusion, the crowd erupted into a snowballing chant of its main hook: “I need your loving baby, I need your loving baby, I need, I need…” propelling King Holiday into an extended take. Not needing to be asked for an encore, they promptly continued into an impromptu dub jam, with continued feats of musicality, this time punctuated by blaring bass (Andrew Friedman) and Kujo’s reggae-scat. All hell broke loose, as we all realized it was our last chance to really get down. Inhibition was but a forgotten ghost of the past.

When it was all over, I re-buttoned my shirt, pulled up my pants, and returned home. A truly satisfying “Soíree.”