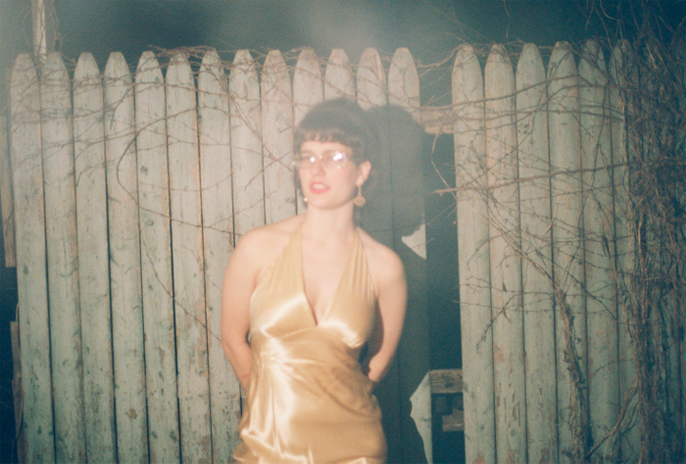 Cal Folger Day is an NYC-based performer, songwriter, and modern-day Renaissance woman. Her music is a unique blend of country and jazz and self-described as “witchy folk.” Her most recent EP Drom-d’reau reinforced her growing reputation to captivate with a timeless, often romantic, sound.

MCLEOD: Tell me about the process that went into EP Drom-d’reau.

DAY: We released it back in May and just got the vinyl a couple weeks ago. At the risk of sounding like an utter kook, it was a word that came to me in a dream. I had a couple titles in the air, but I just had this funny word that kept repeating itself in my head like an earwig. It was funny because I couldn’t quite spell it, and it’s funny to really know a word but not know how to spell it. So I just kept writing it down and writing it down; and finally I mentioned to my boyfriend that it was going to be the name of the EP. Turns out that I had been spelling it wrong the whole time! The reason he knew it was that — it was an Irish place name, a way that Irish place names are written. It was basically my brain trying to work out how the Irish language works.

MCLEOD: What does it mean?

DAY: I dunno, it was just something that popped into my head. It’s a great power trip, because now there are lots of people — well not so many people — walking around saying EP Drom-d’reau and that’s so satisfying to me.

MCLEOD: How do you write your music? Is it more collaborative?

DAY: No, it’s definitely not collaborative. [Laughs.] It’s terrible and lonely. I suppose it’s collaborative in that I need other people to give me deadlines. I usually write songs for rehearsals because I know that I should have a new song. Most of the songs on the album are written that way. 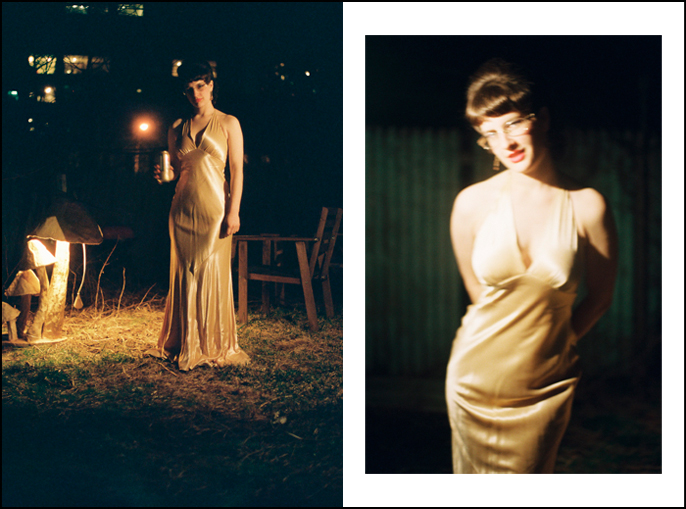 MCLEOD: You are more spontaneous with your writing?

DAY: Yeah, if I try to sit down and really take time to write it I end up writing a verse here and a chorus there, and I start to lose interest. I’ll treat them very preciously, and I become terrified of them, because I am thinking way too hard, so I schedule rehearsals so that I will write songs. And on the train ride I can find some words and figure out some chords that way.

MCLEOD: Do you keep idea books? Do you have a dream journal?

DAY: I rarely have the energy or the wherewith-all to write down anything that comes to me in sleep. But yeah, I write down ideas all the time. I need to write to process information. It’s like taking notes in class; I’ll lose it. My journals are basically like a bad fishnet — there’s no emotional value in them. I’m also almost always wrong about what ideas are good. Usually the ones that I just wrote down and forgot about are great and the ones I really thought were going to be valuable are utter crap. Whenever I’m just writing to keep my hands busy, then it’s usually much more valuable.

MCLEOD: It’s more like a stream of consciousness for you?

MCLEOD: Ok so with that said, walk us through how you wrote “Ghost Hands”.

DAY: Well that’s just pure words. The music is mostly nonexistent. I wrote that song a long time ago and forgot about it, and I just dredged it up so that we could walk through it. And decided that it was going to be a good candidate for what we were trying to do in the studio.

MCLEOD: Why did you choose it for the music video?

DAY: Well… It was pretty much the first song we had done… [Laughs.] 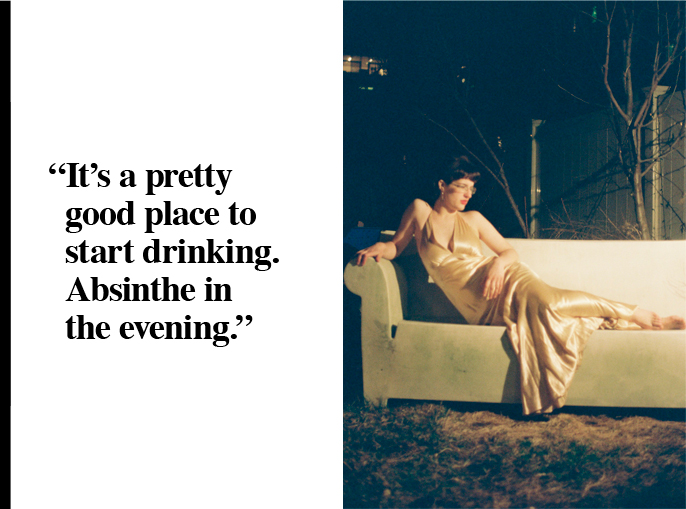 MCLEOD: Talk about how you wrote “Ghost Hands” and what it is about.

DAY: It’s an older song. But without sounding absurd, I was squatting in a warehouse in an empty room, and I only had a bag of stuff on me at a time.

MCLEOD: You have come so far now!

DAY: No way, those were the glory days! That was it. Simple living. I just had a tote bag and a rug. My boyfriend had just moved to England, and I was trying to figure out why some songs are easy to remember. And it’s not just the rhyme at the end of the lines, but that there are many little connections between the words throughout the line. It’s kind of a really dopey song, but I was paying attention to little bits and pieces on the inside that are a little jarring and would stick in your head. It’s just having that sense of longing… and enjoying it. Just having excruciating, pleasurable, agony and anticipation, and you just want it to stay that way. You know, just wallowing in your own self-pity as a way to make yourself feel better.

MCLEOD: No better place to do that than in an abandoned building right after your boyfriend left.

DAY: Yeah seriously, melancholy! I mean, could I feel more sorry for myself than in a tiny whitewashed room sleeping in a Mexican cell? It was right at the Lorimer stop above that laundromat. It was going to be condemned any day so you just had to have a bag of stuff and be ready to get out of there. My guitar player lived there too along with like fifteen other people. That was a crazy building, man. I mean you went up to the 7th floor and you had full skyline views of Manhattan and Brooklyn! That’s where we had rehearsal! It was a completely empty floor with 60 windows. It had been a living space owned by 3rd Ward, and the landlord had been involved with some shady business, so they pulled out. The police came in and moved everybody out two days after I moved.

MCLEOD: Where did you move?

DAY: I moved to London. I was just saving up.

DAY: Exactly! Cutting all the corners!

DAY: Absolutely not! I was a celibate lady that year. I did start drinking there though. They have their own port there, the Oxford University port, and not beer but fortified wine. Each college in England has their own vintage that they bring to events. You would have lectures in the afternoon and then all the churches would come with free wine. Yeah, it’s a pretty good place to start drinking. Absinthe in the evening.

MCLEOD: Wow, you weren’t playing around!

DAY: Well I didn’t really know how to drink, so there was a bit of a learning curve. 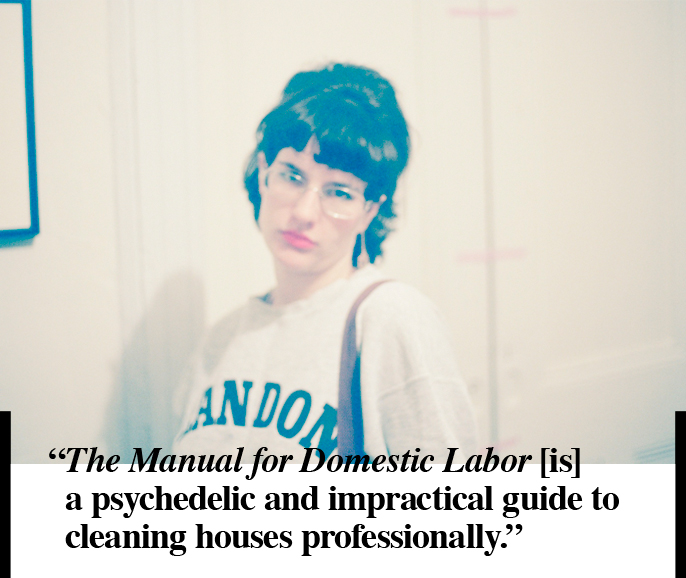 MCLEOD: Lets talk about the million other things you have going on. You have your zines, your Béla Bartók project, your writing, and you are making some new recordings.

DAY: I have been putting together these little books for my friend John Doyle who passed away this past autumn, and I had done an interview with him and transcribed it and suddenly he passed away. So I printed it for his memorial service, and it was a big hit at the funeral as bad as that sounds. He was great. He always printed his own poetry, and I think he would have loved it. I have been a housecleaner in New York for the past couple years and in order to deal with that, I have been putting together The Manual for Domestic Labor. It’s a psychedelic and impractical guide to cleaning houses professionally. The first volume is out and it had four guest illustrators. So I made that and had a table in the Brooklyn and D.C. zine fests, which was a lot of fun. It’s funny how much they have changed from the 80’s where they were mostly photocopied and had more political and music themes to them, like the punk DIY scene. But now they are a real alternative to standard printing and publishing. A lot of them are kind of winking an eye to the zines of the 80’s and 90’s in an almost ironic way, but there are some where people really step the quality up to another level. It’s cool to see the mix.

MCLEOD: What else have you been up to?

DAY: Well, I recently organized a production of 6 Children’s Choruses by the Hungarian composer Béla Bartók. I made a zine to accompany the performance and to give the viewer some sort of a backstory as to what was being performed — and it was the program for the evening.

MCLEOD: So you were basically trying to revive him and show him to a new audience?

DAY: Well I just love his music so much and think about him a lot and his struggles. I just thought that my love of him would make it easy to perform his music, but it was actually really hard. You have to love all these other little things like photocopy stores and cell phones, et cetera [laughs]. But we had a six-person band and a six-person choir, and we did the full six-person chorus at the Jalopy Theatre in Redhook. It’s really great to work with a piece of music where you can really see the bones of where the original folk music was. And seeing how different and original it was in the way he sets it.

MCLEOD: Why an all women choir?

DAY: Well it was originally arranged for a children choir and the range is a treble range, and we discovered that there is a certain lightness and sweetness to a child’s voice that is very difficult to replicate with these curvaceous, voluminous instruments we got on us right now. So we certainly weren’t picking songs willy-nilly. 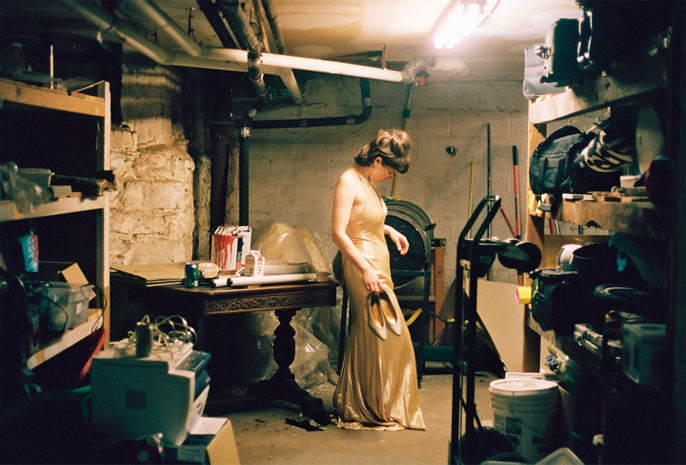