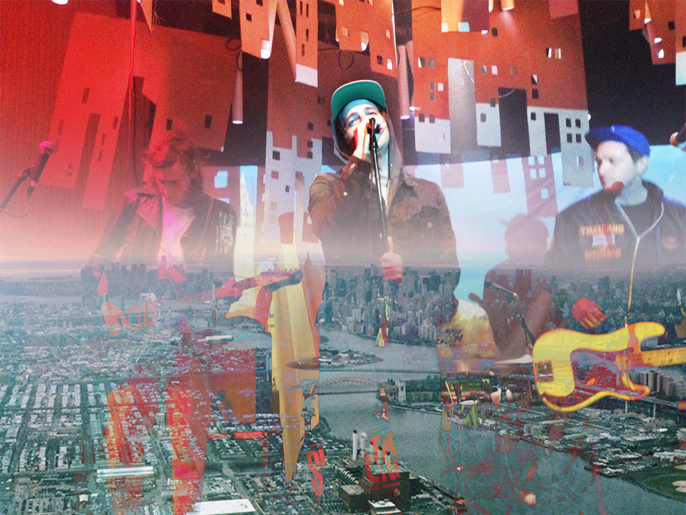 In Manhattan, SKATERS draws from sounds as diverse as New York City itself. The highly anticipated 11-track album squeaks and squeals in just the right ways (“Deadbolt”), adopts tropic vibes (“Bandbreaker”), emits a California surf-pop effervescence (“I Wanna Dance (But I Don’t Know How)”), and rages with 70s-era LES punk hyperactivity (“Nice Hat”). All of these genres are filtered through SKATERS’ trademark voice, marked by glittery pop hooks and thrashing punk choruses. Frontman Cummings took some time out to chat with Pretext and share a few stories from SKATERS’ rise to recognition.

MADGE: What were your goals going into this record?

CUMMINGS: I’m really happy with the record; I’ll start with that. We had a lot of specific ideas about how we wanted it to sound, and one of the main things was we didn’t want it to sound too old and avoided old techniques. We actually wanted to incorporate more of a modern production aesthetic, which is why we wanted to work with John Hill. He’s done a lot of hip-hop records, and his beats are new and fresh feeling production-wise. We wanted to bring that aesthetic to a rock record and have a lot of low-end, a lot of bass. We used really ghetto sounds with really produced sounds to get a familiar enough feeling, but it doesn’t sound like a pop record that is super produced. With each sound we went through part-by-part — focused on each tone and made sure it sounded relevant and familiar at the same time.

MADGE: Were there any stand-out pieces of gear that defined the sound of Manhattan?

CUMMINGS: There’s a couple of things. We took a break and walked from Electric Lady Studios to Matt Umanov Guitars where I bought this Ampeg tube amp. I saw it and played it and it had this crazy delay built-in, so I ended up using that — anything that had a stabbing delay sound. The amp actually had my name engraved on it! Someone else had owned it with the name Michael and it was engraved on the plastic guard for the tubes. Also surprisingly, we ended up putting crazy stuff through this old flanger rack that belonged to the studio.

MADGE: What was used to get the guitar tone on “Deadbolt”?

CUMMINGS: Want to hear something really crazy about that? So the pedal that Josh used to get that sound is called Pink Ballz. It’s a pink pedal, looks kind of like a big muff but it’s all neon pink, and he uses this pedal live all the time. I was asking this friend of mine for a guy who builds custom pedal boards, and he sent me to the guy who makes that pedal! Turns out he lives in the apartment below me in New York! So I’m going to try and befriend that guy.

CUMMINGS: The Drowners. When we were making the record, we were listening to 70s punk stuff and 80s punk — XTC, The Ramones for certain drum sounds, and Television for certain guitar sounds. Generally I listen to anything and everything.

MADGE: What’s the story behind the name SKATERS?

CUMMINGS: You know what it is, we’ve all been in other bands and we all used to skate when we were kids. I thought of the band name because it was an appreciation for that feeling when you were a kid. That time when you would go out and you wanted to do nothing but fuck off all day and there was no anticipation, no expectation but to have a good time — it was your escape. We wanted this band to be that. We didn’t want to focus on a lot of the things that bands get tied up on. We just wanted to make fun, fast music that we would have listened to skating around.

CUMMINGS: There are a couple pinnacle shows. Actually, there are three — no, there are four. The first one was at Mercury Lounge. We sold it out. There was this line — they had to turn away 250 people, and we were kind of like, “holy shit.” I thought that show wasn’t that good, but it was the fist time we realized people were going to come see our band — that people were into it. The next one was the show we played at Webster Studio the night of our [Yonks] zine release. It was completely slammed — full of my favorite people in New York. Aka it had the best energy. That show was beat by the Bowery Ballroom show this summer. Selling out Bowery Ballroom was a big deal. We had been trying to do that since we started the band. We were always saying, “When can we play Bowery.” And it was a super big deal for us. Oh, and the last one was in London. We played a show at the Purple Turtle and no one wanted us to play it. So we booked it ourselves, because they were going to pay us good money, and we just did it and it was crazy! The kids who came out knew ALL the words to all the songs, and we didn’t even have the record out. That show was another big moment when we recognized people were listening.

MADGE: What do you think it is about SKATERS that’s propelling you guys to recognition so fast?

CUMMINGS: I think we learned a lot of mistakes that you can make in bands, having all come from other projects. A lot of things that people focus on too much and the things you don’t focus on enough. Such as shows you shouldn’t play. Not because they won’t be good, but because its not the thing. When you play a show, make sure everyone comes to this one event and it’s your night, and always headline every show that you play. We avoided opening for anyone when we were starting. We wanted to make it a point to not open for people because it was more meaningful, and we knew who was coming to see us. It’s also important to not be a band you could catch every week. I made that mistake in other bands. And when people feel like they can see you anytime, they don’t really make an effort. You got to make it special for people. Making a show the thing to be at has a lot to do with the bands you play with and doing interesting things at your shows like releasing the zines or having new or limited edition merchandise. All of it makes it exciting for fans to show up.

MADGE: What’s been the worst show?

CUMMINGS: We played this place Littlefield in Brooklyn. The headlining band didn’t show up ‘till we were supposed to play, and they didn’t bring anything — wanted to borrow our shit. We played one song and an amp blew up. No one showed up because it was supposed to be at another venue, and they moved it to this venue, so no one was there. We just walked off stage and were like, “fuck this, this is bullshit.” No one did their job promoting the show, including the headlining band, and so we were like, “Why are we going to look bad for these people?” They were playing with one amp. Yeah, that was the worst show.

MADGE: What are you looking forward to with the band now?

CUMMINGS: We’re doing a tour with Drowners; they’re coming with us on our headlining UK tour. All those guys — we’ve known them since before Drowners was around, and we started right before they did. Matt [Hitt] from Drowners used to play guitar in SKATERS, so we’re all super tight.

MADGE: Tell me about your first UK trip. What’s the story?

CUMMINGS: Ink hadn’t really dried on the Warner Brothers deal and we were trying to convince them to send us to the UK. We recorded the EP before anything — in my house. Then Sara Cox at [BBC] Radio 1 played it in the middle of the day, and that was kind of a big deal over there. We were pretty much an unsigned band getting played on Radio 1. So we said to the label, “Listen just pay for us to go over there, and you’ll see it’ll be good.” They didn’t want to do it initially, but we convinced them. They basically said, “Alright, it’s your fuck up if it doesn’t work out well.” But it did; we sold out our first show, and it was a really awesome feeling. We added another show and it sold out, so we added a third one and that sold out as well! Then we knew that the UK was going be a good spot for us.

MADGE: Any parting words to fans?

CUMMINGS: We’re just really thankful and appreciate the spot we’ve gotten ourselves into. I just really want people to hear the record, and I hope they share it with their friends. Oh, but the song “Done For Good,” we get asked why it’s not on the record quite a bit, and we’re going to try and release it separately.

CUMMINGS: “Bandbreaker.” Just because it’s totally different than anything else on the record.

MADGE: And your favorite song to play live?

CUMMINGS: “Miss Teen Mass.” People really respond to that one.

—
SKATERS debut album Manhattan is available Feb. 25, 2014 in US/CA, Feb. 24, 2014 in UK on iTunes. See them tonight in NYC at Bowery Ballroom and check out their official site for upcoming shows.