Listening to Flagland is like trying to steer a ship on manic depressive waters: you teeter on soft, delicate melodies then without warning, slam into thunder-crashing, sorrowful noise. The sharp transition is enough to make you feel seasick. This balance between sorrow and sunshine is met with lyrics that border on cries for help, making Flagland’s music perfect therapy for the pessimistic optimist. Not to mention, they have a new album Love Hard on Father/Daughter Records (with its third single “Monster” just released on Impose today), a 7″ split with Big Ups, and the album Tireda Fightin, so you can happily listen to them without repeats for hoursssss.

I first happened upon Flagland when they opened for California X, Perfect Pussy, & Yvette at Shea Stadium a few months ago, and they were a delightfully unexpected surprise. So when I heard last minute that they were playing at The Flat, I couldn’t resist racing over to get what footage I could with only a maxed out iPhone. (Maxed out because I refuse to be denied the ability to listen to Beyoncé’s “Grown Woman” and “Yoncé,” so I am out a gig until she releases the non-video versions.) Flagland is incredible to listen to whether with a packed house or an intimate gathering on a Thursday evening. Frontman Kerry Kallberg sings and plays guitar with reckoning force and intensity, bassist Dan Francia charmingly giggles to himself while effortlessly laying down intricate bass lines, and drummer Nick Dooley holds it all together with beats to go nuts over. Although melodic, they don’t invite a bop but rather a self-soothing sway reminiscent of the dance moves induced by early 90s grunge-angst bands. 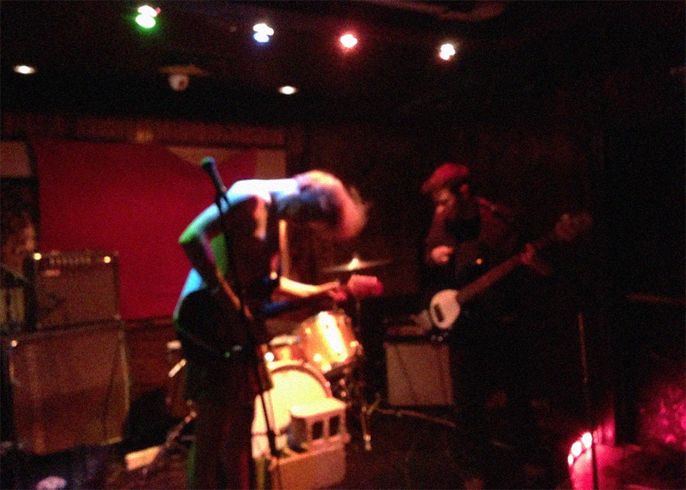