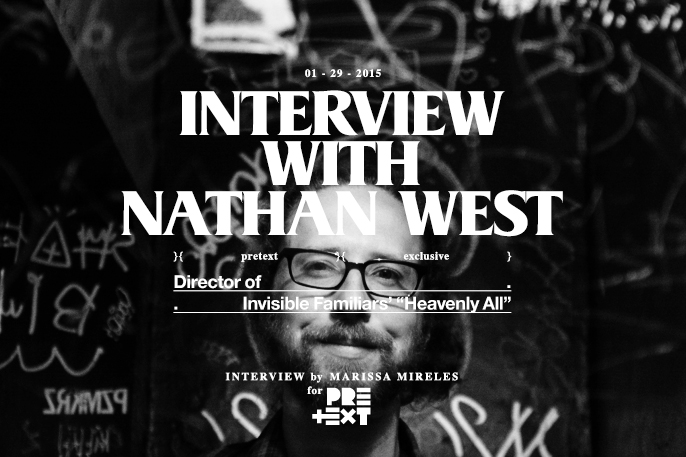 The brilliant photographer Nathan West recently made his directorial debut with the premiere of Invisible Familiars’ “Heavenly All,” an unmistakable gem off the band’s debut album, Disturbing Wildlife, released January 27, 2015 on Other Music Recording Company. The visual portrayal of “Heavenly All” showcases many of the rogue director’s talents making for a super understated, ingenious video. In Pretext Social Club’s exclusive interview, West shares insider details that provide an insightful look at his first-time directing.

Interview by Marissa Mireles. Photos by Nathan West, courtesy of the photographer.
—

Tell us a little about your creative life and how you ended up creating a video for Invisible Familiars.

WEST: I started trying my hand at photography when I was a teen, mostly just slouching around the south taking wretched pics of graveyards, construction equipment, and my friends with a Pentax my dad had lying around. I kept shooting as a hobby, but chose to pursue theatre in college. After graduating and making the obligatory move to New York, I got a temp job working with the New York Road Runners as an assistant to the assistant handling the higher ups there as they prepared for the yearly marathon. I approached the art director of their creative department about letting me try and shoot a few races, and despite probably the worst portfolio to ever cross her desk she gave me a chance and I started shooting races. That relationship was fun but eventually ran its course, so I managed to wrangle my way with help from a kind hearted ex-girlfriend into working for Law & Order, where I got a crash course in film and television production over a 4-year period. I met Jared Samuel of Invisible Familiars through a wild old roommate of his at a random Thursday night party that ended up back at their old place, a single story church that was converted into a performance/practice/living space. I drunkenly persuaded him into letting me take a quick portrait, he didn’t hate it, and we’ve been working together since. When he got this album together, he broached the idea of having me do a video for one of the songs. I really liked the track “Heavenly All,” so we went from there.

What is the best thing about photography for you and how have you translated that into filmmaking?

WEST: The majority of my work is portraiture, and an aspect of that which I think might be the “best” thing about photography for me is the ability and opportunity to really look at someone. I don’t think that happens enough in general life. For the video, I quite literally tried to take what I do with my portraits and set it to motion, which was an interesting technical challenge.

Was there anything you were not expecting that you encountered during the production? What did you do?

WEST: Well, it was my first real stab at a moving visual piece, so there were certainly a few hiccups. We shot the raw footage across three camera systems, two types of DSLR’s and a Sony HD cam for the slow motion effects, so that was a little odd. One of the cameras, mine embarrassingly enough, had some issues so there was that. Lighting for green screen is no walk in the park either, so there was a learning period with that as well. You just have to compensate if possible and improvise if not.

How did the idea for the video come about?

WEST: Jared and I talked quite a bit beforehand about things we like and don’t in music videos; my general concept was that I wanted a straight-forward performance piece that had no real narrative and I wanted it aesthetically to borrow heavily from the portrait work I do, and he thought that would be fun. We talked a great deal, both before and after the principle shooting, about the role of effects and how those were going to be incorporated. In that way Jared and Will Kitchings, the extremely talented editor and VFX gentleman who did post on the video, were great sounding boards as we hashed out an aesthetic language we all felt good about.

What is up with the phone motif?

WEST: Early on we got attached to the idea of absurd, non-real instruments as a way to pleasantly twist the performance aspect of the video into something a little weirder. Jared sourced those and the telephone as mic was one. There’s imagery in the song that dovetailed nicely with the phone feel, and I always liked the suggestion that in this case, the music was sort of coming through the electronic ether out to the viewer. Trying to connect.

What other projects are in the works?

WEST: Mostly hustling out there for new portrait projects, I’ve been developing a subway series and general street body of work, and a long, long, long overdue website update.

Who are some of your favorite artists?

What is your intention when creating works of art?

WEST: As much of what I’m doing currently involves other people; my intention is to do them justice. 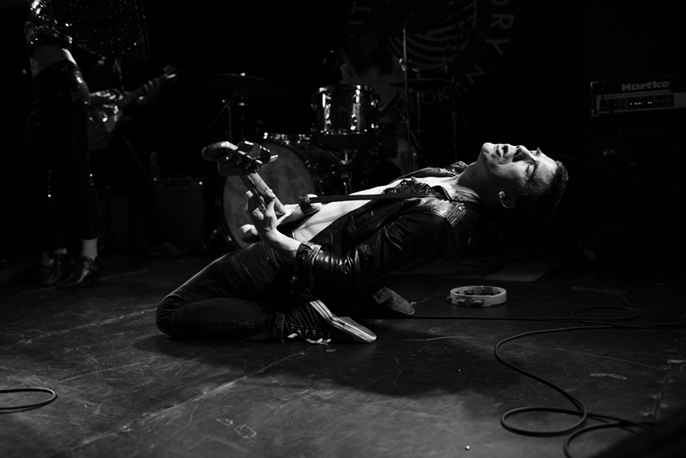 Where is the best place to think and create for you?

WEST: I think best on the subway, create best in the studio.

As a child did you know this was what you wanted to do?

WEST: I think my childhood career ambitions, in order, were: F-14 fighter pilot (too blind), ninja (obvious logistical/time-space issues), and then actor before settling on photographer.

In the future where do you see yourself?

WEST: Some days I see myself having beers with friends in a moderately sized above-ground apartment proudly showing prints from a recent shoot with Bjork or contemplating life’s charming absurdities from a plane on the way to a decent commercial gig in Roppongi. Other days I see myself bent and old on the subway muttering about the glory days of photography while taking snaps no one ever looks at. But that’s a bit silly—there’s no way I’ll be able to afford rent here when I’m old.

Any directing in your future?

WEST: Possibly—in really early talks about a video for a great band called the The Majorleans, we’ll see how that pans out. 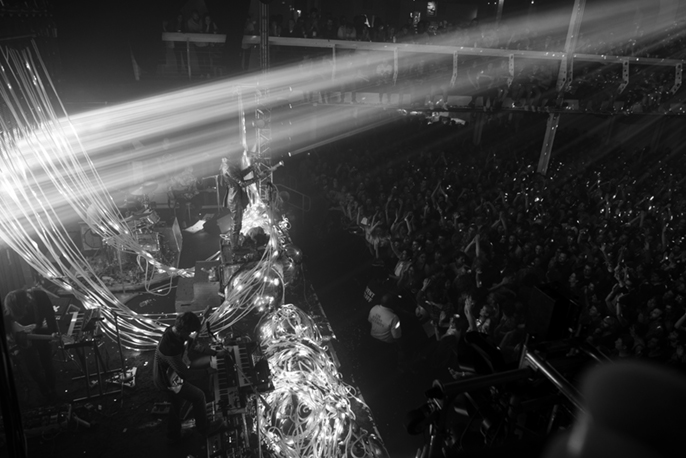 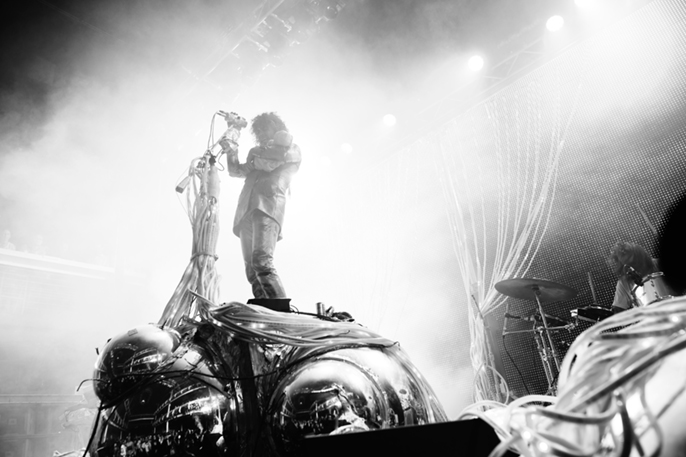 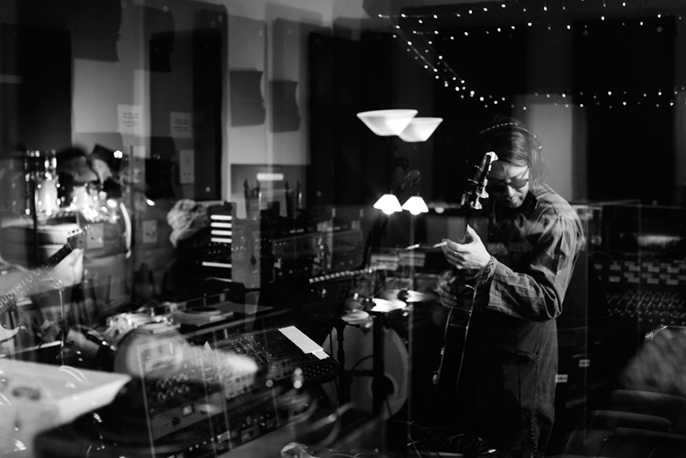 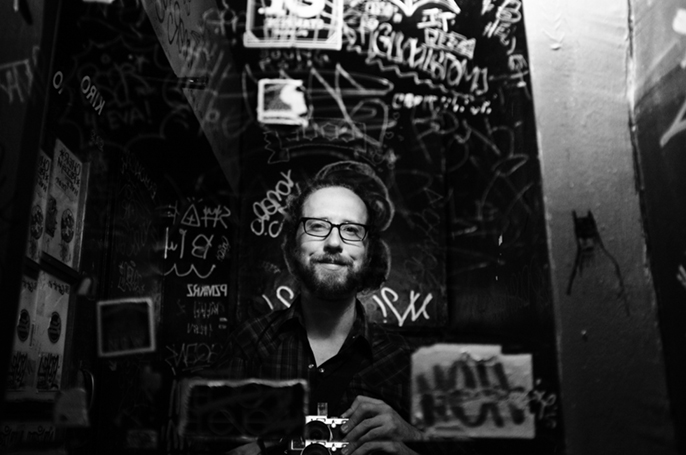