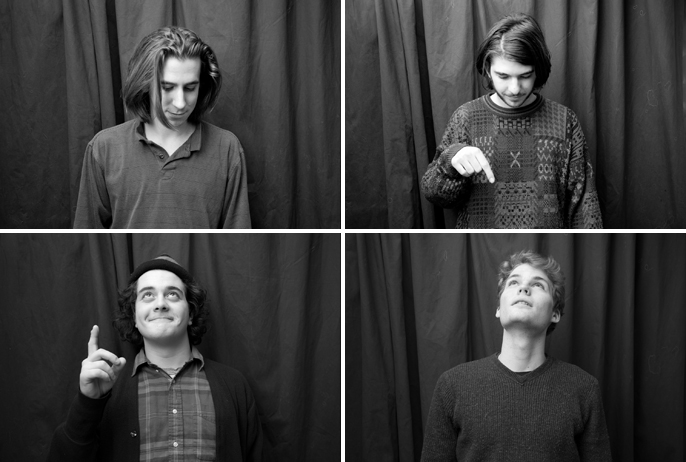 The Districts are Robby Grote (Guitar/Vocals), Mark Larson (Guitar), Connor Jacobus (Bass), and Braden Lawrence (Percussion). They play devastatingly passionate folk, blues, and Americana. They are incredibly prolific, and were recently signed to Fat Possum Records. None of them have turned twenty yet, but that’s not important. What’s important is how much they fucking rock.

They’ve been my favorite new band for the past several months. I’ve drunk my sorrows away to their music, listened to it on repeat for days, been inspired by it, and regained faith in this generation of music by it. Needless to say, I was tremendously excited for the opportunity interview them. I brought them all Reese’s Peanut Butter Cups to thank them for sitting down with me, which they promptly devoured before my first question. We’re best friends now. Read the interview here. 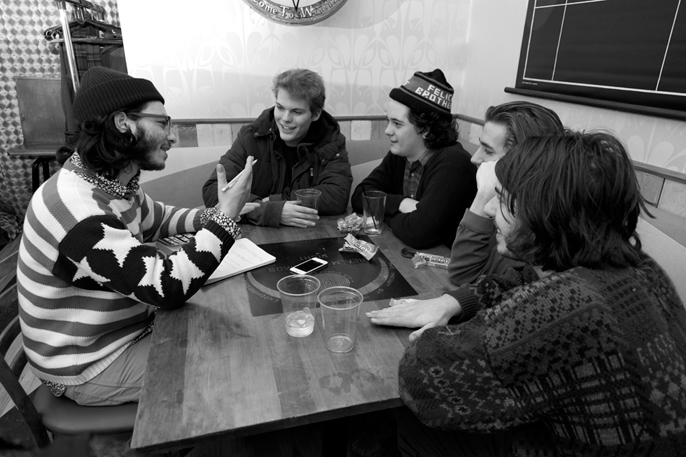 Interview by Adam Ouriel at Baby’s All Right before The Districts’ EP Release Party.

Thanks so much for sitting down with me! Let’s get to it. I’ve checked out your touring schedule for the next year, and it seems like a doozy. What’s it like spending a lot of time on the road together? How do you get around?

GROTE: Everyone gets their own bench and then there’s two people in the front.

OURIEL: How did you guys do laundry?

GROTE: I re-wore pants a lot. I think I brought enough shirts… nah I probably didn’t.

OURIEL: So which District is the smelliest District?

All but GROTE: Robby. You sweat a lot.

GROTE: But I don’t have the stinkiest sweat! I’m gonna vote that Mark’s the smelliest–not because of his body odor but because…like don’t put in the interview that it’s a fart but…

OURIEL: Well, now I kind of have to! But, you guys met in high school yeah? What kinds of shows did you play back then?

JACOBUS: We started meeting other bands and they helped us get different shows.

LARSON: We played house shows in Philly, and then you work your way up playing small shows there, and small venues in New York.

How long does it take you compose your own songs? Take me behind the process.

LARSON: There are two main phases. The first phase is just… Robby. And the second phase is The Districts.

GROTE: It could be a couple of days, revisiting it, or even a few weeks. Sometimes I’ll have a poem that I wrote a while ago, and it’ll be like “Oh! These work!” and then I’ll write a guitar part. Sometimes it’ll happen in like a half-hour, but it’s not predictable. But we’ll have to come together and figure out the dynamics and it’s never the same as it started. There’s a metamorphosis.

LARSON: I’d say anywhere from one day to several weeks.

GROTE: Any time it takes that long though, if we play a song live and it sucks, or try to figure something out for a while and it sounds bad, I’ll get in a really bad mood. We’ll just say “fuck this” and not really come back to it. We don’t follow “No Child Left Behind.”

On that topic, do you prefer the songwriting process or playing live shows?

LARSON: It’s really fun when the songwriting process goes smoothly, and when you finish the song it’s such an awesome feeling. But there are times when we don’t know what to do.

GROTE: That’s usually the child that gets left behind.

If The Districts were contestants on a reality TV show, which one would it be and why?

LAWRENCE: Fear Factor!
GROTE: Aw man, are you kidding me?

LARSON: Wait, can we go on…what is it, Knockout? Wipeout! The obstacle course one.

GROTE: If The Districts got the chance to go on a reality TV show, they would spend too much time fighting over which reality TV show they should really be on and never end up winning a prize. 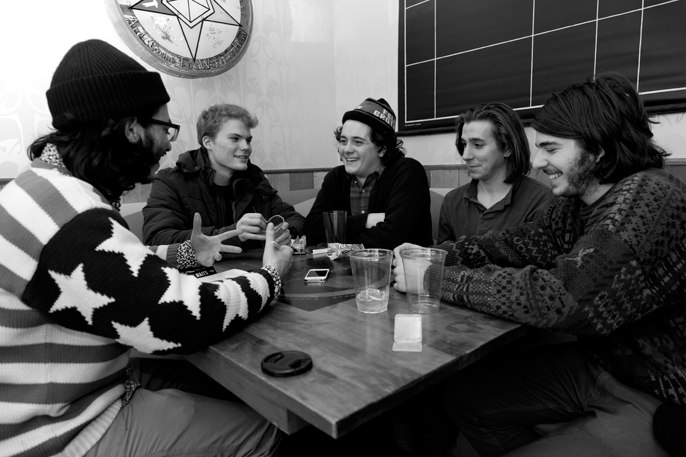 So, if The Districts have some lady friends over and are trying to get lucky, what’s on the playlist?

LARSON: Beyoncé. Have you heard her new songs? The lyrics, oh man!

GROTE: I’ve been reading articles on her lyrics, my favorite one is [picks up mic recording interview and sings] “Driver roll up the partition please, don’t want you seein’ ‘Yonce on her knees!”

Which musician inspired you to start playing your instruments?

JACOBUS: Me and my brothers grew up on Tom Petty, that was the earliest musical memory I have, listening to him. And both my brothers play guitar, so that made wanna play too.

LAWRENCE: My mom wanted me to play an instrument, and I chose guitar. But I got bored of that, and I saw The Killers on MTV and for some reason I saw the drummer and I thought “Oh, that looks fuckin’ awesome!” And after that I wanted to play drums.

GROTE: I had a really weird musical taste for 4th and 5th grade of loving like Eric Clapton and then my step-sister was super into punk rock so I listened to The New York Dolls all the time in elementary school. So a combination of Eric Clapton and Johnny Thunders or something… and like… Pearl Jam.

One artist we share a mutual affinity for is Tom Waits. Do you have a favorite album or song of his?

LAWRENCE: The Heart of Saturday Night is really cool.

GROTE: I’m torn between Rain Dogs and The Heart of Saturday Night. Which are both very different Tom Waits. [to Lawrence] You showed me “New Coat of Paint,” and I was like “What the fuck? This is Tom Waits?”

OURIEL: I actually almost got a tattoo of a lyric from that song! “Fishing for a good time starts with throwing in your line”

LARSON: After the show, let’s all get Tom Waits tattoos!

OURIEL: Yes! Awesome. Ok let’s try some “would you rather’s”…

GROTE: This is a good interview! Wait, what time is it? Do you have a piece of paper? We need to make a set list. [starts making set list]

Would you rather make a hit record or be the inspiration for one?

THE DISTRICTS: Ooh… be the inspiration.

Would you rather be Justin Bieber, or be married to him? You’d have to be a girl…

GROTE: Oh, come on! Marry him? I could take all his money and cheat on him all the time.

LAWRENCE: That sounds okay… wait, but then I’d be a girl!

LARSON: Would we have to behave like Justin Bieber?

Robby, this one is for you. Your lyrics call on some very powerful imagery, especially when you’re talking about love, and your attitude towards love is pretty heavy handed on the whole. I have to ask — are you prone to heartbreak?

GROTE: Uh, yes and no? I have a girlfriend and we’ve been together for quite a while. There’s been heartbreak too… I’m trying to think of how to explain it. I’m prone to heartbreak maybe cause I’m just too sensitive?

You guys have a unique sound even though it touches on familiar territory. One way I’ve tried to describe it is “grungy white boy blues.” Does that make you angry or is it accurate?

LARSON: We never really planned for where it went. We just listened to what we like, and it kinda just followed its only path.

GROTE: It’s best to let it go where it goes and figure out what it is afterwards. 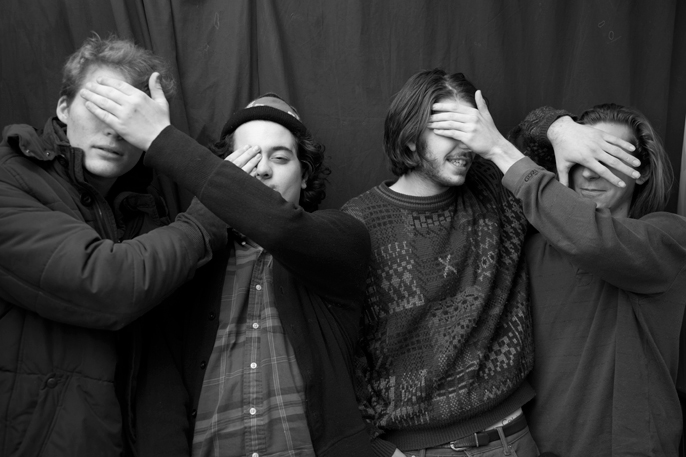 What’s one question you wish I would’ve asked?

GROTE: Is that how you improve your interviews? Haha… I guess why is Mark so ugly?

JACOBUS: Why do Reese’s Cups taste so good?

OURIEL: Why do Reese’s Cups taste so good?

LARSON: The combination of peanut butter and chocolate mixed together with the orange wrapper! It’s perfect!

More on the band: https://www.facebook.com/thedistrictsband