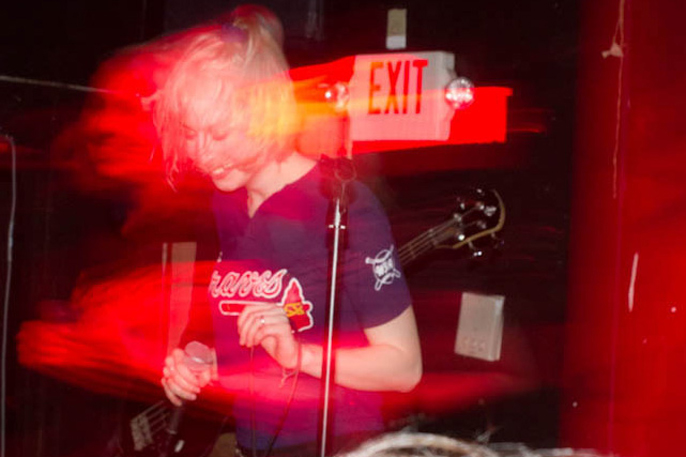 When great music, raw charisma, and dancing your ass off goes out of style — someone, please call me. Until then, you can find me jumping around wildly at a Charly Bliss show.

On the evening of January 12, I could be found doing so at the grimily charming Williamsburg bar known as Muchmore’s. The venue’s hole-in-the-wall feel caters to quiet folksy sets and thrashing punk ones alike. On this past Sunday night it was assuredly the latter.

If you live in New York City and haven’t tragically gone deaf within the past year, you might’ve noticed that our city’s music scene is amidst a major female-fronted pop-punk revival. But I can assure you that if you’ve still got your hearing, and especially if you haven’t, you have not heard or experienced anything like this exciting quartet. Composed of sibling duo Sam and Eva Hendricks on drums and lead vocals respectively, guitarist Spencer Fox, and bassist Kevin Copeland, the Westport, Connecticut export packs the biting punch of a vindictive and precocious tween raised on the Foo Fighters, Pixies, and Violent Femmes, when Sweet’s “Ballroom Blitz” and Paramore weren’t being played on repeat. They play the kind of pretension-free, ball blitzing music that gets you so worked up you’re all but forced to hop and bop along until you’re nothing but a pool of sweat. 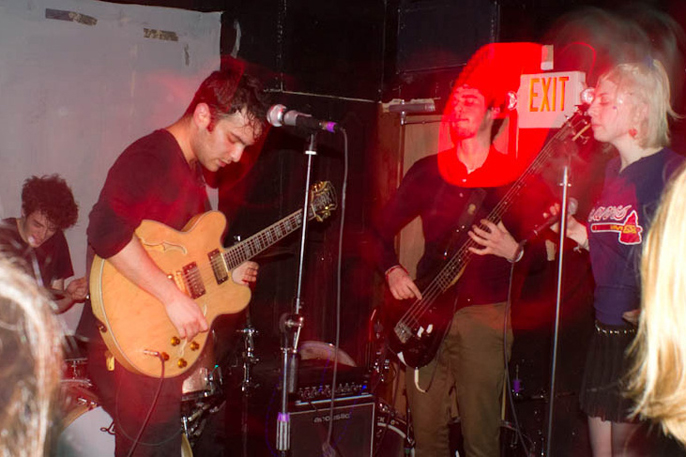 Some of the audience at Muchmore’s were clearly a part of the uninitiated, and were either too ashamed or perhaps too overcome by the whooshing punch of Charly Bliss’ music to dance their asses off along with me. But not to worry, the rhythm section packed enough punch to compensate for any pulses that needed jumpstarting. Drummer iteration of Hendricks plays hard-hitting, rapid-fire, fill-heavy drums that are a must for any band claiming an ‘80s or ‘90s punk heritage. An attempt to cite specific examples of his prowess would be an exercise in futility. The booming presence of Hendricks’ drums is omnipotent and he goes off at least twice in every song. He does so with such little effort it’d make even Taylor Hawkins blush.

Mr. Hendricks is accompanied by bassist Kevin Copeland, who for some inexplicable reason is featured only very sporadically. But he seizes those few opportunities brilliantly, such as in the chorus of their brilliant re-imagining of Blondie’s “Heart of Glass.” Copeland plays a series of funky ascending arpeggios that put a HUGE smile across my face — which of course, no one at the show could notice because I was flailing uncontrollably (“dancing”). 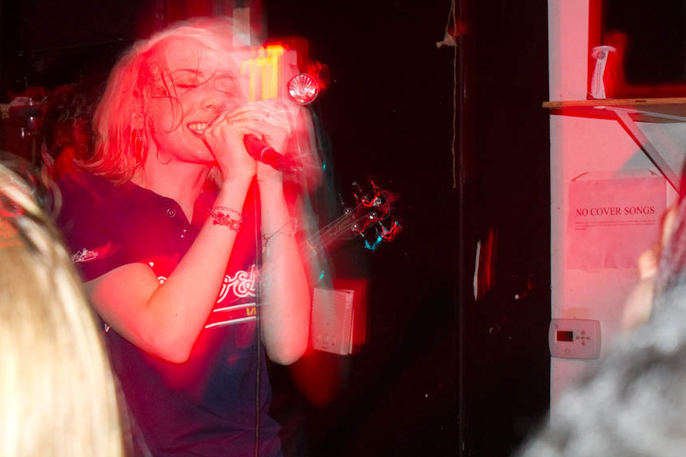 Some of the audience at Muchmore’s were a part of the uninitiated and unable to match my giddy, dancey enthusiasm. But not to worry. GuitarFox had the finger-licking chops to compensate for any corner of the room yet to be electrified. GuitarFox is an understated powerhouse. Not only does he share vocal duties with SingerHendricks, he also taps into a subtle a genre walkabout. He sprinkles in airy, reverb-heavy guitar riffs with the prerequisite angry power chords that distinguish the band from their punky counterparts. It’s what allows them to mix the aforementioned bratty punk wünderchild vibe (“Clean”) with a loose bust-out-your-dancing-shoes-and-disco-bump-til-you-can’t-disco-bump-no-more feel (“Friends,” Blondie’s “Heart of Glass”) that makes you dance even harder.

Some of the audience at Muchmore’s were a part of the uninitiated and had not packed their dancing shoes in advance, which brings us to LeadvoxHendricks, Eva, who packed enough unadulterated vibrancy to go twelve rounds in the ring against a powder keg — if only the powder keg could keep up.

Or, in not as many words: wow.

I mean, wow. Can I slant those italics any further? No? Damn. 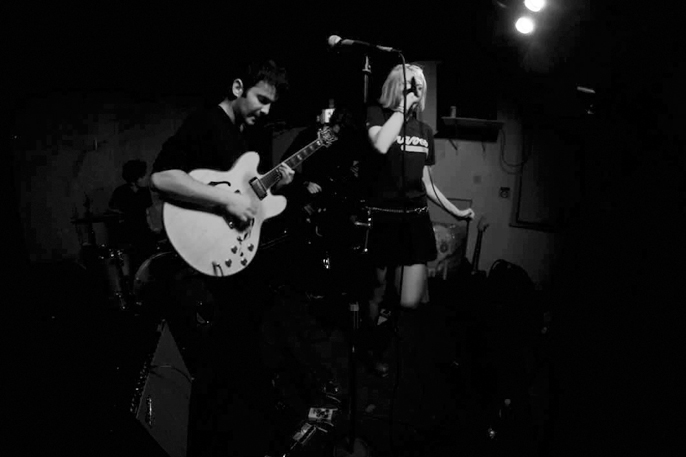 I have rarely, if ever, seen such an inviting and commanding stage presence in such a young talent. I concede, the girl most likely learned to dance by watching fishes flop around on dry land, fighting for their lives. But unlike her teachers, when Eva flops, it’s so flopping cool. It’s one of the many dissonant paradoxes that somehow coexist within the magical aura that is Eva Grace Hendricks. Her stage presence is at once raw and punky, but is equally refined and rehearsed. She channels the wrath of a heartbroken teenybopper while concurrently unleashing the terror of a reckless ladybeast. She sincerely thanks the audience for their participation but will just as quickly yell them into dancing more. But never mind performance antics — that voice! What a voice! For the first time in my budding music journalism career, I might genuinely be stumped. It’s emotional and expressive, but highly controlled. She’s screaming at one point, and then stops on a dime. She simultaneously belts and coos, not one then the other, which is difficult to imagine, but unforgettable when you hear it. And in spite of all this raw energy, her voice is so polished that when she opens her mouth she emits what sounds like a produced, pre-recorded studio track. I mean, seriously — what the hell?

These collective polarities enable her to act as the perfect medium for the band’s Jekyll and Hyde personality. It should come as no surprise, then, that Eva is the personification of lady balls. She plays equal parts passionate, angry, sensual, innocent, beckoning, and dismissive. Her entrancing punkbrat allure is eclipsed only by a wildly contagious enthusiasm so striking it’s almost alarming. I stopped dancing only when I was temporarily hypnotized by her passion, her aforementioned goofball dance moves, or omnipresent stankface (the face you get when music is so good, your faces strikes an expression resembling one you would assume if you smelled something stanky. Google it.) 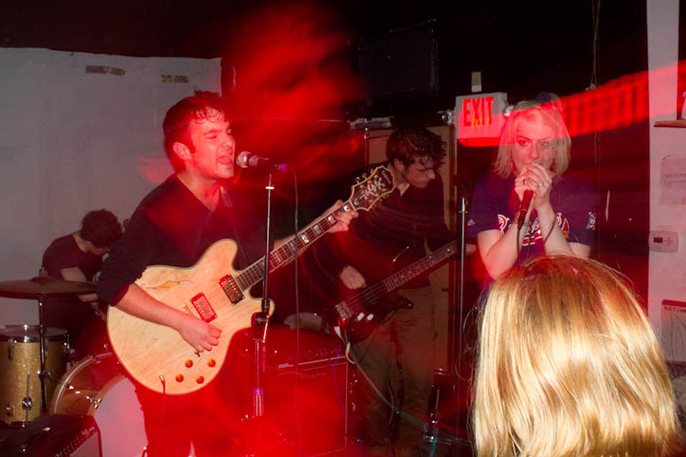 The musical personalities of voxHendricks and her band of punkboy misfits ultimately coalesced perfectly in a thirty-minute set of trim high-voltage bangers.Their high-intensity sound, siblings Hendricks revealed during a brief exchange, is a relatively new one. This is evident at certain times in their music, and their rendition of “Heart of Glass” is likely still their most compelling work. But the most recent addition to the band’s repertoire, a new single entitled “Clean,” is driven by a more delicately crafted power than most of their older material, and played with brilliant urgency. Even better is an unreleased song, “Love Me,” with which they closed their set. Thumping drums and shrill guitar intro leads into bass-heavy verses that roll back in a sentimental sounding bridge, only to explode into a chorus that slams you with hard-hitting chords pulled away for a beat of silence—enough space for one head-bang — before roaring back with an even more powerful noise explosion. The chorus is punctuated by charmingly bitter hooks like, “And you love me, and you love me… just a little less,” a perfect example of the band’s coy but bitter romanticism.

Charly Bliss’ songwriting, live performance, and general aesthetic development all signal the imminent fulfillment of undoubtedly tremendous potential. That this band can still grow so much is quite a scary thought, and I am very confident that in due time they will become an increasingly bigger fish in an increasingly smaller pond (RIP Eva’s dance instructors ☹). As those who I’ve initiated — my friends of varying musical tastes, my parents, our own editor in chief J. Straw, brass at record labels — can all attest: Charly Bliss has that “something” special, for lack of a better phrase. 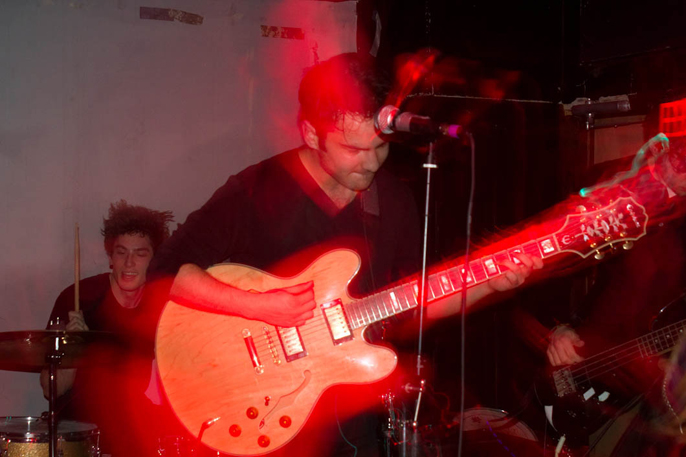 You can’t always necessarily quantify a band’s extra touch of fairy dust, but the appeal of Charly Bliss is obvious. They all have such a fucking good time playing their music that you can’t not be infected by the funbug. And while some of the uninitiated were yet to fully come down with the fever on the evening of January 12 at Muchmore’s — not to worry. The collective power of this young ensemble will stick with those newly initiated youngbloods and bring them out to many more shows until they’re all wildly ill with the (#)BlissBug.

It’s like I said: when great music, raw charisma, and dancing your ass off goes out of style — someone, please call me. Until then, you can find me flopping around wildly at a Charly Bliss show. I’ve already been to three, and I plan on attending a lot more.