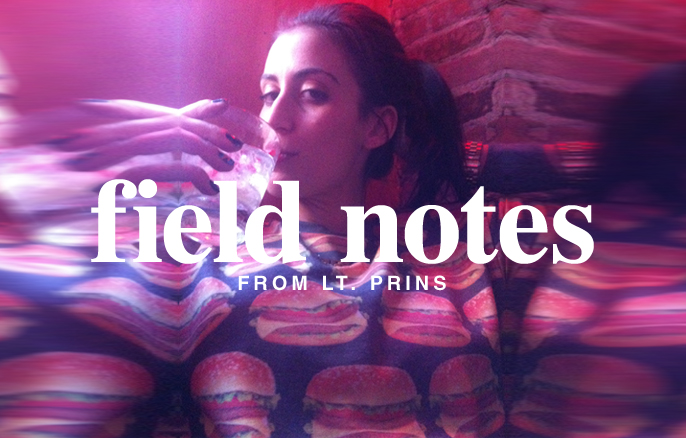 Saturday night Burger Records hosted a World Wide Revolution “all in the name of fun.” They called upon any groups associated with the label to represent on the frontlines, and cities ACROSS THE GLOBE erupted in venues, bars and apartments opening their doors to host. I happened to be in Brooklyn, New York, so I decided to check out Lolawolf, BOYTOY, Threats and Organs at Union Pool.

When I arrived, the small back room of Union Pool was dimly lit with chandeliers and the first band, Organs, was taking the stage. Colors projections whirled about the room courtesy Wartella M. Wartella as the band flipped on the amps.

With the first chord of bluesy NY-rock with hints of 70s Bowery scene and a little Greenwich Village via the harmonica microphone, this modest 3-piece blew us away.

The guitarist was making some BIG sounds come out of a very small Fender amp, while the bassist grooved along in a rock trance all his own. These were some moving songs — the kind that dropped you out and pulled you back like a runaway freight — loose enough to be fun but tight enough to be professional.

After their set we all spilled out into the courtyard for some fresh air and cigarettes. More people had started to show and talk about the not to be missed Threats set on the horizon.

We rushed back in a verse late to find ourselves admits the chaos of what I can only imagine to be the soundtrack of an apocalyptic skate party in the deep end of an abandoned pool at the end of the world. Threats sound is very tough, easy to get into but tough enough to scare off the weak at heart. Guitarist Jack was wildly animated but with precise delivery — I’ll put it this way, they got the neutron bomb on the East Coast. Wartella M. Wartella stepped up the improv game by shaking the oil lamps to make the projections more violent and reminiscent of a chemical outbreak. The impulse to go out and skate and destroy to their set was strong, but I couldn’t pull myself away. Tight, Fast, Mean. Well done.

By this time the venue was at mass capacity and there was a line around the block. I headed to the taco truck to gain some nourishment before the next set when I bumped into Alix Brown. I told her I missed seeing her play bass live with Golden Triangle, but she assured me she had a new project in mind for the future. Adam Green showed up in a greek fishing cap matching the one I was wearing and we chit-chatted, probably looking a bit like drunk sailors on leave.

A thundering chord was struck inside warning the patrons that BOYTOY had just taken the stage. The projections by his point had evolved to multiple levels of oil wheels spinning in different directions making the room appear as drunk as the people within. BOYTOY was jumping along to the beat of the party, and I thought the chandeliers would swing off the ceiling at any moment. Their sound is that of an elevated daydream of intoxication; teen angels singing over dream-rock bliss. I imagined them rehearsing in a garage somewhere in paradise. Tight drums with psych grooves got everyone moving and they closed the set with a cover that was so drenched in reverb I still have no idea what it was. Sounded great though. 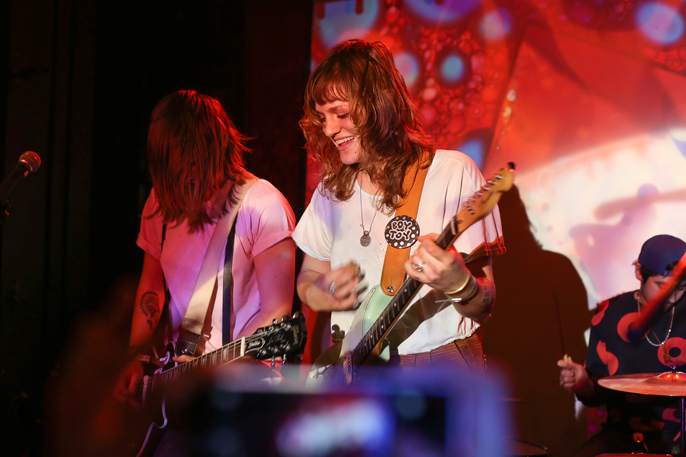 The crowd was catching their breath out back beneath the warmth of the Union Pool heat lamps that make everyone look like sexy demons in the best way. Once more sound erupted back inside, though I thought it might just be a DJ or an iPod. I was wrong. I walked in to the back to find two guys in matching Jordan jerseys playing trap music on an automated drum pad with some live (left-handed) bass. There was a girl singing on the track but no one on the stage. Then she appeared from the crowd with a ripped open shirt. “Hey, that’s what’s his names daughter!” The band was called Lolawolf and they were the first trap band I have ever seen. By this point Alix and I were loose enough to get into the groove and it was actually pretty fun. Wartella M. Wartella slowed the whirl to provide a more romantic atmosphere and I think it accomplished just that.

So in one night we ran the gamut of good bands all on the same stage. Well done, Burger. Looking forward to the next Revolution. 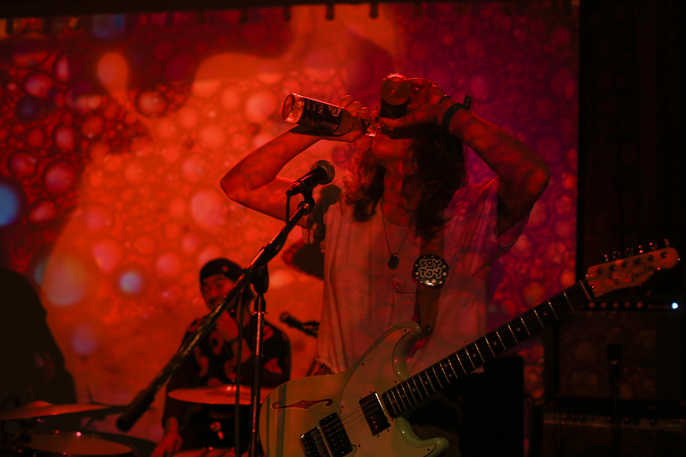 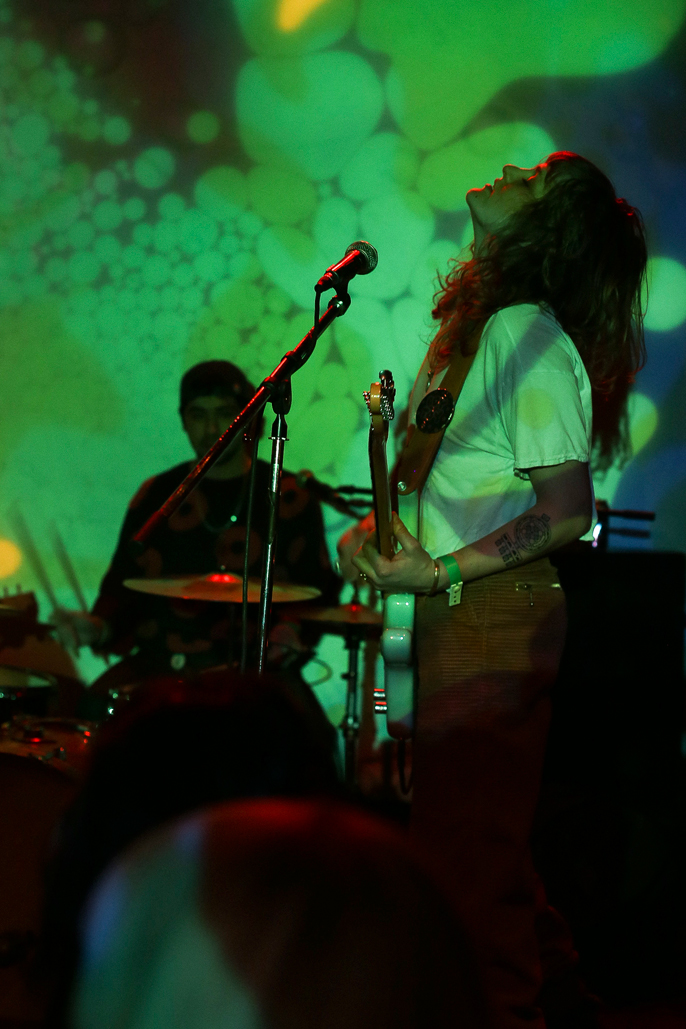 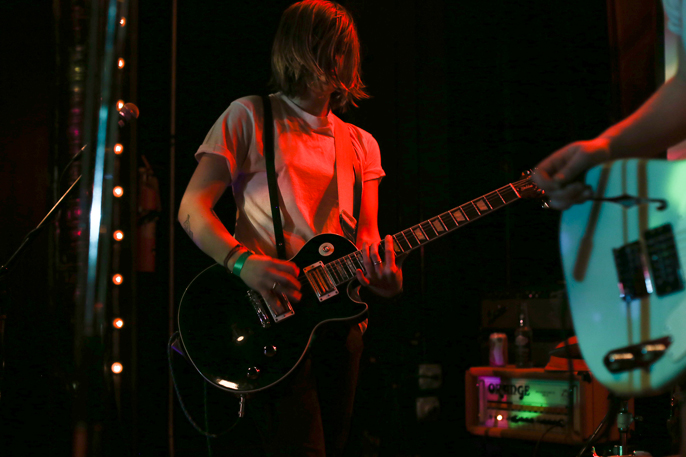 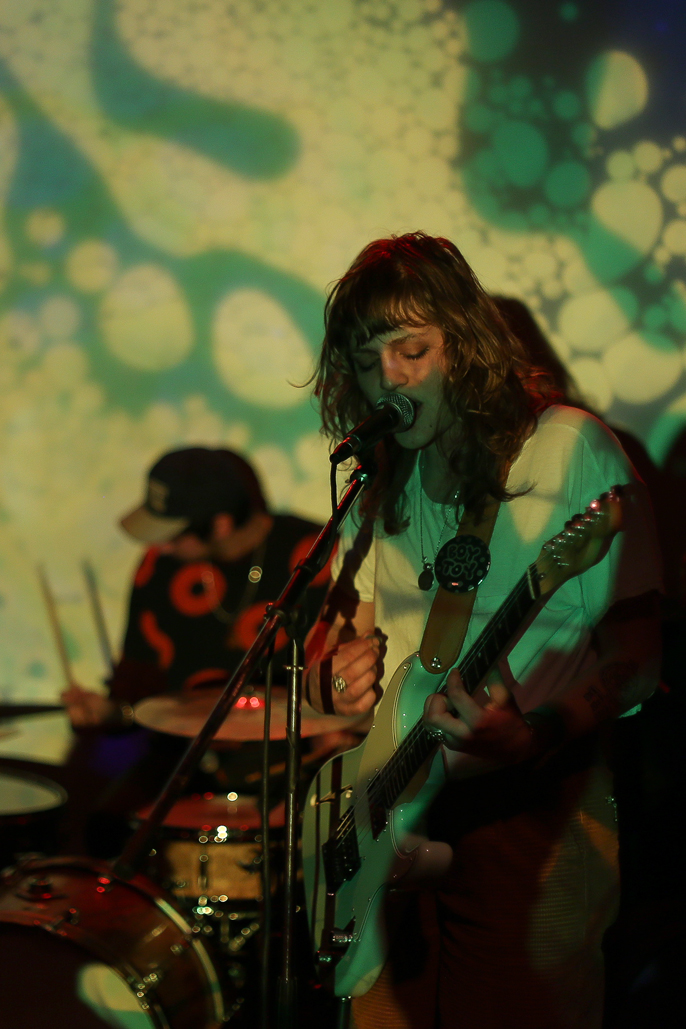 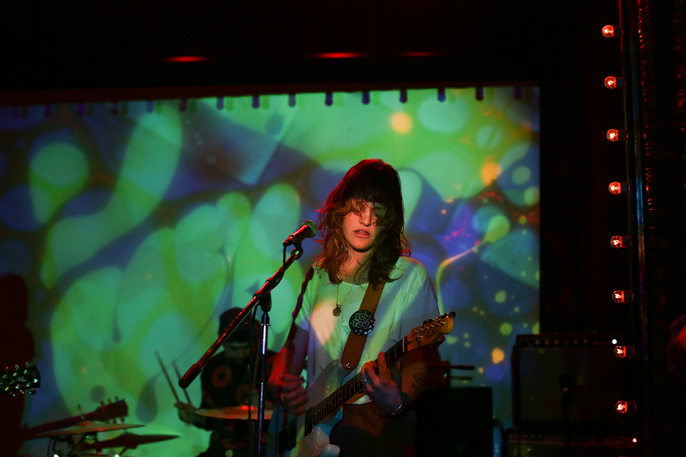