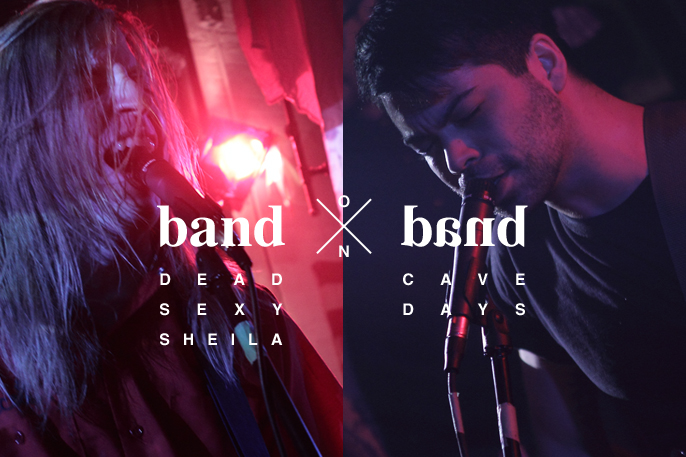 Best buds Scott Lechner of Dead Sexy Sheila (guitar/vox) and Jon Murphy of Cave Days (guitar/vox) recently shared a stage for Cave Days’ Memoriam EP release party at the appropriately named Hot 97.4 loft. They reviewed each other’s sets, providing Pretext with some unique and personal insights into their respective music like only good friends can.

Cave Days has been making gloomy tunes for Brooklyn since 2010. Since then the band has been a private institution for listeners who can relate to the true darkness and dim hopes of modern relationships, with sweet melodies and pop structures under the intuitive guise of oil refinery fuzz and cathedral echo. The lineup has gone through several changes since the groups inception by Jon Murphy (songwriter, vocals, guitars).

Their first self-titled EP in 2011 saw Jon working with talented synth-manipulating neighbor Erik Leubs, who added beats and electronic instrumentation to Jon’s picking and singing. After that Jon adopted a three-piece band, of which the only constant to this day has been Richard Thomas (bass, vocals). With changing drummers (they’re notoriously difficult to net around here), Murphy and Thomas recorded 4-song EP Memorium with late producer Jim Bentley. They put it out themselves onto ten-inch records, and brought a few boxes to their album release show at the artfully seedy tower loft venue Hot 97.4 in Bushwick. 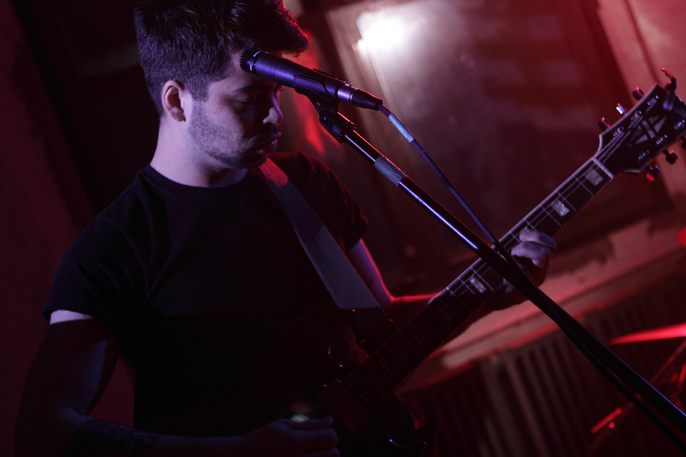 Cave Days set up after midnight. As backdrop to the makeshift stage, the tall windows had begun to haze out the twinkling skyline with the heat coming off of the crowd, shoulder to shoulder, and still trickling in. A muddy jangle of sad, distorted chords churned out of the PA while Thomas and Murphy adjusted mic stands and plugged in effects pedals. The intro had a leading effect. A few of the kids — stone drunk (some shirtless) — who had just been moshing to the previous band now let their eyes unfocus in a diet trance. Cave Days opted for a drum machine this gig, and as it turned up, Murphy and Thomas took us for a swim. 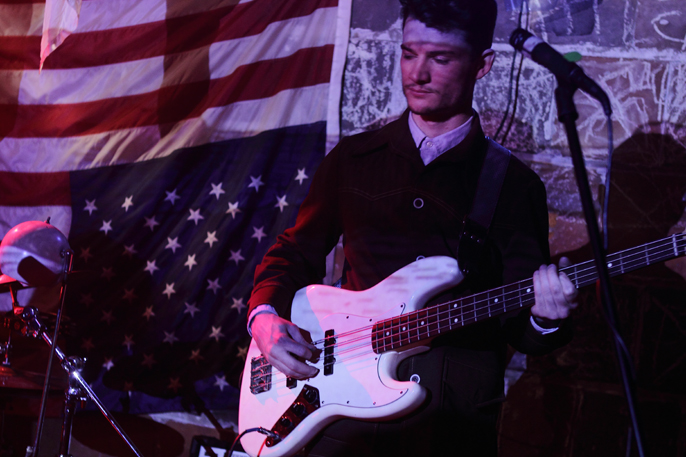 The machine beats sounded a little filthy in the reverberant concrete of the room but to great effect. The dirt helped them cut through and made people feel like dancing. Murphy put out luscious electric swells, deftly plucking at pedals on the floor (a child of Gaze), while Thomas never ceased his role as a totem on bass. The bass widely multiplied the rhythms of each song, leaving a little more space than other needier bassists between the notes so that they came in with hammer and sway. I’ve seen Cave Days play with a punk drummer before, but tonight it was nice to be able to hear the lyrics. Murphy’s themes mostly appeal to our generation of tricked lovers. For everyone raised to believe in Love, with its longevity ever more quickly slipping through our fingers as our emotionally cynical society continues to set, it’s not hard to appreciate when those passionate frustrations are sewn to song. My favorite was Eve, a song Murphy wrote about a whirlwind romance with a traveling Quebecois girl, and wishing it could’ve lasted. With eyes closed, he sang You’re the blood inside my blistered fingers/ Mouth open wide and no one’s listening, framing his exasperation.

A little lifted from the cathartic quality of Cave Days’ set, the crowd loudly requested an encore when it was over. Thomas informed them that they had no more to play that night, leaving them a little hungry, so that as the show became a party, they quickly sold out of records. 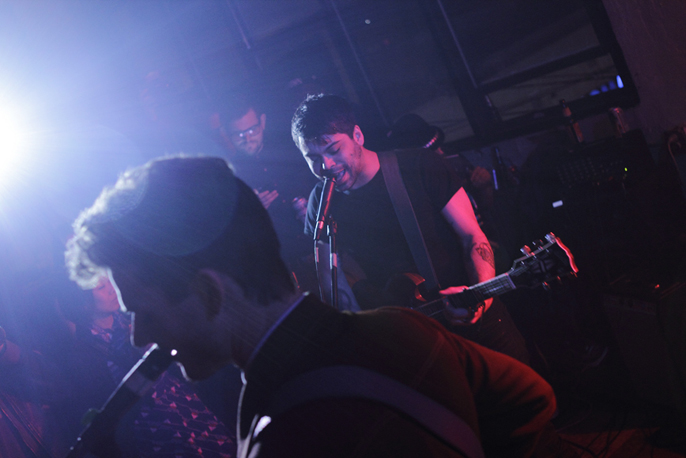 I must have been to a thousand shows by Brooklyn-based garage-psych trio Dead Sexy Sheila. There’s a reason I keep coming back. They bring an unprecedented amount of energy and devil-may-care swagger to whatever stage they have chosen to grace with their presence. On March 21st they allowed common-folk into their base of operations at Hot 97.4 in Bushwick. This night was no exception to the bedlam Dead Sexy Sheila leaves behind. Being the third act of the evening, bodies were already covered in sweat and booze. Some dude’s tank top, left with only one strap, was holding on for dear life, faces would contort into smiles and the band fed off every minute of it. 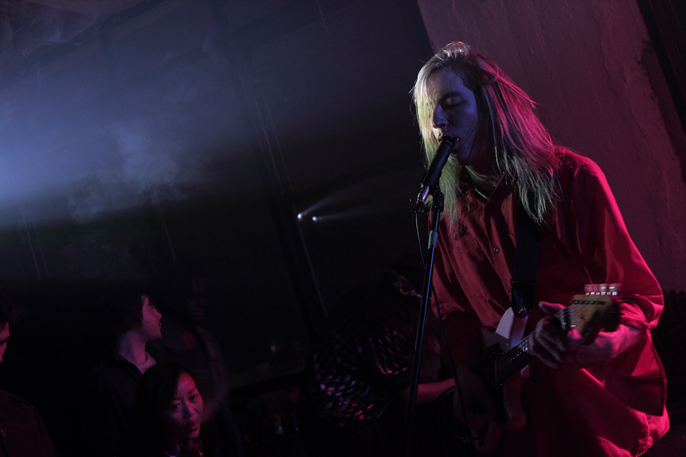 Frontman, Scott Lechner would tear through songs like “All Keys” and “Death Bat Flies” then mercifully allow you some respite with his country cadence ode to mary jane in “C’mon Baby Do Drugs With Me.” Bassist Troy Odell provided backup vocals to a point where you think his head is gonna pop off and soar into space. His pounding bass lines came bursting though in their newest songs “Mister Storyteller” and “West Maybe.” Rounding out the group is a drummer simply known as ET who may have gotten his moniker from the alien speed and movement required to play his sacred kit. 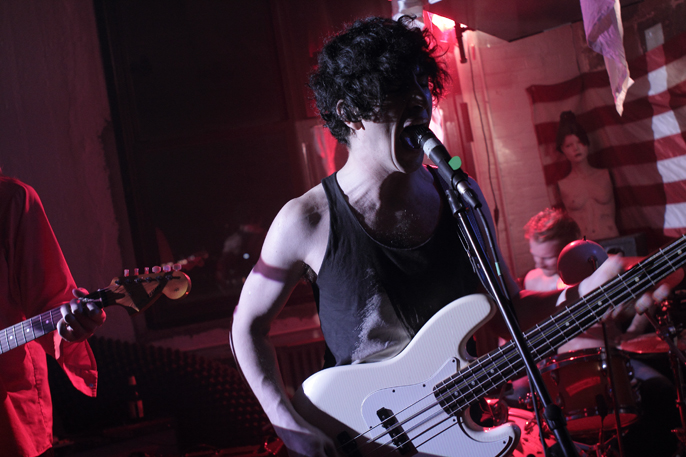 Guided by the light of a cosmic owl, these three good-ol’ boys pushed the gathered rounds into a foamy faced frenzy. And when it was all over, Dead Sexy Sheila had them chanting for more. So grab a beer and put your shirt back on, cause they’ll be at it again and again. 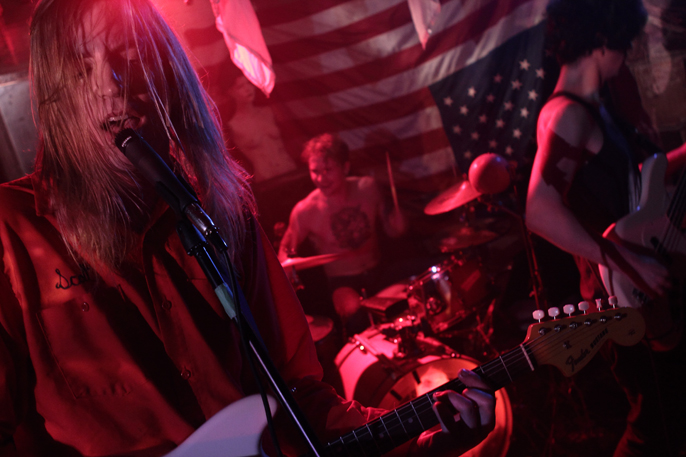 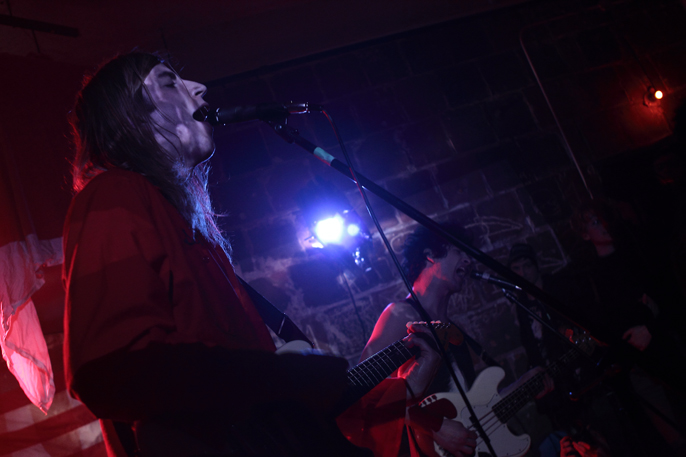