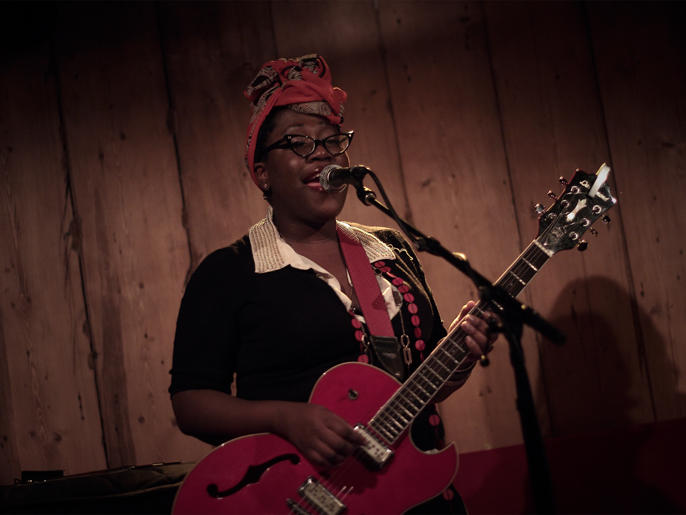 Did you know that Rockwood Music Hall has a Third Stage in the basement, and that there’s a poorly advertised $10 drink minimum? You did? You’re a highly informed reader! What about this: Did you know that the bass player bringing the funkiest chops to any stage in New York City this past Monday was a perfectly petite French fille with a uniquely Parisian nonchalance swagger sparkle clad in gold sequin shorts and a glittery top backing a Haitian Canadian-born twenty-eight-year-old singer-songwriter with a massive cult following in France and a big red guitar? Oh, you didn’t know… You may want to read on.

For just over an hour, the basement dwelling otherwise known as Rockwood’s Stage 3 was entranced by the unique stylings of Mélissa Laveaux and her big red guitar and deceptively badass bassist Else Blanchard. The duo was accompanied by the powerful minimalism of a sporadically-used drum machine, even less frequently used looper, and most notably, Laveaux’s raspy, warbling, throaty vocals. 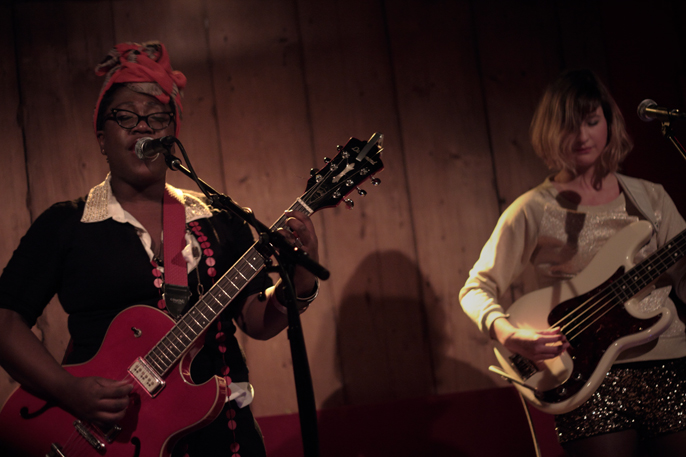 Some people will tell you that, “the voice is an instrument,” the familiar response to which is usually, “fuck off.” But there are rare cases when a vocalist is able to reach deeply enough within their creative spirit that they are able to express a sonic quality so unique or emotive that it does in fact qualify their voice as an instrument. Edith Piaf did it. Tom Waits does it. Dylan has done it. And last night, Mélissa Laveaux did it, too.

Music journalism admittedly suffers from a cancer of hyperbole (see what I did there?) and perhaps those frames of reference are unqualified. But I do not exaggerate in relaying Laveaux’s role as what my grandfather would call a “translator” — a vocalist who is able to express singularly raw emotion and energy that is otherwise unreachable. One sign of such a singer-translator is their ability to transform covers into unrecognizable transmutations, often superior to their original counterparts. Look no further than Laveaux’s traduction of Weezer’s “Hash Pipe.”

Then there was the one original song Laveaux introduced as having been written through the perspective of the tree from which “strange fruit” grows in the Nina Simone song of the same name (the same Simone song sampled in Kanye West’s “Blood on The Leaves”). To avoid sounding “like a hippie” when singing about this tree, Laveaux penned her song in a hybrid creole that apparently only one other person can understand. Such a description would not be an inappropriate metaphor for Laveaux’s vocal trademarks. She snarls and yelps and coos, drowning seventy-three percent of her lyrics in a moist, sultry bed of sound. What’s left I’m sure is poignant, but almost irrelevant — I was too transfixed by the lull of her expressive intonations to notice much of anything else. 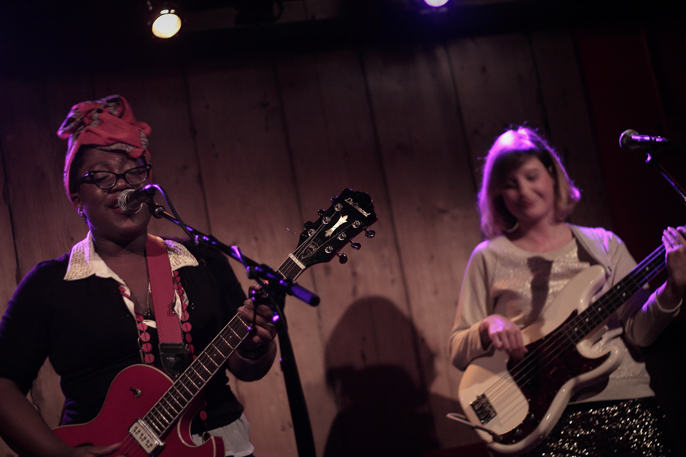 Anything else, that is, apart from badass bassist extraordinaire Else Blanchard. In spite of the power of Laveaux’s vocal incantations, my attention at the onset of this set was drawn to Blanchard’s subtle mastery of her instrument. I can assure you, I’ve seen a lot of shit. I’ve also seen a lot of music. And yet, several times throughout the night I mouthed to myself, “What the hell is that?” as I watched her wiggle and waggle all over that bass like she was giving it the business. Just as quickly as you can say “hurry up with my damn croissants!” she’d switch from grungy walking bass lines to laid back grooves, from backseat harmonic chords to reverb-drenched punk staccato recalling The Stooges. She moved so seamlessly and subtly through a plethora of genre references that I couldn’t tell if she noticed or if it was even intentional — a kind of natural poise that signals a truly gifted artist.

Laveaux and Blanchard shared a refined subtlety, but the stage personalities of these two musicians are so starkly contrasting it’s almost satirical. And yet, it works. It works soooooo good. Wherever Blanchard went with her shiny gold outfit, Laveaux followed (or, to be fair, vice versa) with her Caribbean-style head wrap. The result is a gumbo of meddled sounds, equal parts vocal dynamism, mystery bass, dingy drum beats, and flossy reggae licks. While it’s true we live in a dysfunctional musical era chronically over-categorized, such a distinct sound deserves a distinct name. Allow me to humbly posit “industrial creole disco,” a conglomeration of worldly and ostensibly clashing sounds that Laveaux fuses into her otherwise tranquil soul music.

Maintaining such a unique sound does have its pitfalls, which were on display that evening. Acts with as specialized of a sound as Laveaux’s are often lulled into the insidious sense of security in staying within the comforts of their own sound. This lack of creative leaps puts the performer at the brink of boredom. Indeed, there were very few spikes of energy during Laveaux’s Rockwood set, and even fewer attempts to deviate from her singular sound or explore it more deeply. As captivating as it is, Laveaux’s vibe is too inoffensive to not take risks.

She committed several other cardinal faux-pas of performance throughout the evening — leaving guitar reverb on during banter, not fully introducing her songs, spending way too much time talking about the alcohol she was drinking on-stage, and generally overchatting the audience — and perhaps the biggest error any professional singer-songwriter can commit: closing the show with a cover of Jeff Buckley’s “Hallelujah,” which is too amateur coffee house for Laveaux’s considerable talent.

Taking this sin in stride, my evening with Mélissa Laveaux at Rockwood’s Stage 3 basement dwelling was largely satisfying. But I was left with several questions: What would you two sound like in a different venue, like the massive festivals you play in France? Or backed by the full band you normally tour with?

Who the hell else was in that audience with me?

Then, finally: Else Blanchard, where do you get your clothes? How’d you get so funky? And can I have your number? Please? 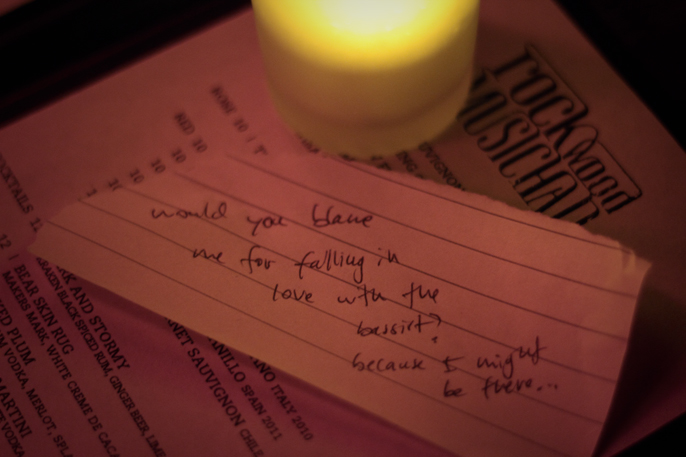