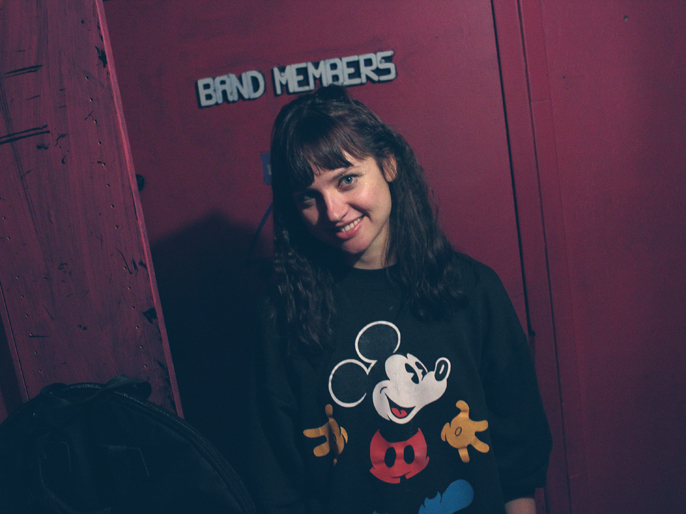 Music loses life in New York City when it snows.

A notoriously fussy bunch, New Yorkers are often afflicted by inclement weather-induced lethargy, especially when a snowstorm strikes by surprise like it did last Monday.

That same lethargy coaxed me into committing music writing’s cardinal sin: arriving late to a concert. Little did I know, this particular concert would call upon the power of the cosmos to instill in me an uplifting change of spiritual winds in a story of faith, faith lost, and faith found again.

When I arrived to Arlene’s Grocery, Anya Skidan was already a few songs into her set. I knew next to nothing of Skidan, only what little information my online investigation had yielded a week earlier. I knew she was a fan of Devendra Banhart, one of the permanent deities on my rotating altar of musical worship. I knew she was deeply spiritual, thanks to a self-penned Bandcamp description that reads: “Wisdom covered in sounds transcended through the beating heart of the present.” And from the three songs she offers via Bandcamp, I could gather that she had an airy, refreshing sound. These factoids intrigued me enough to lure me out of hibernation in my Bushwick cave forty minutes away and brave the snow to see what was what. So there I was.

And there she was. Propped behind a classy vintage Casio and backed only by a drummer, Anya Skidan immediately challenged me with an unplaceable sound and a dreamy persona. The harsh realities of winter must have clogged my musical chakras, as I was initially immune to her whimsical charm. I spent the remainder of what was presumably Anya’s third song trying to find a way in, but I wasn’t made to wait very long.

Skidan gave the audience a brief disclaimer that she had recently been traveling a lot, and explained that her next song would be a traveling heart’s ballad. Those few words did not properly prepare me for what proved to be her unique take on a harrowing blues anthem. She sang in sparse, operatic fashion over mystical carnival instrumentation. An eerie organ muddle at times brooded, then happily glided over intense head bobbing drums. It was as if someone replaced the white keys on her Casio with sticks of bubblegum and inserted the wings of bats in place of the black ones. The collective feel of the ballad amounted to an elusive and restrained chaos that never seemed threatening. Instead, Skidan’s poppy melodies infused those troublesome blues with enough happy-go-lucky charm to make ostensibly somber music rather comforting, even while she wailed delicate pleas, such as, “Where are you looking? Where do I go? How do I know you will be coming back?”

I was no longer intrigued. At this point I was in slowly increasing awe. 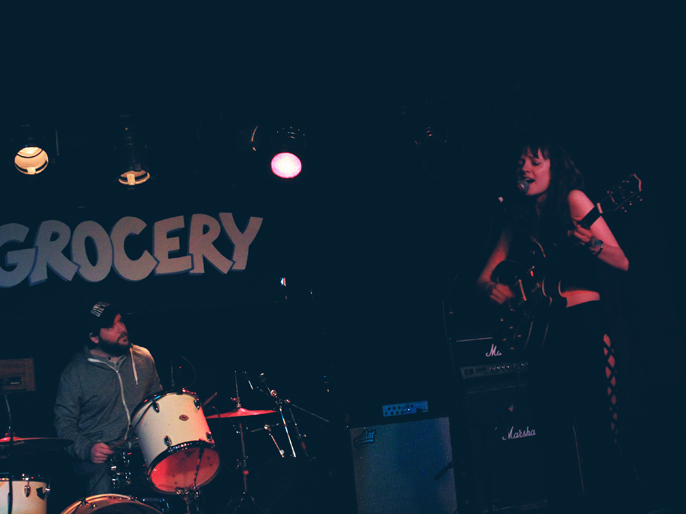 Skidan segued into her next song by asking the audience what they thought of “Shasta.” She suggested it was beautiful. “Shasta? What is Shasta?” I thought to myself. To my surprise, the audience accepted her proclamation without much confusion. “Shasta is a powerful mountain in Northern California,” she clarified to one annoying audience member who interrupted her banter for elaboration (spoiler: it was me). “It is one of the chakras of the earth,” she explained as casually as she had first mentioned it. Shasta?? Who is this girl?

It was only then I took note of the glistening green glitter speckled delicately on her eyes. Other curiosities quickly became apparent. She whimsically danced along to the imposing reverberation of her organ with such harmony I started to think it might be emanating from her being rather than the instrument itself. Shasta?? Was Anya born from this mysterious place? Was she a mythological imp? A nypmh? An Anya?

“Shasta” shared the same trademark qualities of the song that preceded it: wispy organ, conflicted emotion, and bluesy drums. Her next song, though, marked a transition. She floated away from her keyboard to the other side of the stage where an acoustic guitar waited for her embrace. Again, she sang a song that broached the subject of love. Her lyrics described the world and her lover’s effect upon it through eyes of inspiring childlike wonder.

She’d marvel, “You make me see the warmth with my eyes.”

Or, “Let’s dance all night to heaven.”
I have a ponytail, and I have a beard. But in spite of appearances, I actually know very little about chakras. If there is a chakra dedicated to love, and I hope there is, I could feel the ice melting around mine. 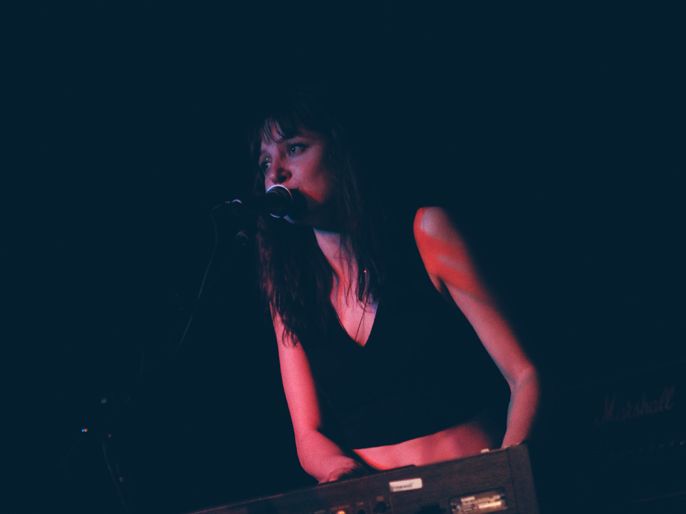 Another seamless transition across the stage and she was back behind her Casio. The temporary pause in incantations released me from Anya’s spell long enough to be able to take note of some pretty handy piano work. From what I could deduce, the mechanics behind her two-part supernatural organ consist of a kind of walking bass line way down low that provide a rumbling base over which high-octave arpeggios on a synthesizer effect would nimbly dance. The combination of the two requires a ragtime-like sense of coordination and syncopation. Spiritual superfluidity aside, Anya has got some serious piano chops.

Those piano chops, featured heavily in this next song beside the relentless accompaniment of Brandon McClaskey’s drums, started to shake the room. Let me repeat that for effect. A piano, a drum, and Anya’s ethereal vocals started to shake. the. room. Either the sound system at Arlene’s Grocery is incredible, or broken, or Anya Skidan was harnessing the forces of Shasta and releasing them through her music. 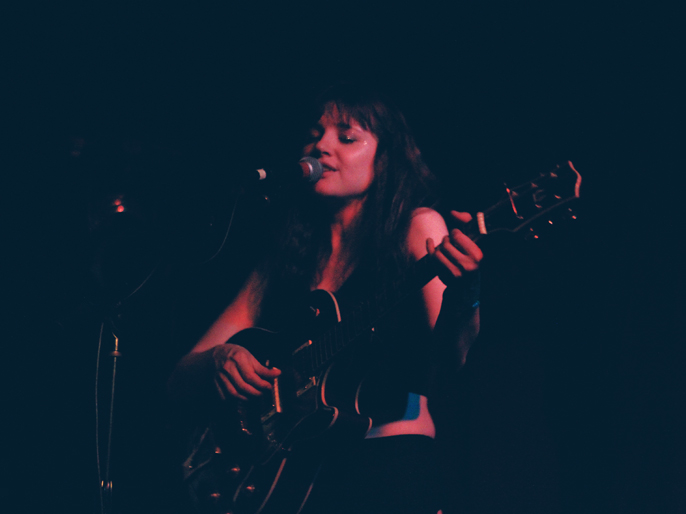 Incidental spiritual awakenings are merely an unforeseen bonus of working as a concert critic. It is my job primarily to describe music, but breaking down Anya’s style is much harder than being inspired by it. I almost automatically associate music featuring schmaltzy synthesizers made past 2012 with dream pop, or some uninventive revivalism of mundane 80s dance music, but her music is far from it. So we must look elsewhere. Anya borrows lightly from several genres, psychedelia and folk mostly, but she never stays within the confines of any one long enough to justify a hyphenated multi-genre tag. Perhaps we can look to another genre-transcendent artist, Devendra Banhart, who channels a comparable, playful spirituality? Anya’s siren-like warbling wouldn’t be out of place in his vocal repertoire, nor that of Banhart’s genre compatriot Joanna Newsom. Whatever music Anya writes, it clearly comes from a place of purity and tender spirituality, and I believe such musical sincerity merits classification. So let’s invent one: chakra pop. Or, more accurately, chakra-blues pop.

I wasn’t given much more time to dissect her music before Anya’s set came to an abrupt end. It’s true that most good live music can draw you in so deep as to alter your sense of time. But this felt different. It seemed like only several moments had gone by. It seemed like I had been there for an eternity. 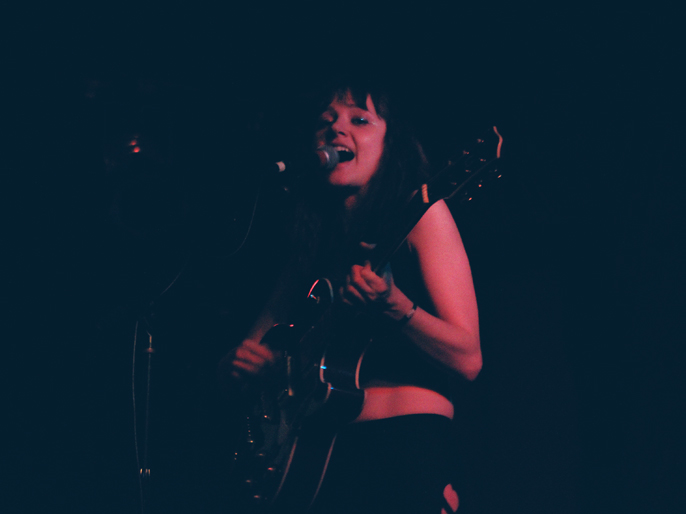 My time spent with Anya Skidan left me with more questions than answers, but of one thing I was certain. During her set, the formless spirits of Shasta had crept their way into my chakras, some whose existence I was unaware prior to their awakening, and activated a dormant spirituality. Sure enough, in brief conversation with Skidan and McClaskey, the latter revealed that while their style of music is out of his normal comfort zone (he’s part of the bluesrock Black River Collective), he was drawn to it because he felt it had somehow awakened a part of him — the very same praise, incidentally, given to early music of Devendra Banhart. I politely agreed with McClaskey, walked outside, and felt the wind blow against my skin.

I looked around. I saw the pixie dust falling from the sky, onto the ground, and I wondered where all the snow had gone.

Anya Skidan will be playing next at Muchmore’s this Sunday, January 26th, The Bitter End January 29th, and Friends and Lovers February 2nd. More on Anya Skidan : bandcamp : facebook : twitter